I finished work early and drove Craig, Ivan, Pip, and Julia out to Glentui where we did the canyon there. 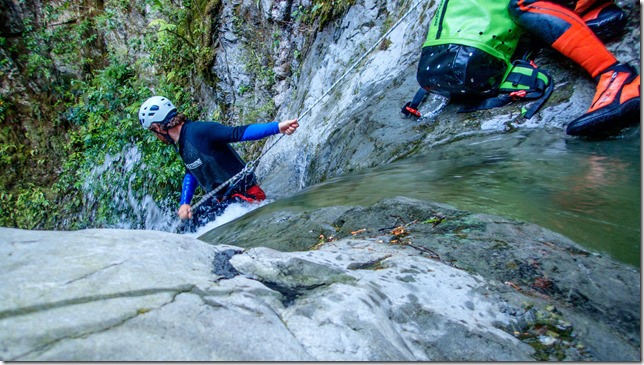 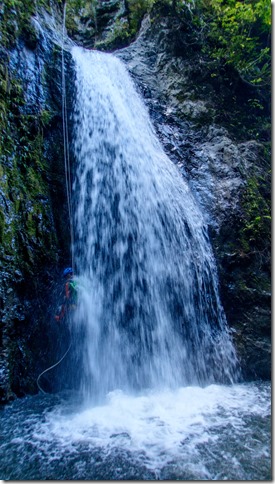 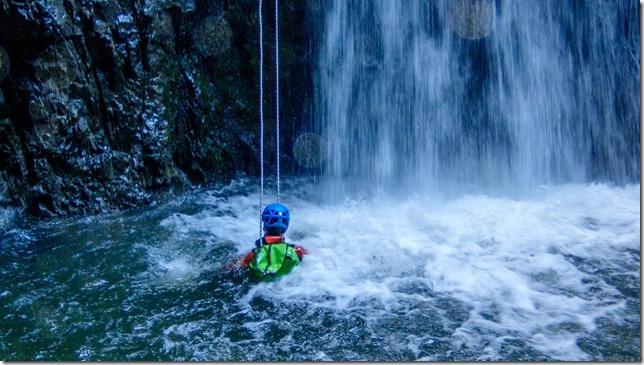 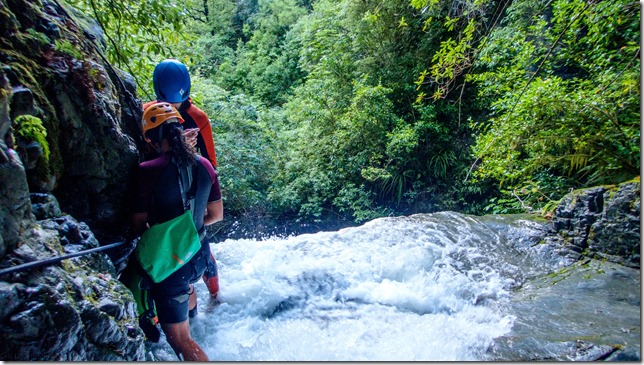 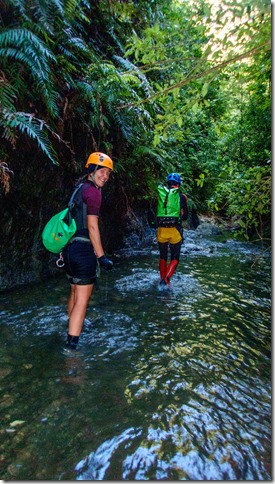 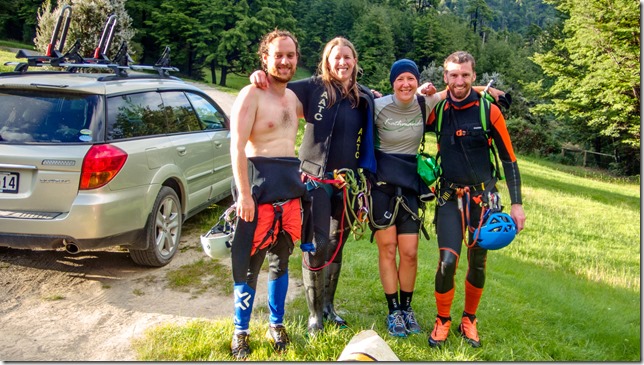 1) Ivan went first and checked out the flow.

2) Craig came down last with the rope bag.

3) We pulled the rope through and fed it back into the bag.

4) Craig set up the abseils for us.

5) The canyon is quite short with just a few features and then a walk down the river.

6) We were finished with plenty of daylight left.

Katie and I drove down to Wanaka to meet Jeremy who was already there learning to fly fish. Annu drove up from her pad in Te Anau the following day and we headed to Makarora to walk the Gillespie Pass loop.

We set off from Makarora crossing the Makarora River, which was happily nice and low. The walk up the valley was a mix of paddocks with cows and native bush. We arrived at the Kerin Forks Hut in the evening after crossing the Wilkin River and finding a nice deep spot to get Katie wet to chest height. The hut looks out from the edge of the native bush back down the valley. 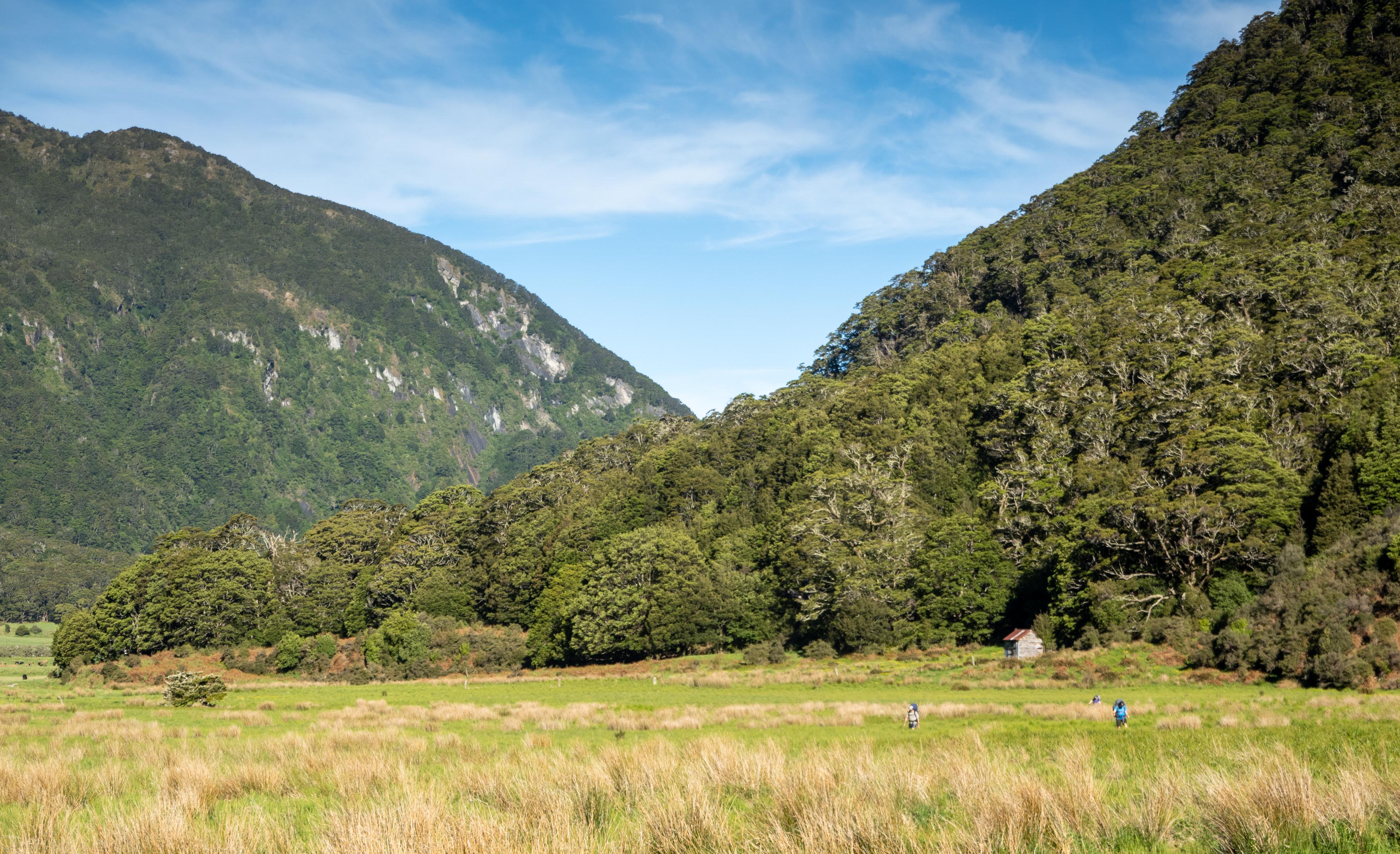 Above: We fought our way through a bog created by the cattle that are allowed to roam and poop in the Wilkin River. Lovely.

It was a short day. We crossed back over the Wilkin River and located the track in the bush. We followed it and it took us up the side of the hill and around into a valley. It was warm and sunny again, really nice conditions. After a few hours we arrived at Siberia Hut. We spent the rest of the day faffing around the hut in the sunshine. Jeremy, Annu and I went swimming in the waterfall near the hut while Katie had a nap. 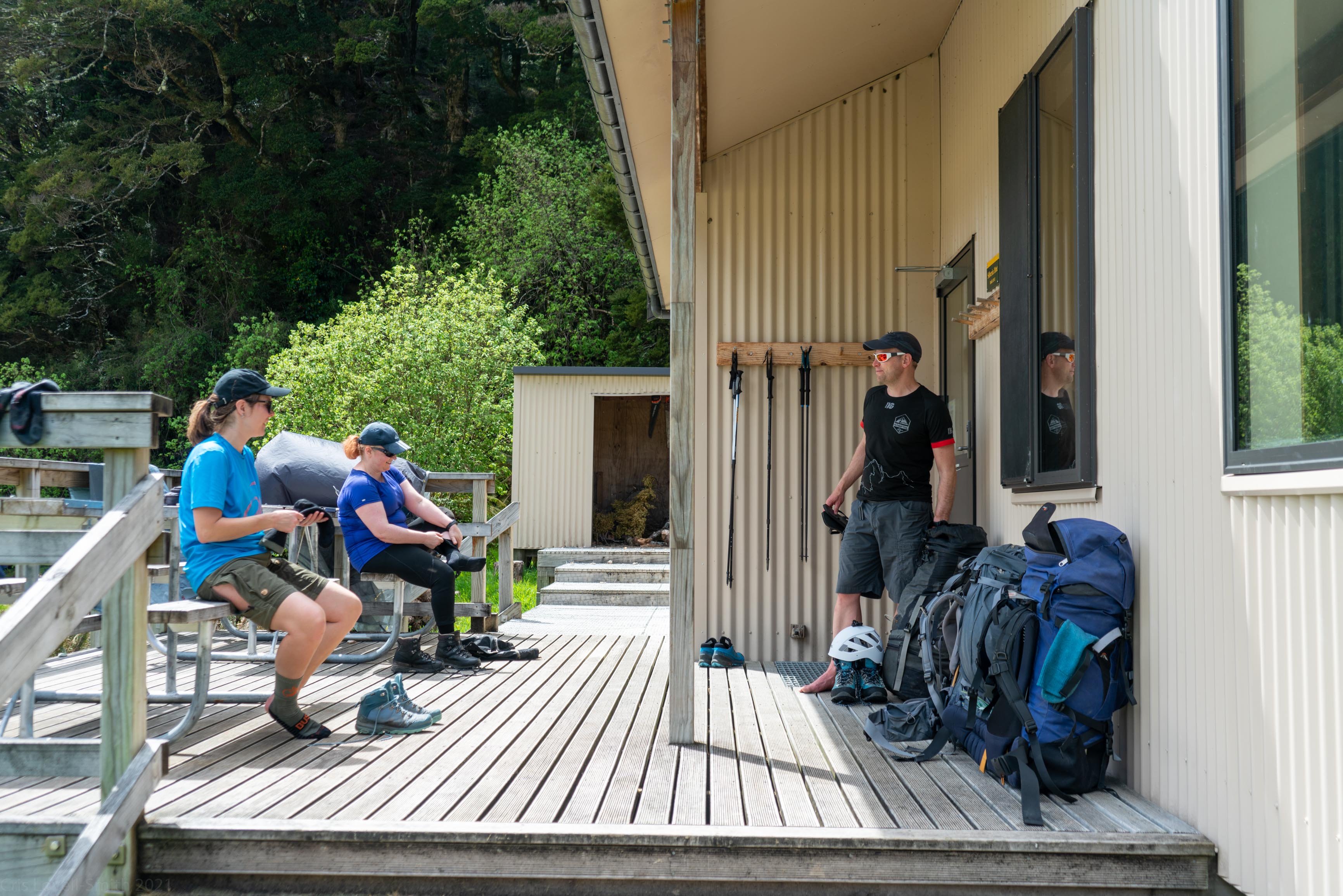 Above: We spent the afternoon relaxing at Siberia Hut.

The blue sky was leaving and and so did we. It was going to be a long day so we left Siberia Hut early in the morning. The walk up to the pass was steep and we took a lot of breaks. There was snow at the top of the pass, slushy snow. We had crampons with us but they weren’t needed due to how soft it was. Instead we stomped up to the pass. The clouds opened for a little as we walked through the snow and we had a little bit of sun and blue sky before the grey returned. We took a bunch of jumping photos on top of the pass as that’s the sensible thing to do. The descent down to Young Hut was brutal on the knees. It’s very steep and you can see the 1000m descent down into the valley while descending. We stopped for a bit at one point and lay in the grass while Katie had a late lunch. 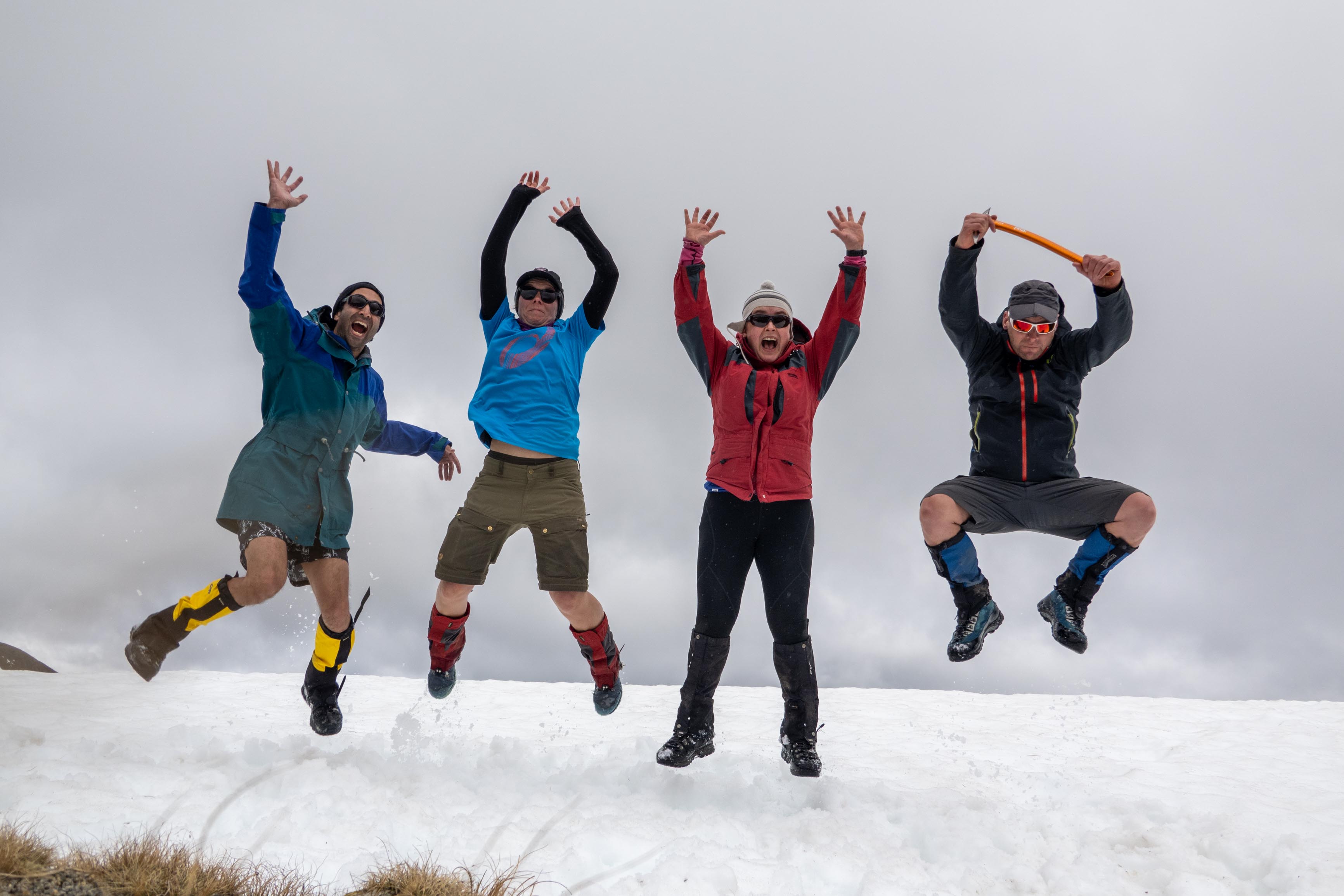 Above: There was ample opportunity for jumping photos.

It still wasn’t raining! We walked out down the track. I went ahead and got the cooker going beside the river where we had a long morning tea. We continued out along the track and crossed the Makarora river which was much lower than we expected, around knee height at its highest.

We drove back to Jeremy’s Wanaka base for dinner and Annu headed back to Te Anau.

Above: A video of our trip over Gillespie Pass.

Map of trip on NZ topomap 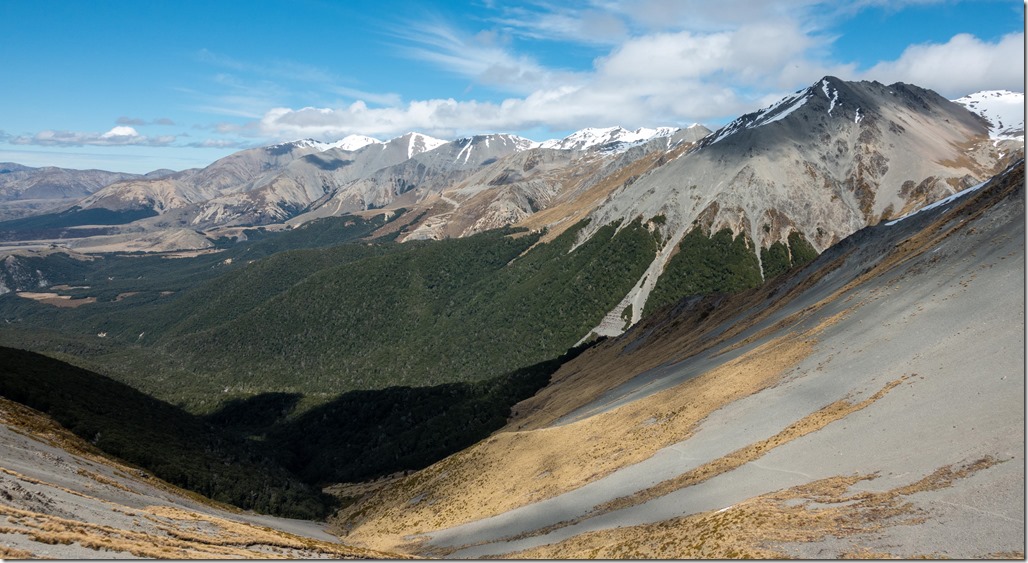 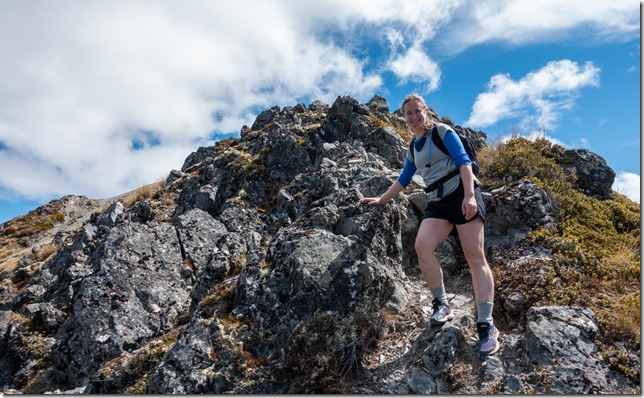 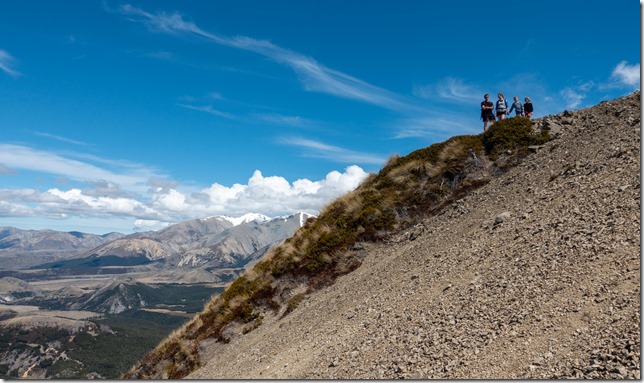