Leonie and I went and checked out the Indianer via Ferrata in Netstal, Switzerland. It’s a fairly short C rated route with some nice things like a tunnel through the rock, a tower, and a flying fox (zip line). It’s a 15 minutes walk to the start of the route from the road. There’s also a couple of sport climbing routes at the start.

The route ascends for maybe 15 m/20 m and then there is a telephone stuck to the rock. Interesting…

Following this you climb through a tunnel in the rock and then ascend steeply again. Another ascent and you’re standing on a tower of rock with the Swiss flag. From there, there is a bit of a scramble down and around one side of the tower to a “flying fox”/”zip line” or whatever the internationally accepted English word for this is. Leonie found this section a little unpleasant but I think she was pleased to have done it all the same.

According to The Internet the next section was supposed to be a little more difficult. Leonie opted to take the emergency exit, an option that took her quickly to the end of the via ferrata. After taking this option with her I returned and finished the rest of the normal route. It was a little more difficult but not too bad. I think it would feel a bit sustained for people who don’t regularly go sport climbing. The last section was very slightly overhanging and required some arms.

From the top we followed the path back down to the car park below. A very nice via ferrata. Well worth doing. 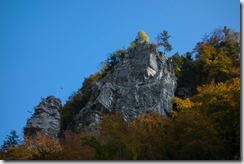 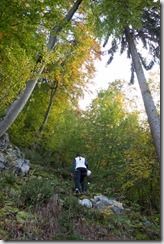 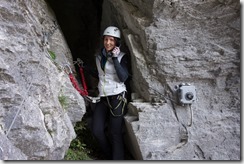 Above left: The via ferrata starts on the left hand side behind the tower, climbs up onto the tower, crosses to the main rock and then traverses around to the flat rightwards facing slab before ascending to the top. Above middle: It’s about a 15 minute walk from the road to the start of the via ferrata. Above right: Leonie tested the telephone about 20 metres into the climb. It seemed to be out of order. 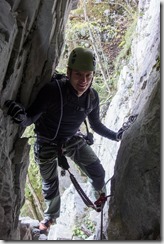 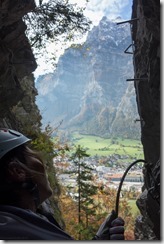 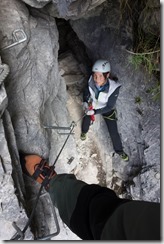 Above (1): Just after the telephone there is a climb through a tunnel in the rock. Above (2): Then it heads up again. Above (3): Leonie waited as I went up to inspect. 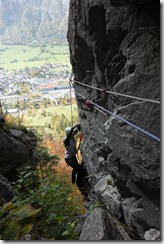 Above: I belayed Leonie on parts to keep her feeling safe-ish. 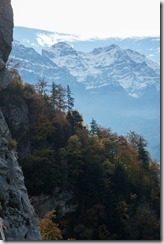 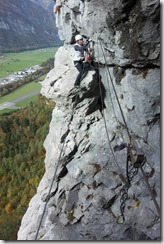 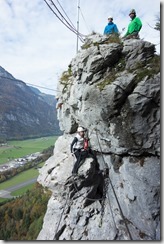 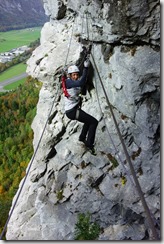 Above (1): The view isn’t bad. Above (2): We climbed up onto a tower and then down slightly and around the side of the rock. I was happy to be clipped into the metal rope as it felt quite exposed. We climbed around to a flying fox that Leonie thought looked a bit spooky. It did feel a bit spooky but once I was over the side all was fine. Above (3): Some Swiss guys waited for us on the tower while we sorted ourselves out on the flying fox. Above (4): Leonie didn’t really have such a happy face as she slid across but it was just a short distance across the void. 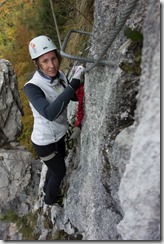 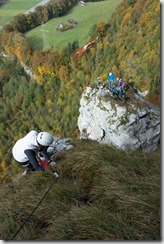 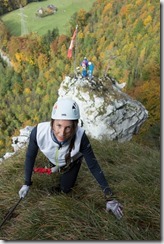 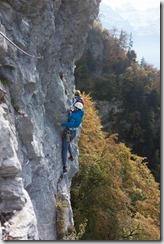 Above (1): Leonie looked a bit happier on the other side. Above (2):  The Swiss flag flapped in the breeze as we took the short cut to the end. Above (3): Happy face again. Above (4): I went back down and completed the via feratta following the two Swiss guys. 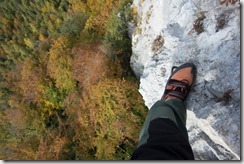 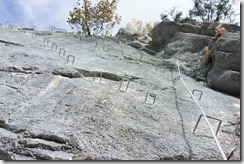 Above left: Looking down. Above right: The last section was steep and a little sustained. It probably helps if you’ve been climbing a bit recently. Luckily that was the case.