Leonie, Markus and I camped in Tannheimer Tal on Saturday night and today we rode the Radmarathon Tannheimer Tal. Markus did the 130 km course and Leonie and I the 220 km.

We arrived at the start line surprisingly early. Instead of getting there a few minutes before the start like at the Mondsee Radmarathon last weekend we were there a full 40 minutes early. Since there aren’t any start blocks this meant we were near the front of the race. Leonie had run a mountain marathon yesterday and had got 3rd place in her category she assured me that she would be riding slowly.

The race started and I tried to focus on pacing myself but decided I shouldn’t ride too slow either so stuck around in one of the front bunches when they formed. We had a pretty high average speed all through the hilly climbs in Allgäu. I decided to try and hang on until Riedbergpass. Then I told myself I should ride my own pace up to the pass. I stopped at the bottom of the pass briefly for a banana from the drinks station. I was quick but this put me to the back of the bunch. I started climbing but the bunch was already riding off and I didn’t want to push too hard so early in the race. Instead I stopped and emptied more fluid out of me than I thought had gone in. This put me further back. I climbed at a relaxed pace and by the top of the pass there were only a few people around. The bunch was long gone.

I descended and collected a few people and we worked in a small bunch down into Bregenzerwald. I was beginning to notice that something wasn’t right. I was feeling dehydrated somehow already. I decided I’d made a mistake adding so much cola to both of my drink bottles. We cycled along the flats towards the climb to Hochtannberg Pass. I made sure I got some pure water at the next drinks station and then the climb slowly began. It was too hot. I was sweating. Parts of the ascent were still in shade which was nice but the sun had reached most of the road. Something still wasn’t right. I was suffering up Hochtannberg Pass very slowly and being passed by many people. It felt much harder than last year. Had I just not eaten enough? Or was it the sugary cola mix that wasn’t doing my stomach so good? Or should I have cycled less during the week after the race last weekend?

I had already decided I wouldn’t be faster than last year.  I was quite low on energy and hungry by the next drinks station. I spent five minutes there stuffing myself full of bread, cheese, various sweet things and drinking lots of water.

The descent began and I rolled down finding a couple of others after some time. I foolishly let a few more up the road get away thinking I’d catch them later on in the descent but in the end they formed their own group and I worked with two others. We could see a few more people further in front of us but the other two were relatively weak and when I rode faster they would drop off. I didn’t have the legs to catch them myself. We caught up to two women. We rode down the Lech valley crawling along at 30 km/h which was much slower than last year but this was understandable as we were fighting with a strong head wind and unlike last year we weren’t drafting a vehicle in front of us. At some point a bigger group caught us up and things improved a little.

Still it wasn’t optimal and I had to work at the front a bit. Nobody was particularly speedy. We got to the last climb up Gaicht Pass. I was a little slow in the climb and fell off the back of the group to begin with, however, later I got into a rhythm and wound them back in just in time for the small descent in the middle of the climb. The rest of the climb seemed easier and we got to the rollers on the last few km to the finish. Unlike last year where one strong guy pulled Markus and I to the finish the bunch wombled along at 30 km/h. We got to road works by the Haldensee and were slowed down by vehicles in front. I rode past the vehicles and another guy followed. I started to ride hard. Another guy caught up and the three of us rode together. Again we were too slow and I pulled again for a bit to increase the pace. One of the others who looked like a sprinter then took the lead and pulled at a good speed. We got to the last corner before heading back to the finish line. I didn’t want to spend anytime at the front on the last 1.5 km so that I’d have a good sprint. Luckily “the sprinter” continued in the lead and on the very last corner I passed on his left as we both began sprinting to the finish.

We crossed the line in around 7 hours 39 minutes, around 18 minutes faster than last year. Although I had improved my time I wasn’t convinced the race had gone so well. I was happy with how it went up to Riedberg Pass. I had a good group, however, they rode away on the climb and I made the decision not to try and stick with them. Perhaps that was silly as I didn’t really have good bunches for the rest of the race. I also suffered much more than last year. I’m not sure if it was the heat, that I was trying to ride faster, that I didn’t stop for as long or as often at the drinks stations, or whether I had done too much cycling leading up to the race.

To my surprise as I was cycling back to the campsite. Leonie came riding along in a bunch towards me waving. I turned around and waited for her at the finish line. She got an impressive time of around 8 hours 10 minutes giving her 10th place in her category. Not a bad weekend of racing for her after placing 3rd in her category for the mountain marathon the day before. 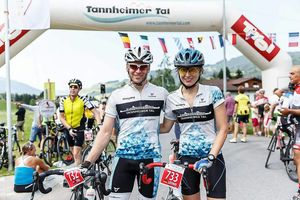 Above: Us at the finish line. 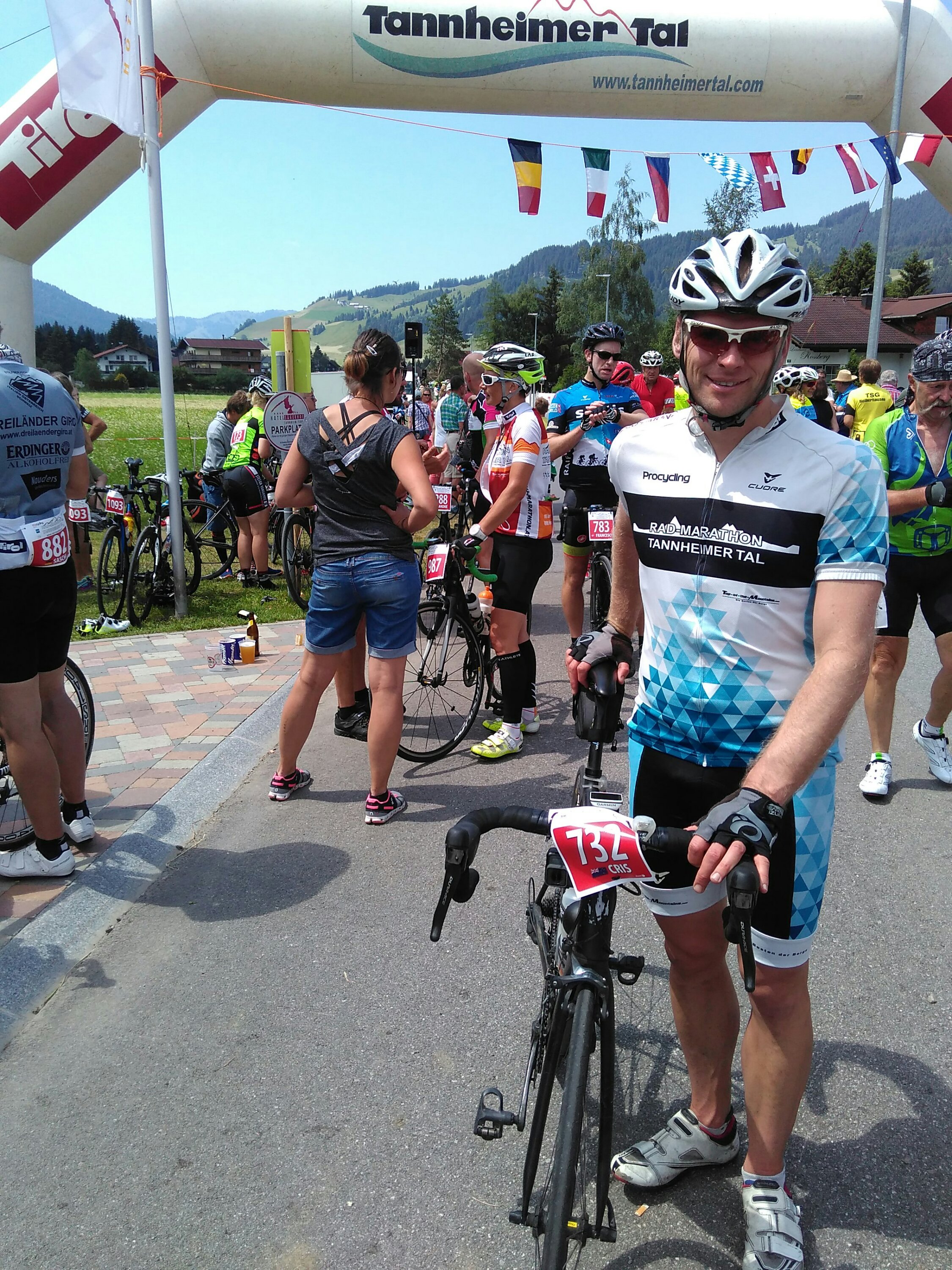 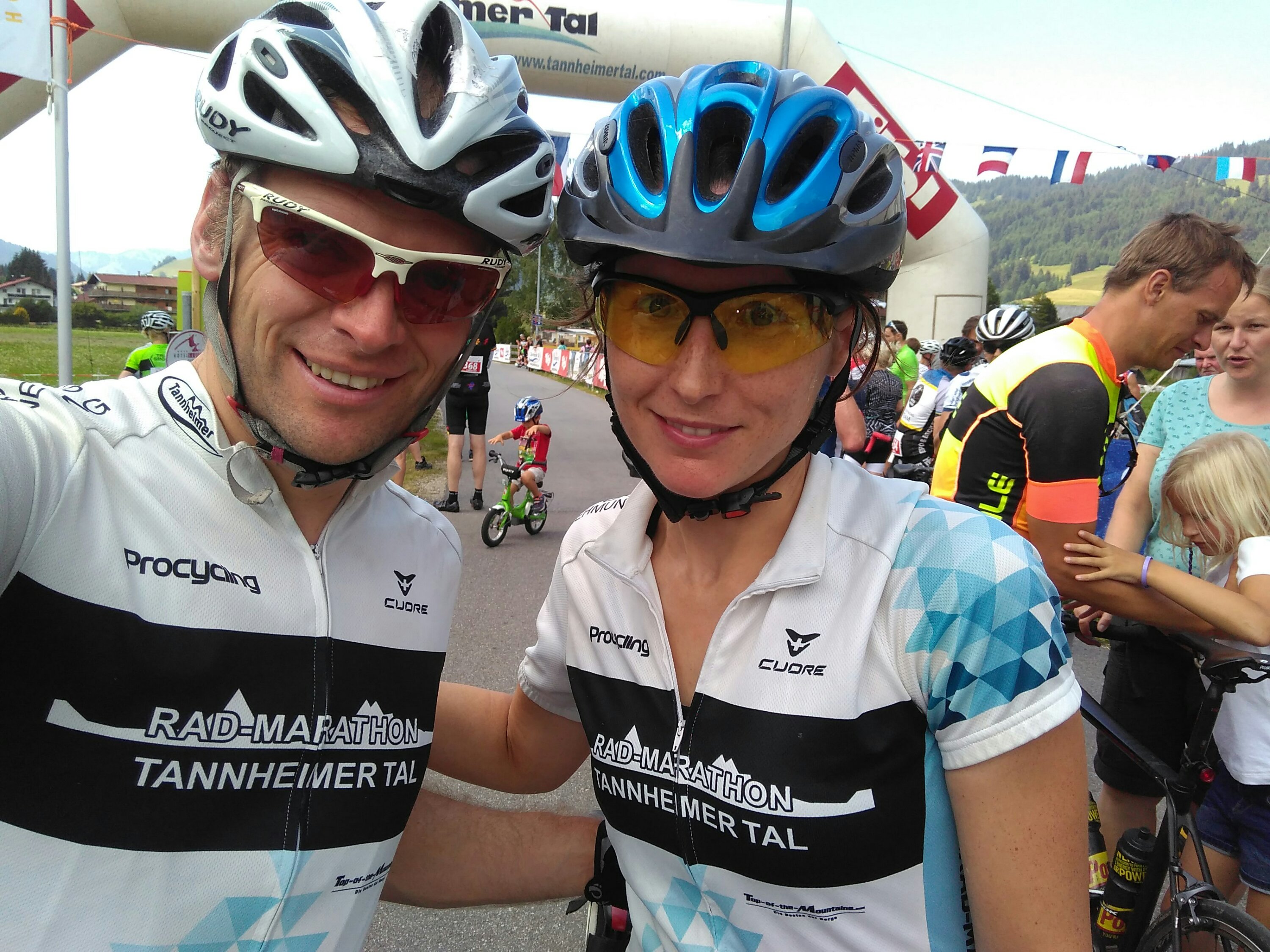 Above: Us at the finish line again. 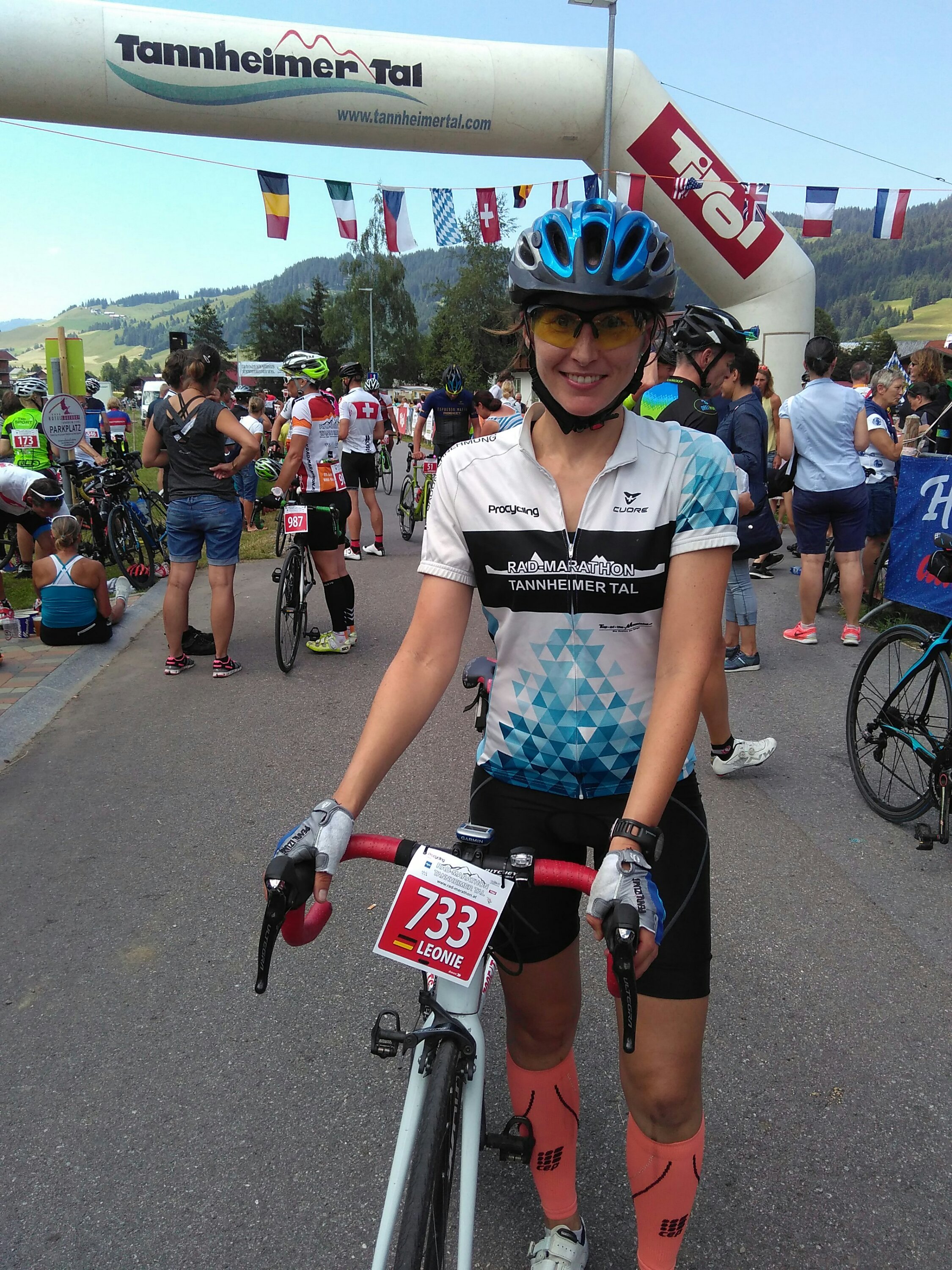 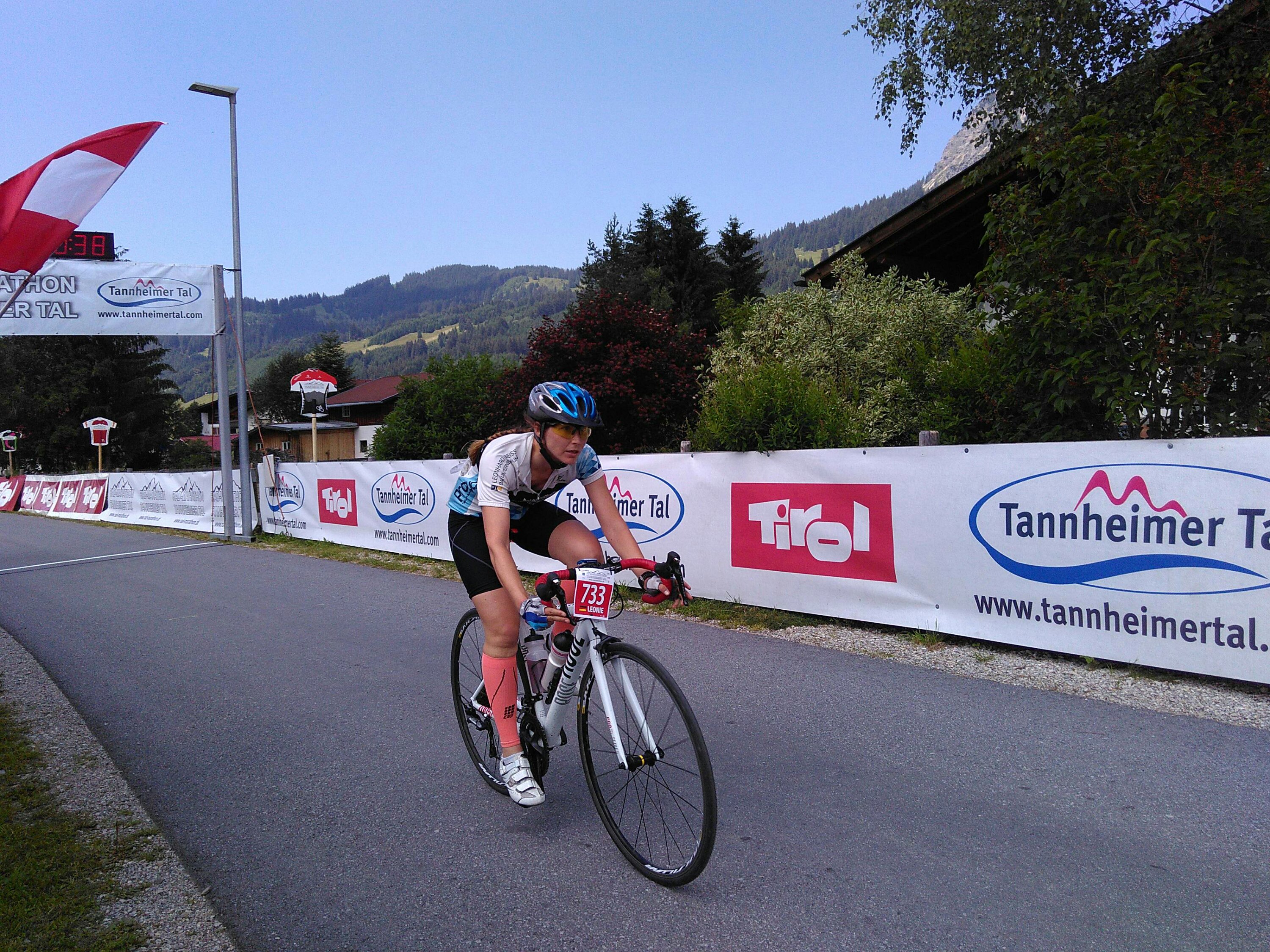 Above: Leonie at the finish line.

Above: A short video of the race.

Above: Strava’s words on the matter.