We cycled down the valley for a couple of hours until we arrived in Lom where we headed straight for the famous Lom bakery and were disappointed to find that it was closed. Disaster, no fruit and nut bread for us. This had been one of our primary goals for coming back to Norway. We changed plans and decided to stay the day in Lom so that we could visit the bakery in the morning. 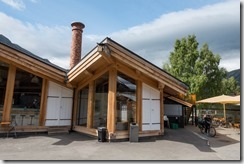 Above: Oh no, the Lom bakery was closed when we arrived.

The sun was out by the time we left the hut and collected Craig at his tent down by one of the lakes. We went and checked out the Fieldfarehytta. It was a hut used in the war by three Norwegians to hide from the Germans. There would be no hiding today. It’s built against the cliff down by a lake and is hard to pick out if you don’t know it’s there.

We then headed away from the lakes following a winter route through the hills. We got a bit confused by the trails that weren’t marked on the map but managed to not get too lost. The last few hours were spent walking along the edge of a turquoise lake.

We reached the road in the evening a few kilometres away from where we started. We walked back to where we had camped in Billingen and Craig headed up the road to Grotli where he would catch the bus at midnight. I cycled back up the road and met him late in the evening to cook dinner before cycling back to our campsite and crawling into bed about midnight. 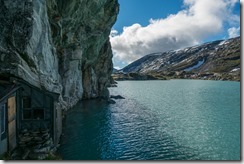 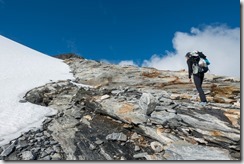 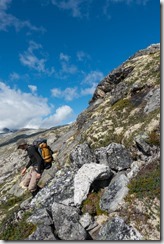 Above left: Not far away from Veltdalshytta was another hut down by the lake that was very small and had been used in the war to hide from the Germans. There was no hiding today as Leonie had a look at it too. Above middle: The sun was out and we took a winter route back out of the park. Above right: We managed not to get lost despite the route markers going off in a different direction.

Above: There were a number of very pretty lakes on the way out.

The weather was pretty average again so we fluffed around at the hut until 1 pm when it looked like there was a bit of a break in the rain. We walked to Veltdalshytta hut which turned out to be a 50 bunk mansion. The walk was nice except for the rain that returned. There was a nice view down to the lake during the descent to the hut. 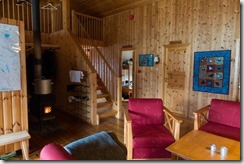 Above: We found another hut that was more of a mansion in the mountains and certainly nicer than our flat.