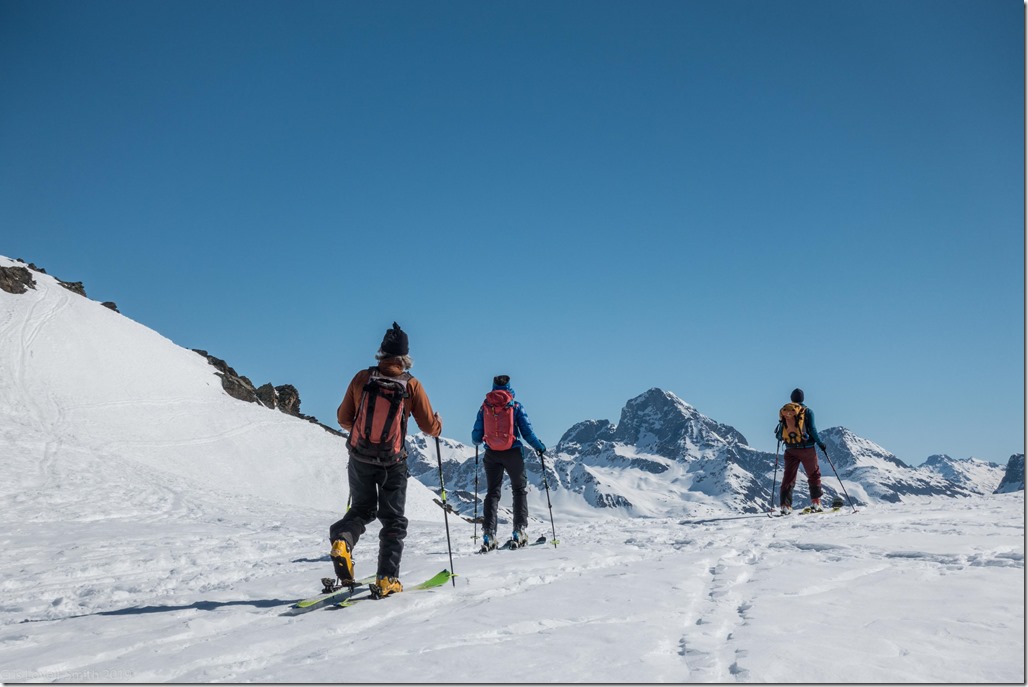 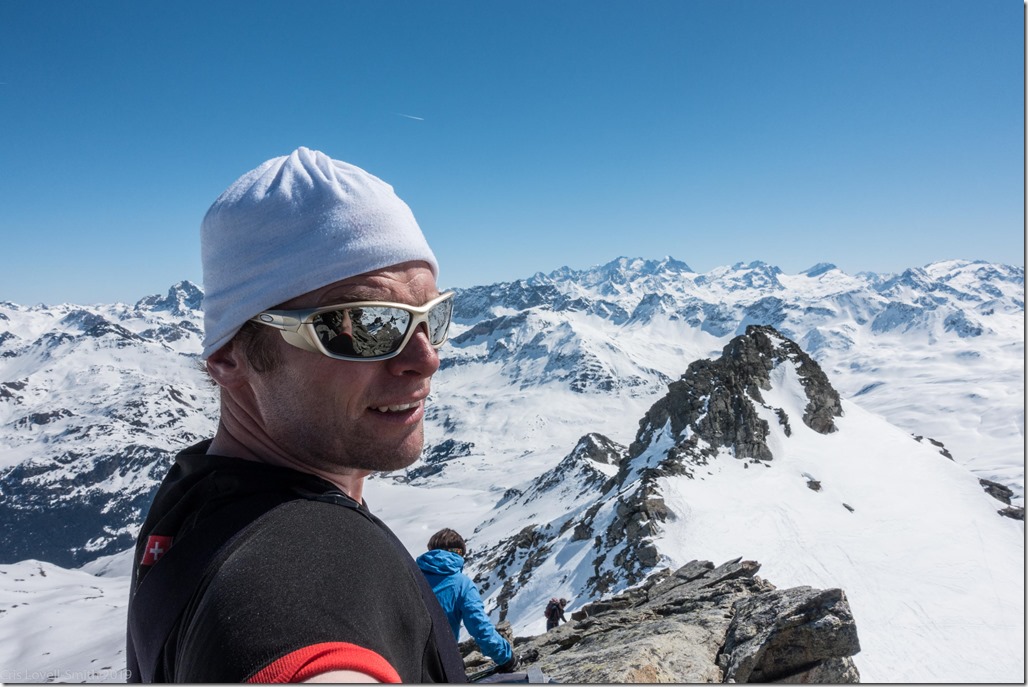 Another sunny cloudless day. We headed off up the south facing slopes, avoiding the grass poking through the snow in places. The snow was hard as the sun was only just starting to warm the slopes. We used our ski crampons to stick to the snow. 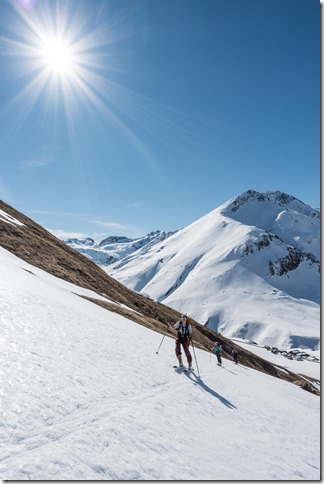 Above: More amazing weather. Day 3 took us up towards Piz Platta.

We crossed a steep slope and then ascended another. Roland measured 37 degrees as we ascended. A flat bit and then another very steep ascent which was made more comfortable with ski crampons. We reached a bit under the cliffs where we could remove our skis. From there it would be a steep climb with crampons and skis attached. Birgit said she would go down and I said I’d join. 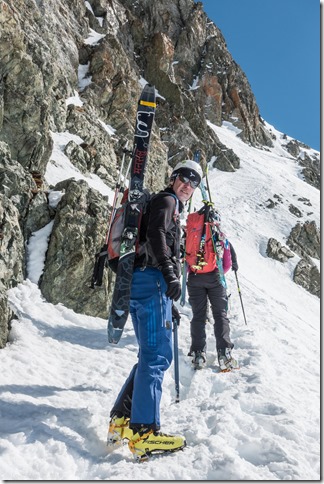 Above: This is the point where I turned around. You can’t see it in the picture but the slope drops away very steeply to the right. The next section looked very steep also. 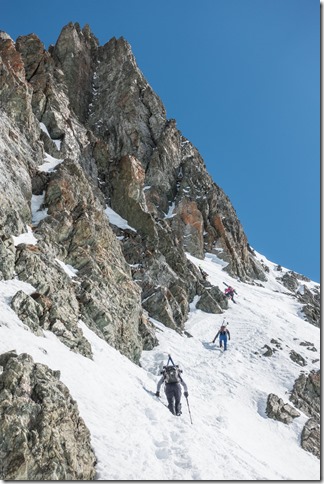 Above: Helga, Roland and Elmar continued and Birgit and I headed back down.

The others strapped their skis to their packs and continued climbing. We watched them go and then skied down the steep slope. I was happy not to have gone further. It looked very steep and a fall would have not ended well.

The snow had thawed out and we had nice spring conditions on our descent. We took a different route down making tight turns in the soft snow. At some point we came across a slope that was powder and we put our skins back on and ascended to a small peak at the top. Then it was a delicious powder descent into a snow filled river bed. We skied out to the true left and traversed around the side of the mountain stopping for a break in the sun by a small hut. 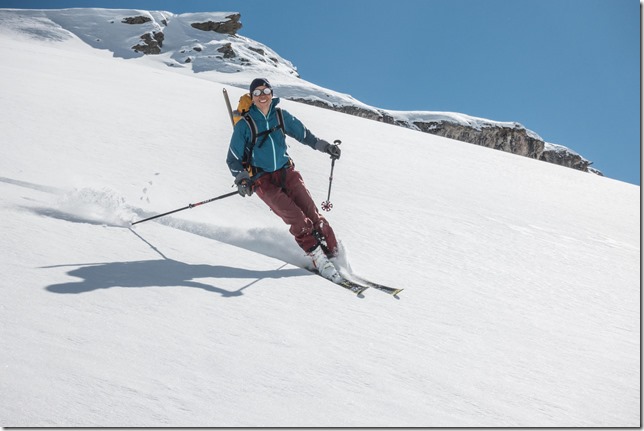 Above: Birgit and I headed down skiing untouched slopes with enough powder to grin about. 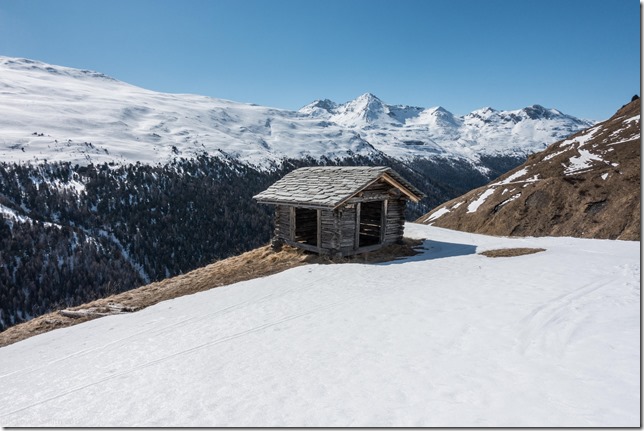 Above: We stopped at a little shack and sat in the sun for a bit.

One final descent down to the road and we returned in the sun to our accommodation along the cross country skiing track.

After having explored the North facing slopes yesterday we decided to try our luck on the South faces hoping that the snow would be a little softer and free of the dreaded crust. We drove up the road to Juf and headed up the slope to the left of the road. The snow was hard and icy as it was early morning and the sun wasn’t yet softening it up. We used ski crampons to help us up. The snowy slopes had large patches of grass or was it the grassy slopes had large patches of snow. Whichever it was spring was making itself known. 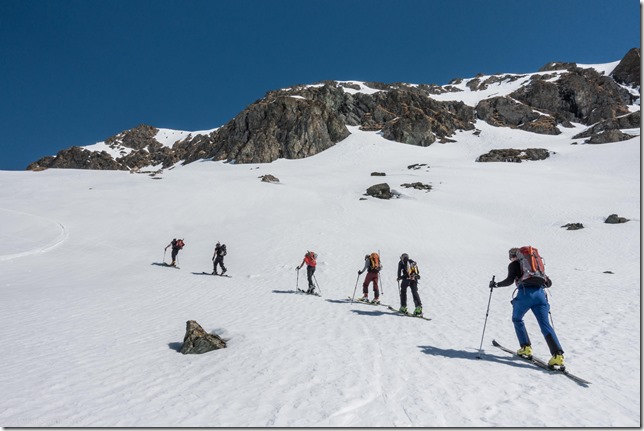 Above: We headed up on the other side of the valley for our second day tour.

We ascended until far up in the hills we made a ski depot on a flat patch. Some of the party chose to stay and Helga, Rolland, Elmar and I continued. We traversed across a steep slope and then climbed steeply up. The snow was soft enough that it didn’t feel too scary, however, it would have not been great to fall. We continued climbing over a rocky section with a few easy rock climbing moves. that were made harder by wearing ski touring boots. Then we continued up the ridge to the summit of Mazzaspitz (3164 m). 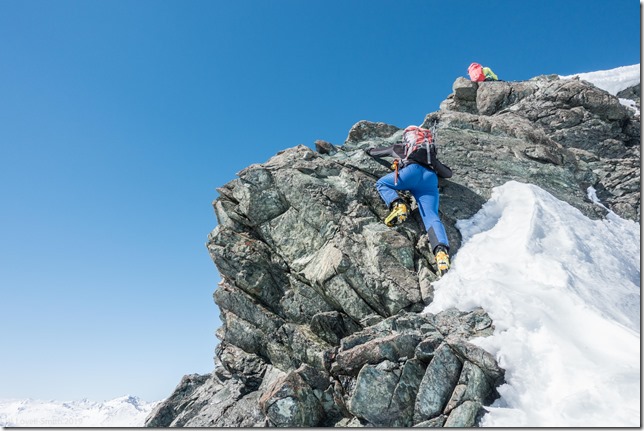 Above: There was a section which required some easy rock climbing. Ski boots aren’t great for climbing in. 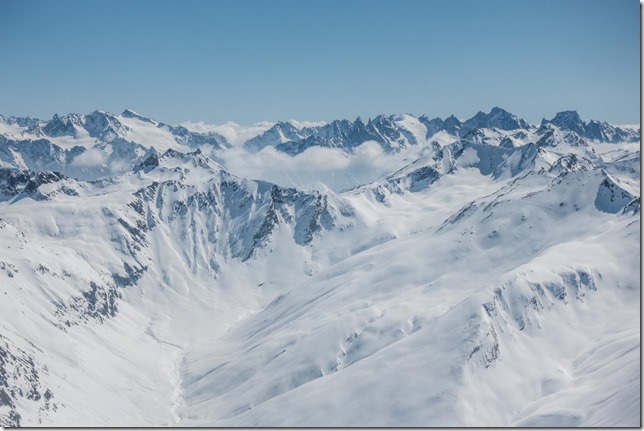 Above: The views from the summit of Mazzaspitz were amazing. In every direction were mountains covered in snow, a life time of ski touring.

It was another amazing spring day with unobstructed views in all directions. We retraced our route back carefully down-climbing the rocky section and then climbing back down the steep slope and over to where the others were waiting. We skied off the mountain and enjoyed nice conditions back to the road. The sun had softened the slopes that had required ski crampons earlier in the day.