I left Nelson at midday on Friday and drove down to Hanmer arriving there in time to cook dinner at a picnic table near the race registration. After picking up my race pack I followed the shingle road that lead up to Jack’s Pass, avoiding the many possums on the road stunned by the car’s headlights. I pitched my tent in the grass and heated up a MTR curry to add to my still warm rice.

I woke to the sound of vehicles and got up as the organisers set up the transition area. There was a heavy frost on my tent and it was a clear morning. The mist that had rolled in in the evening but had gone again in the night leaving a sky full of stars. I left my bike in the transition area and drove down to the start line at the bottom of the hill.

Some hours later the race started. I had decided to be pretty cautious as it was the first running race after rolling my ankle last year. It felt like half the field got away to begin with but then some people began to drop back after the initial excited sprint. We left the road and started up the single track. I took photos as we climbed and was pleased to see that once it got steeper I was faster than those around me.  I passed a bunch of people with another guy and we talked at times as we ran. Well, I say ran. “It’s more of an angry walk” my companion noted.

We continued the angry walk passing more people and I pulled away until I was alone. I reached the saddle and started heading along the ridge and up to the summit. The first runners were starting to come back down. My running buddy caught up and we made it to the summit. The descent down the ridge was ok but busy with runners still coming up. The route turned off at the saddle and headed down to Jack’s Pass. It became very steep for a while and I picked me way slowly down. It became more runnable and then less again and we were at the pass. 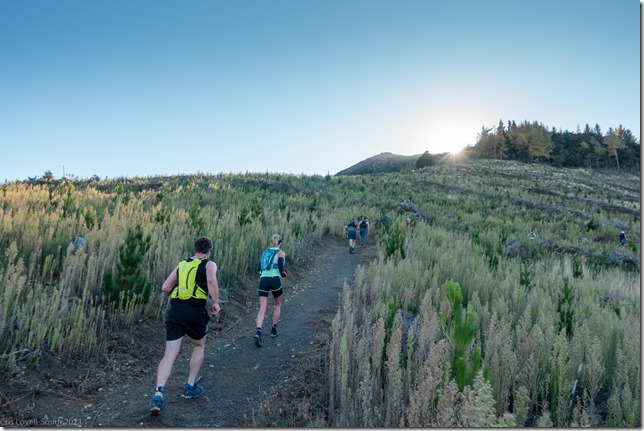 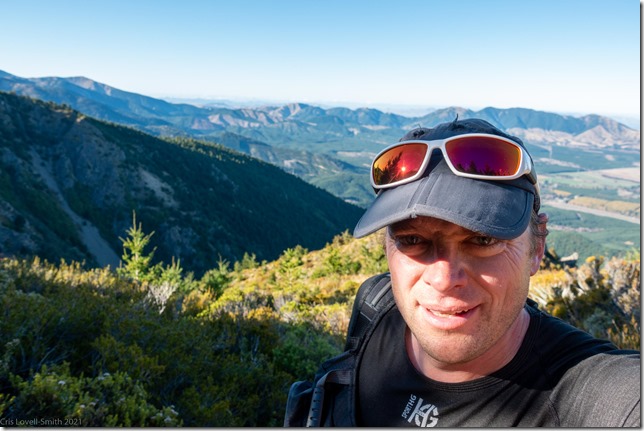 1) It was good weather for the Mt Isobel Challenge. It was a fresh clear morning. I took my camera with me like any dedicated athlete would do.

2) I took happy snaps on the way up the hill. 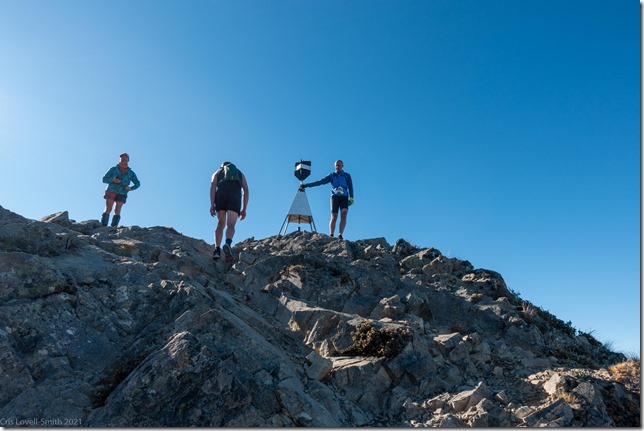 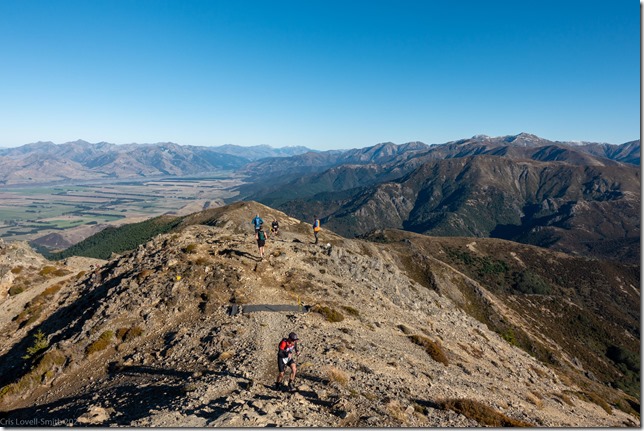 1) From the saddle we made a small detour up to the summit of Mt Isobel. 2) The route took us back down to the saddle and then down to Jack’s Pass. It was steep and technical down to the pass and I kept my camera in my bag. It was then into the bike ride again without photos. I did however stop to put my go pro onto my bike, such is my dedication.

I faffed around for a bit at the pass changing shoes and getting my bike computer going. The ride starts with a descent. I rolled down eating a banana as I went. Once finished I started to ride a little faster but then decided it would be a shame not to have a bit of video so stopped to attach my GoPro. A couple of groups of cyclists passed me but I passed some of them again. The route around the the gravel road to Jollie’s Pass was nice. The road follows the Clarence River although I kept my eyes on the gravel mostly. We turned right and headed up the road to Jollie’s Pass. I passed a few people who were slowing down on the hill and was passed by a speedy girl. I stayed more or less with her for the rest of the race although she made gains on the downhill. We finished climbing and descended down the very bumpy and rocky road. The organisers had painted arrows directing us around the worst of the ruts. I reflected that it would have been sensible to be wearing cycling gloves.

There were no calamities and I got to the sealed road at the bottom and accelerated thinking it would be a quick 4km TT to the finish. I’d forgotten the route though and we turned back onto gravel roads slowly ascending, crossing a much fuller than expected river and climbing, climbing. At one point it really became quite steep and I passed some people pushing their bikes up the hill. I got to the last downhill and descended on the gravel road to the finish line.

I finished in around 2.5 hours, which I guess was ok. It seems I’ve ridden the race three other times in the past, although I don’t remember riding it so many times. Apparently in 2004, 2005, and 2009. I can’t find the old results but it looks like it took me 2 hours 12 minutes in 2005 and around 2 hours 23 minutes in 2009. I remember one year the course was slightly different and we took a small single track for a little bit while ascending Jollie’s Pass. It’s hard to know whether to be happy with my time. I think it’s probably ok considering I never felt like I was pushing really really hard and it’s the first running race in a long time. I dug up a GPX file from 2009 and using Strava compared my 2009 and 2021 bike ride. I was actually faster this time. Interesting.

I remember cramping one year on the running descent but this time I felt fine with just the slight hint in my calf muscles when I first started to climb up Jollie’s Pass. Would I have got a better time if I’d pushed harder or just got tired? 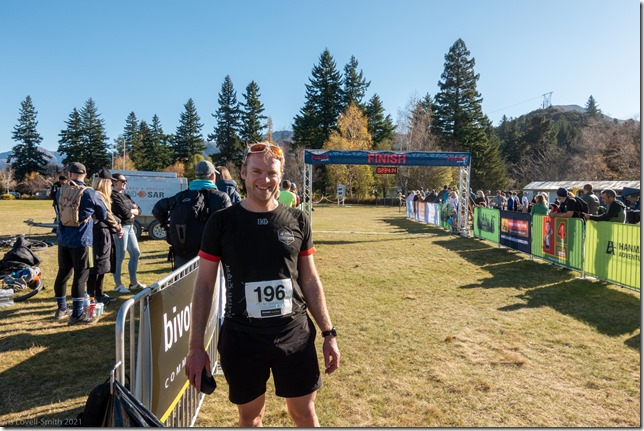 Above: I finished in 2:32:58 which didn’t seem too bad considering. 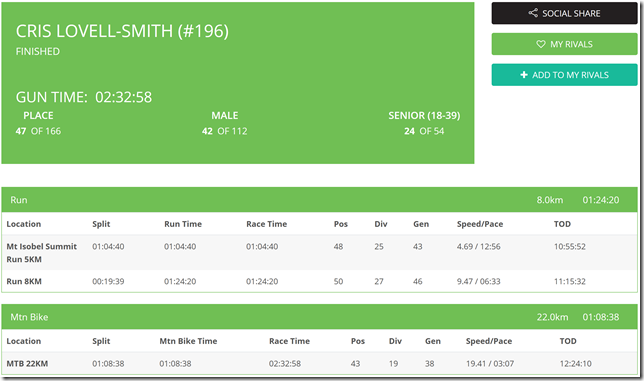 Matt, Brent and I drove to Duncan Bay in Tennyson Inlet. From there we ran to Nydia Bay through the beautiful green forest. It was a sunny winter’s day and the scenery was great. 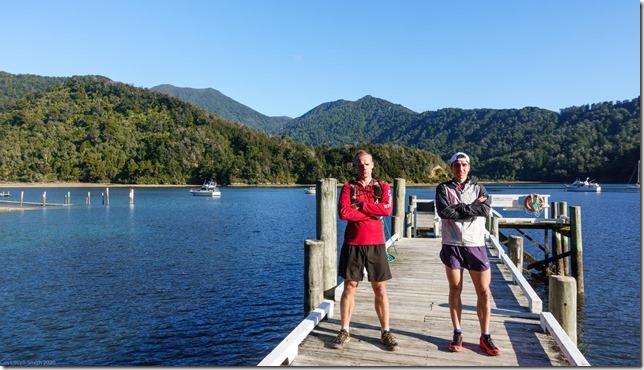 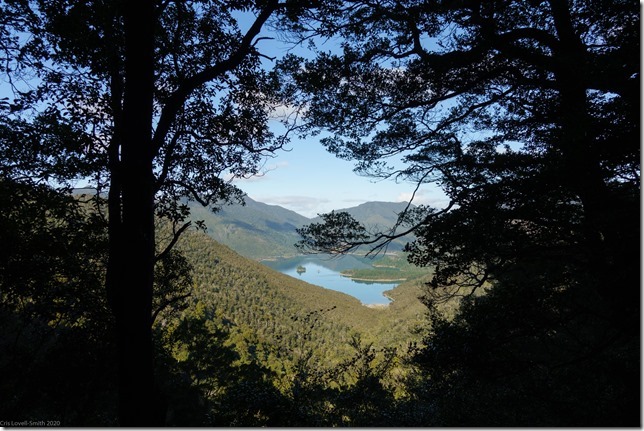 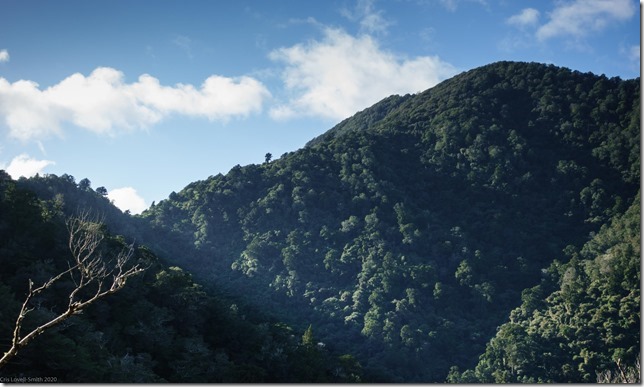 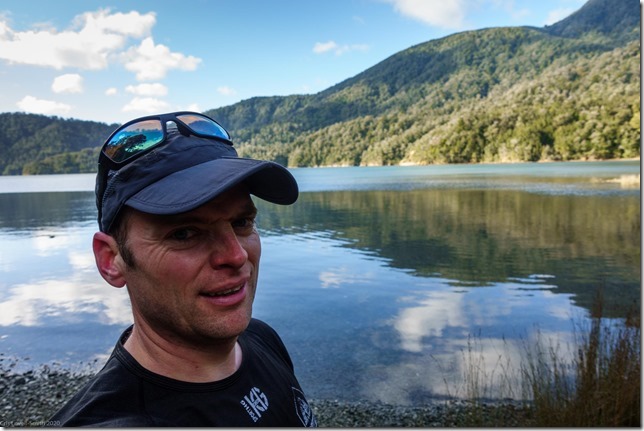 1) Matt, Brent, and I ran part of the Nydia Track. Here they are posing at the start of the track.

2) We ran down to Nydia Bay and then back to Duncan Bay where we started.

3) The scenery was really nice. 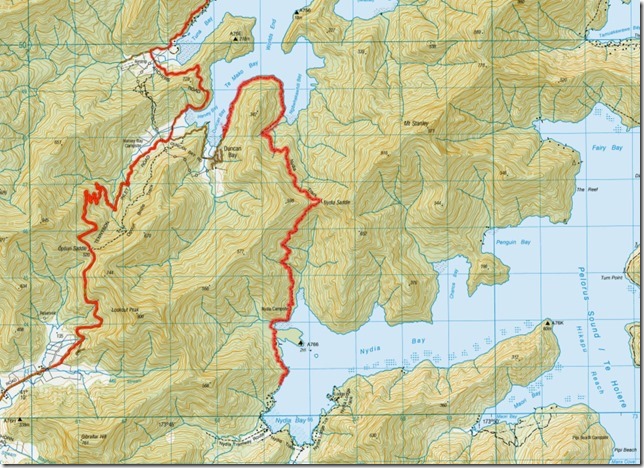 Above: Our route today + the edge of my bike ride earlier in the year to the left. We ran from Duncan Bay to Nydia Bay and back.

We piled into the evil wagon in the morning and drove out to the Hacket. The four of us jogged into Browning Hut. It was a fresh morning but the sun was coming out. Mat headed back to the car and Pat, Georgia and I continued. We climbed up through the bush and made our way slowly back through the hills to the flat in Brook St. It was an enjoyable jog with good company in nice weather.