Leonie and I spent another night at the Ossiacher See after the Tour de Kärnten. The following day we drove to Triglav National Park in Slovenia. On the way we stopped at our favourite castle Finkenstein for a post race snack. Camp Triglav was closed so we headed up the river to another campsite. It was sunny so we went cycling up the pass Vrsic.

The following day we packed our bags and went walking into the park. We followed the Soca river towards its source and then continued up into the hills towards Zavetišče pod Špičkom. It was steep going. Around 1800 m we encountered snow. There was more than last year when I ran up to the same hut.

I had forgotten my gaiters so tried to avoid the snow as much as possible crossing to patches of grass and rock whenever possible. It had rained while we were walking along the Soca and the snow was slushy and wet and with each step we would sink in to our knees. Occasionally when we strayed too close to rocks we would break through deeper revealing a big undercut where the snow had melted away.

The hut was a large metal box, not particularly pretty but it was cold and grey and any shelter was welcome. Only the winter room was open, a small windowless room with five old mattresses at the height of the door. It wasn’t quite up to the impressive winter room we stayed in last year over the other side of the park.

We put on our warm gear and boiled water for hot drinks. Then we prepared a mountain curry from ingredients we had found in the Villach Hofer yesterday while foraging for tasty treats. After dinner and more hot drinks the weather decided to close in culminating in a heavy downpour of a hail and rain. We scuttled around the hut and into the winter room.

The weather fined up in the night and it was sunny when we woke, then it was cloudy, then it was mostly sunny again. We went for a little stroll to a saddle and then came back. Leonie spotted three or four snakes in front of the hut in the patches of grass. Other than that we saw a weasel racing down across a patch of snow and a few Marmots.

We walked back down to the camp site stopping to visit the source of the Soca on the way. As we arrived at the camp site it started to rain but on the bright side Katha, Dom, Vero and family turned up. I hung out with them a bit in the evening.

The weather forecast for Monday was bad so we drove back to Lindau. 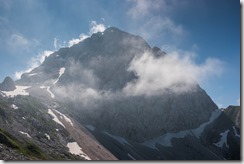 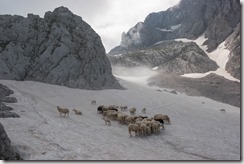 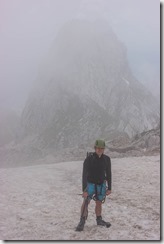