For the first time I tried out the long course. Markus and Leonie did too and Angela rode the middle distance.

Here’s how it went.

We turned up on Saturday afternoon after driving back from Cortina and met Markus and Angela at the Haldensee campsite. The weather forecast for Sunday promised sunny times so we were happy.

Sunday dawned but without the sunny times. Still it wasn’t raining so we were happy. The race started at 6 am. As usual we started a long way back in the field as we arrived a little late. I spent the first 15 minutes passing people and at some point Markus caught me up again. So did the rain. It began with just a little bit but soon it was “Arlberg Giro Feeling” or perhaps “Tour Transalp Stage 1 Feeling”. In fact it was very much like the Tour Transalp because the course also went through very similar areas and in some parts followed the same roads. The tour-feeling grew stronger as the intensity of the rain increased. 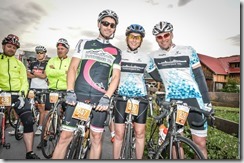 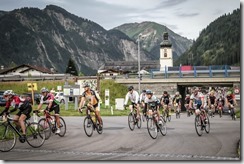 Above left: Markus, Leonie, and I had the crazy idea to enter the Tannheimer Tal long course. That’s 220km / 3500 m. It’s not something we train for. Above right: The race started dry.

The route went from Tannheim across the border to Germany and meandered around Allgäu. Then it headed up over Riedbergpass and back into Austria. By the time we got to the pass we had ridden 70 km or so and the rain had stopped. Markus stopped to clean his glasses and I continued alone. The route took us towards Hochtannberg Pass. By now the sun was shining.

I cruised up the pass conscious not to ride too hard. We had also been stopping at the majority of the refreshment stations to top up. I stopped at the next one in Warth just over the pass and Markus caught up again. I waited and we rode together down the valley collecting people along the way.

We ended up with a reasonably sized group for the ride down the Lechtal. At some point a van in front of us started motor-pacing us which I thought wasn’t so cool. We caught up to the next group only to find that they also had a car motor-pacing them! 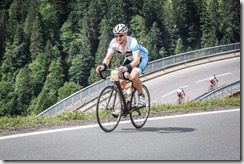 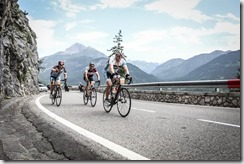 Above left: It soon started raining heavily while we were riding through Allgäu. Luckily it cleared a little after Riedberg Pass and as we started climbing the Hochtannberg Pass it was sunny. Above right: To my surprise my legs felt good ascending Gaichtpass and Markus and I cruised past many people. This is odd because usually by the time I get here on the 130 km course my legs are smashed. I suspect it’s because of the difference in speed. I race the 130 km harder.

We stopped again at the last feed station before the pass back into Tannheimer Tal and then started the climb. Our legs were surprisingly fresh still, in fact the whole race seemed much easier than I had imagined. We sat on someone’s wheel for the flat section to the finish and then did a nasty sprint past him to cross the line in about 7 hours and 57 minutes.

I was surprised how fast we were as I had expected to take much longer. I was also surprised how easy it felt. I was expecting to suffer a fair bit on the last part of the 220 km and 3500 m of climbing. Very strange, I felt much more destroyed after the 130 km version of the race in the past. Perhaps it was a mix of not riding too hard and stopping at most of the feed stations.

Leonie had a very good race coming in half an hour or so after us.

Angela did the 130 km and also had a good first race. 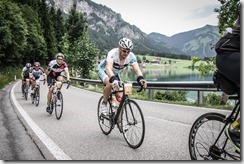 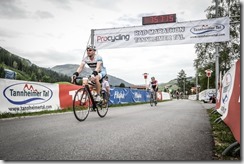 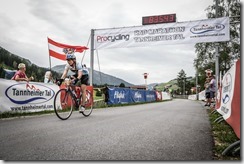 Above left: Markus didn’t seem at all tired! How irritating 🙂 Above middle: After being towed for the last 8 km by the third guy in this picture Markus and I allowed ourselves a finish sprint. Mmmm finish sprint. That’s one of the best parts of racing. Above right: Leonie had an excellent time coming in just under 40 minutes after us.

Above: This is what Strava thought. Interesting that the reported climbing is so different from what the organizers claim… Hmmm.

We crawled out of our tent and got ready. It was cold in the valley but once we crossed the river and climbed a little we reached the sun. It was a perfect weather day. Even more perfect than yesterday. We headed up to Galdhøpiggen, the highest peak in Norway (and not at all technical) with a large horde of other tourists. Most were very slow so we passed them.

The view from the summit was very nice. Steep cliffs and glaciers. We ate our Lom bread further down and arrived back down at the car park 6 hours after we started. After packing up our tent we had a delicious descent back down the gravel road to the main road. It was probably the most enjoyable riding of the whole trip. Lots of rolling, nice and warm, great scenery.

We rode back into town arriving after the bakery had closed but luckily one of the women closing the til out the front let us in and I came back out with two loaves of fruit and nut. Victory a second time.

We camped down by the lake in Lom in the evening and did battle with the mosquitos. 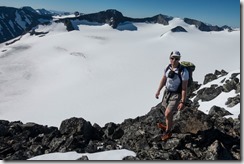 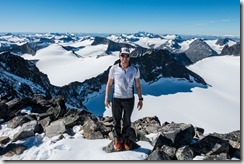 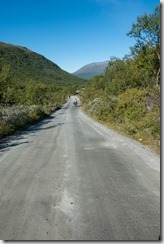 Above left: We headed up to Galdhøpiggen with the hordes of tourists doing the same. It took about 3 hours to the top at what was a fairly easy pace for us. Above middle: The views from the summit were nice. There is quite a drop from the summit to the glaciers below on one side. The route that we followed was not at all technical though. Above right: We headed back down to Lom from Spiterstulen after climbing Galdhøpiggen. The descent was nice. The gravel road was mostly smooth with a few potholes to make things a bit more interesting. 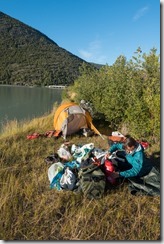 Above: We found a spot down by the river just outside of Lom to camp for the evening.

We hurried off to the bakery in the morning only to find that we had been foiled again. The fruit and nut bread would not be ready until after lunch. Oh dear. We went to the tourist information and re-planned the rest of our holiday around the bread. As you do.

We went for a walk for a couple of hours in the hills above Lom while the bakery baked. The weather was perfect, nice and warm, and not a cloud. The views of the surrounding hills were very nice.

We headed back to the bakery at 2 pm only to be told that the bread was now too warm to be sold. We gave up and bought an olive bread instead. As we were leaving I went in to reserve a loaf of fruit bread for tomorrow, but was surprised to find that they were now selling it. Norway mission accomplished!

We packed the bread and started riding up the valley in the sunshine on a quiet side road. We then turned onto the b55 and later headed up towards Spiterstulen. The plan was to spend the night there and do some walking the next day.

The road after leaving the b55 if gravel and ascends to about 1000 m. We took a break along the way and some nosey calves came to check us out. They took an unhealthy liking to our fruit bread and Leonie had to sacrifice some of our walnut bread to be able to lead them away while I frantically repacked.

We fluffed around looking for a camp site at the road end. There were a million other tourists and a little village of tents. We found a spot further down the river and cooked a curry and drank hot chocolate. Important things. 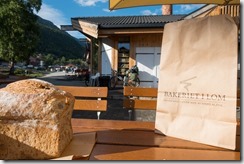 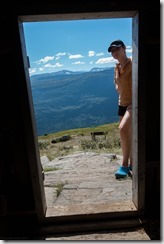 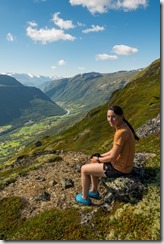 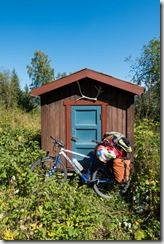 Above left: The views into the valley were nice. Above right: We hid our bikes around the back of this little shack before we went walking. 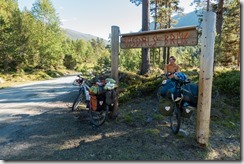 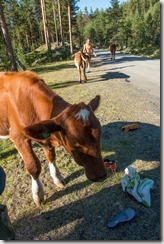 Above left: We took a break. Above right: Disaster! Three nosey calves tried to make off with our Lom fruit and nut bread and also showed unhealthy interest in my shoes and inner soles. 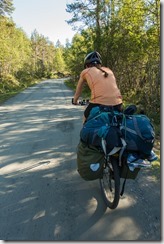 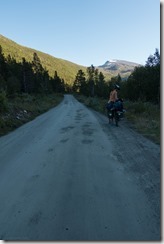 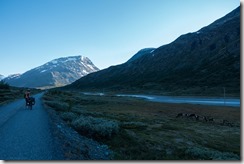 Above left: The road up to Spiterstulen was 18 km long and gravel but quite nice to ride. Above middle: It took us a while to cycle up to Spiterstulen and we arrived in the evening. Above right: There were a bunch of Rudolphs down by the river. 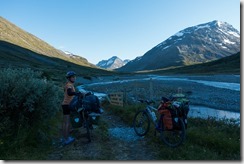 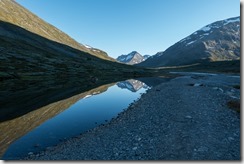 Above left: We spent quite some time fluffing around trying to find a place to camp. Above right: This is the view into the Jotunheimen National Park from Spiterstulen.