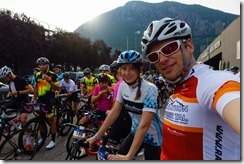 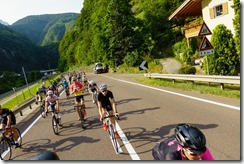 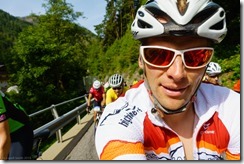 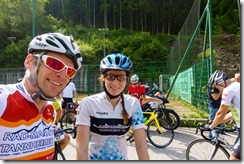 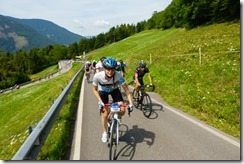 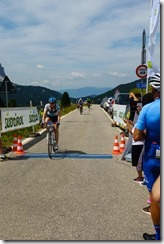 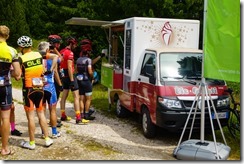 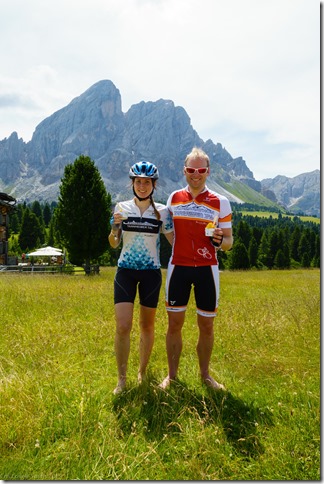 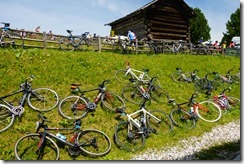 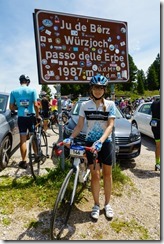 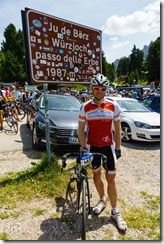 The day dawned with dubious looking weather. I went for my full lycra suit including feet warmers in preparation for a rainy ride. It was still dry when we left but not long into the ride it got a little damp. The first 8 km were neutralised, this time at a much more sensible pace.

The starting gun went off on a hill and the pace lifted immediately. I spent the next 20 minutes passing people and chasing with others. I ended up in a chase group behind a bigger bunch which we almost caught at the top of the major climb. Almost wasn’t quite enough though and I ended up riding with just two others for the majority of the rest of the ride after we descended slowly, first in mist, and then on the wet road to the valley.

My legs gave out on the final climb and I was passed by a good number of people. Nice stage despite the weather. Above: I rode for some time with the ‘red team’ after descending with them from the misty summit of the previous climb.

Above: Strava was watching again.

My alarm went off at 7 and I got ready for the second stage of the Tour de Kärnten. Today was an 87 km road race with 1000 m of climbing (or 1259 if you believe Strava). The first 13 km were neutralised although the “neutral” pace was at times over 50 km/h. As usual, I picked my favourite place in the bunch, i.e. at the back in prime dropping position. We reached the first hill and the bunch broke in three. I was in the back third and ended up riding with around 10 people to the finish line. The route was quite nice with good views of the green hills. The pace after we were dropped was very leisurely at first, but picked up again towards the end but the overall pace was still fairly low at around 35 km/h. The front bunch finished around 12 minutes up on us. My legs started cramping a bit as I tried to sprint over the last hill to the finish line. Best not too push too hard on day two I suppose. Nice race all-in-all. Above left: Stage 2 was an 87 km road race with around 1000 m of climbing. The weather was nice and warm and the scenery nice and green. I got dropped as the bunch split into three on the first hill at 30 km and rode with the third bunch to the finish. Above right: My legs did a bit of cramping on the last hill before the sprint which didn’t help my sprint but still I zoomed across the finish line with the bunch. There’s not much point sprinting for something like 50th place anyway.