Craig and I drove up the access road to the ski farm using the new chains I’d bought yesterday. It was sunny but there was a cold wind. We headed off taking the DoC route to the back of the snow farm. We then skinned along one of their tracks to the turn off to the Kirtle Burn Hut. We followed the four wheel drive track that was covered in deep powder snow towards the hut. The wind was strong and there were kites off in the distance with ski tourers attached skiing up and down the hills. We expected them to be staying a the hut but when we got there we found the hut empty. Kirtle Burn Hut is a small 6 bunk box of a hut. It’s not bad though and it’s set up for ski tourers with floor suitable for melted snow.

We decided against going out for a tour up to Mt Pisa and instead made hot drinks and read the available mags, which included “Women’s Day”. This didn’t bring much joy. We had enough gas to cook dinner and then it was time to sleep.

It was another clear day and very cold. We skinned up the hill in front of the hut for a few hundred metres. The snow was hard and icy in patches. As the wind was rising again we removed our skins and had quite a nice little run back down past the hut and into the valley. We skinned and skied back down to the snow farm tracks and then I skated back around to the DoC track. We drove back down the access road and then back to Christchurch. 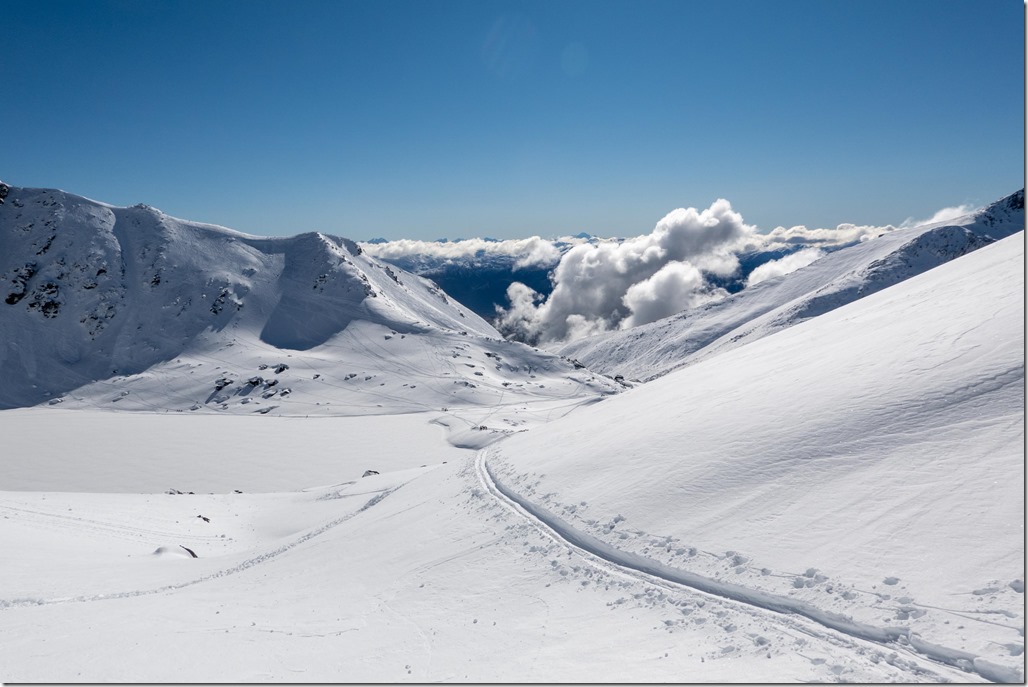 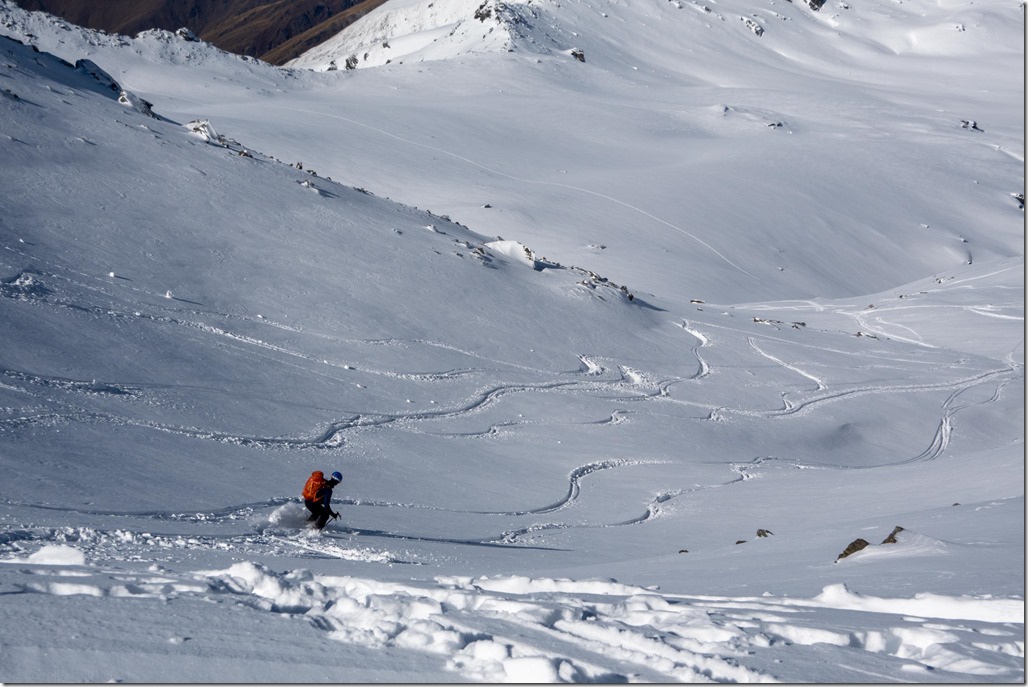 So after spending two nights at the CMC lodge in Mt Cook village we drove back North to Tekapo in the fresh snow that had come down very low and was coating the valley floor near Lake Pukaki. I hadn’t seen this much snow here… ever? We drove to the DoC access point near Mt Gerald station at the head of Lake Tekapo.
After parking in the little DoC area, we set off up the hill carrying our skis.
We’d left pretty late which wasn’t too surprising so only had a few hours to get to the hut before dark.

At some point we were high enough for there to be enough snow to use our skis.
We began skinning up the hill cursing the tussock and matagouri bushes sticking out from under the snow.
Finally we got high enough that we only had delicious snow. And what a lot of snow. There was ooodles of new powder. My skis kept getting lost under the white and it was an effort to create a skin track. We reached the saddle that we were aiming for as the sun was setting. There was a nice but cold view back across Lake Tekapo. 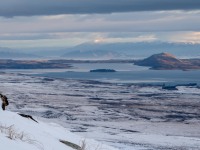 Off came our skins. Skiing down was difficult to begin with. The powder was so deep and the slope so gentle that we just flailed around making very little progress. Finally we got moving and had an uncoordinated descent, following what was probably a four-wheel-drive track in summer, and hitting a few submerged rocks on the way down.
The powder was deep but there was almost no base so it was easy to hit the rocks underneath. We crossed a river at the bottom. I opted to walk through it and Craig decided to take off his ski boots and walk through in bare feet to keep his boots dry. This was quite a process.

The adhesive on my skins was struggling to stick in the powder as we skinned up towards the hut and as we skinned down the small descent to the hut I lost one in the snow. It required a few minutes of digging up along the track but luckily I found it. It was dark by this point and we were searching with headlamps. 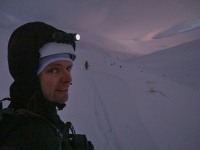 There was an older couple in the hut when we arrived and they already had the fire going. The hut was very old with just 6 bunks. It’s maintained by a trust and is kept going by donations.
We squeezed in and made cous cous for dinner, flavouring it with avocado, olives, sun-dried tomatoes and feta. Yum. The couple were long time ski tourers and had done many trips throughout NZ and Europe. We clambered into bed. Well I did as I was on a top bunk. The others fell asleep quickly but I couldn’t. Or perhaps I dozed but in any case rustling in the hut got my attention. I could spy mice running about and trying to get our food. I rescued the food bags and hung them up from the roof.

It was sunny and wind-still the following day, perfect for ski touring. We decided to take all of our gear with us rather than leaving it at the hut with the plan to do a day’s touring and then head out to the car. The snow was still good and we trudged back along the path towards the river until we could take a right and head up the ridge further into the mountains. The couple we’d stayed with in the hut were already out and we saw them skiing down towards us in the powder whooping.

We skinned up for a couple of hours stopping for a lunch break. It reminded me of Europe. There was proper snow. Not ice and bits of tussock. It was light and fluffy and it felt like we were high and alpine. We could see peaks off in the distance covered in snow. The weather was predicted to deteriorate and we could see the beginning of cloud coming in. Our skis took us further up the ridge. Not wanting to get caught in that flat light that can make descending so difficult, we dropped off and had an amazing powder descent down some way into the valley. The snow was perfect. The conditions were great. It’s funny how long you spend slogging up for just a few enjoyable turns. The descent probably only took a couple of minutes but it was worth it. 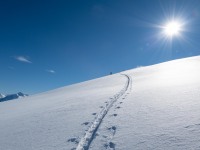 We’d decided to make the most of the great conditions and stay another night in the hut. The only thing which was making us unsure was a group of 10 people we could see in the distance so we skinned back in the direction of the hut, gaining height and had a chat to the group as they were coming back down. Nope, they were a guided group staying at Rex Simpson Hut so we’d surely have the little Camp Stream hut to ourselves.

We got back up to the ridge in now much flatter light and descended down the way we had skinned up. The first part was still nice but then the powder became much heavier. I caught rocks at least twice cutting deep grooves in the bottom of my skis. Back to New Zealand conditions.

We managed to pick our way back down without destroying our skis completely and skied along the track back to the hut. I was eager to have a cup of tea and sit down but as we turned up I was dismayed to see a group of four French guys who’d come in for the night. The hut only holds six and the couple were still there. No room for us. We had a quick chat and then began skinning back to the river. It was already 4pm so it seemed likely we’d be out in the dark. We reached the saddle in good time though and still had a bit of light for the first skiable part of the descent. It didn’t take long though before skiing wasn’t an option. The headlamps came out later and we continued in the dusk and then in the darkness to the car.

After a curry in Tekapo and much discussion with Gina about what we should do we drove to the Mt Dobson ski access road and camped the night there. We spent a nice day skiing on the field the following day.