Craig arrived by train on Saturday morning and we drove to Galtür in Austria. It was warm and sunny and our skis seemed a bit out of place. They seemed even more out of place when we discovered that the first 6 kms up the valley towards the hut were snow free. Still, we did find snow and arrived at the Jamtalhütte in time to dump our gear and go out for a mini ski tour above the hut. 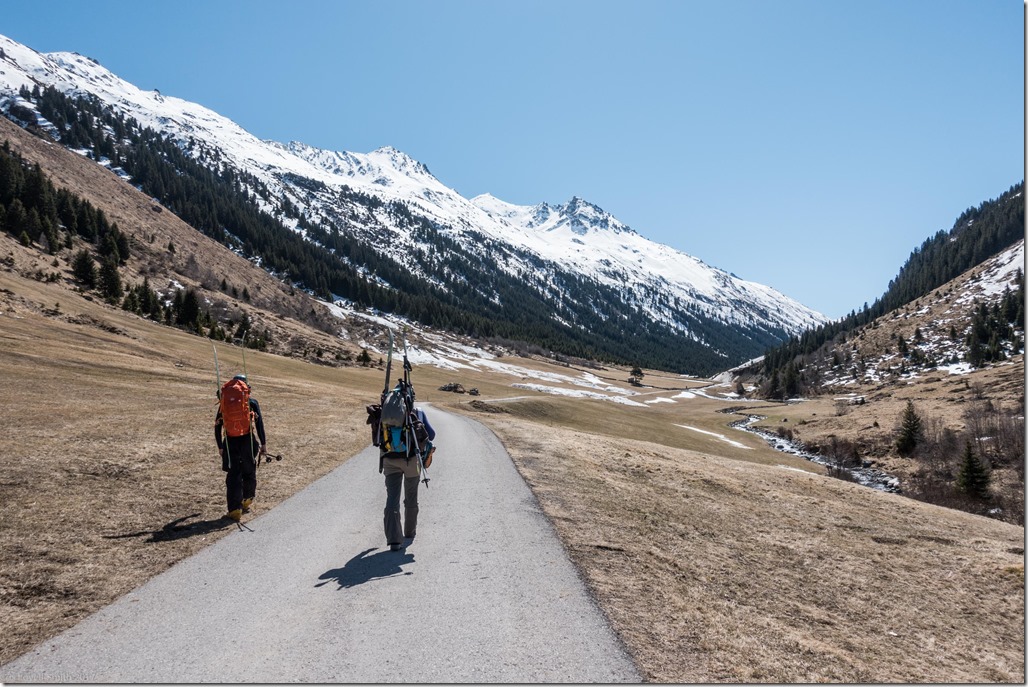 Above: We left Galtür in this sort of weather. Was this going to be a ski touring trip or a hike? 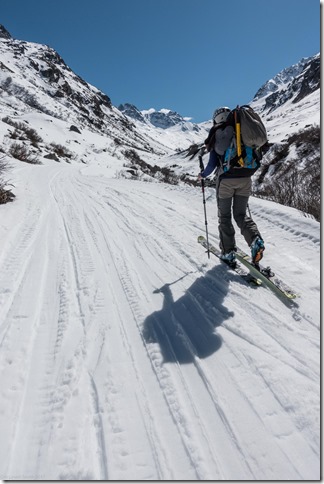 Above: Luckily the snow showed up allowing us to skin up to the Jamtalhütte.

On Sunday we skied East and ascended Grenzeckkopf before sidling over and ascending the Breite Krone. Both nice easy peaks. We randomly investigated a ridge leading up to the Krone but I wasn’t so keen to continue so we skied down the valley to the Heidelberger Hütte.

Craig and I went out for another evening ski tour. It was a clear night and the moon was intense. We skinned up a small slope. The snow was developing a crunchy crust. I was a little worried we were going to break something as we descended but we found our way back down and returned to the hut. 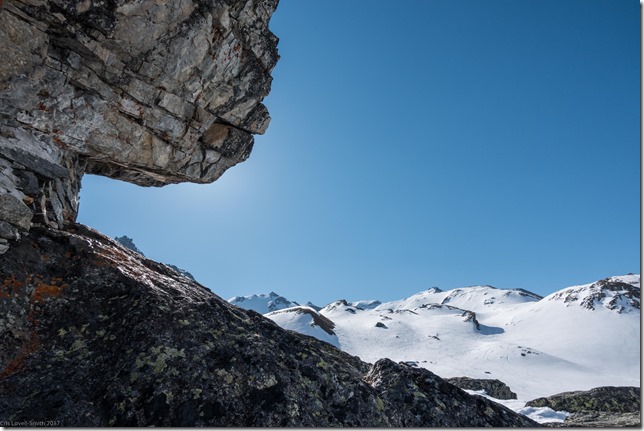 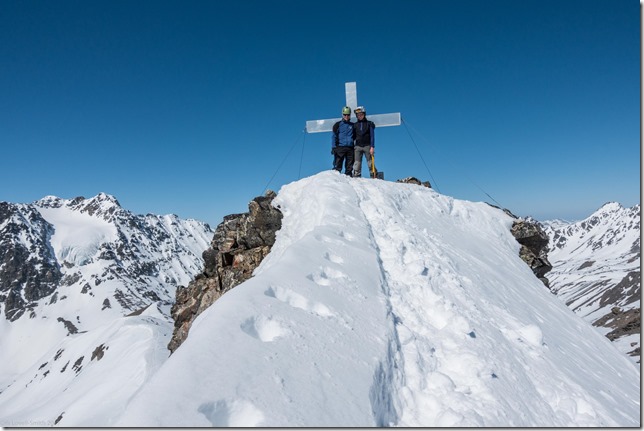 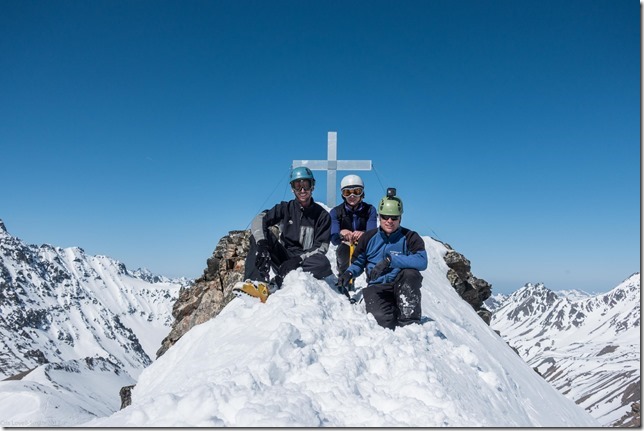 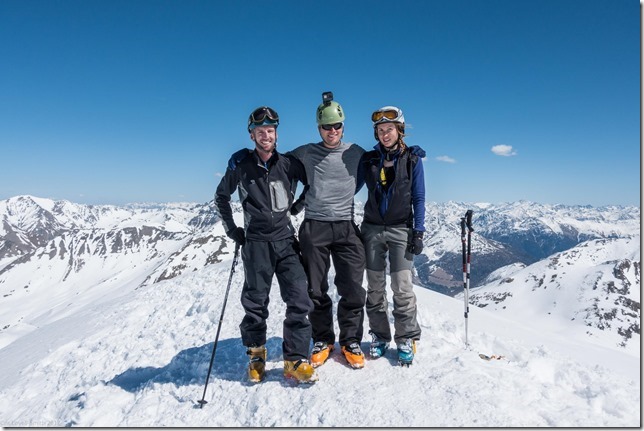 1) The weather on our second day was really good again.

2) Cris and Leonie on Grenzeckkopf.

3) We left the Jamtalhuette and skinned up to Grenzeckkopf. The summit sits on the border between Austria and Switzerand. Craig had fun sitting with one leg in each country.

4) We then skied across the border into Switzerland. We ascended the Breite Krone leaving our skis near the summit and going the last few metres on foot. 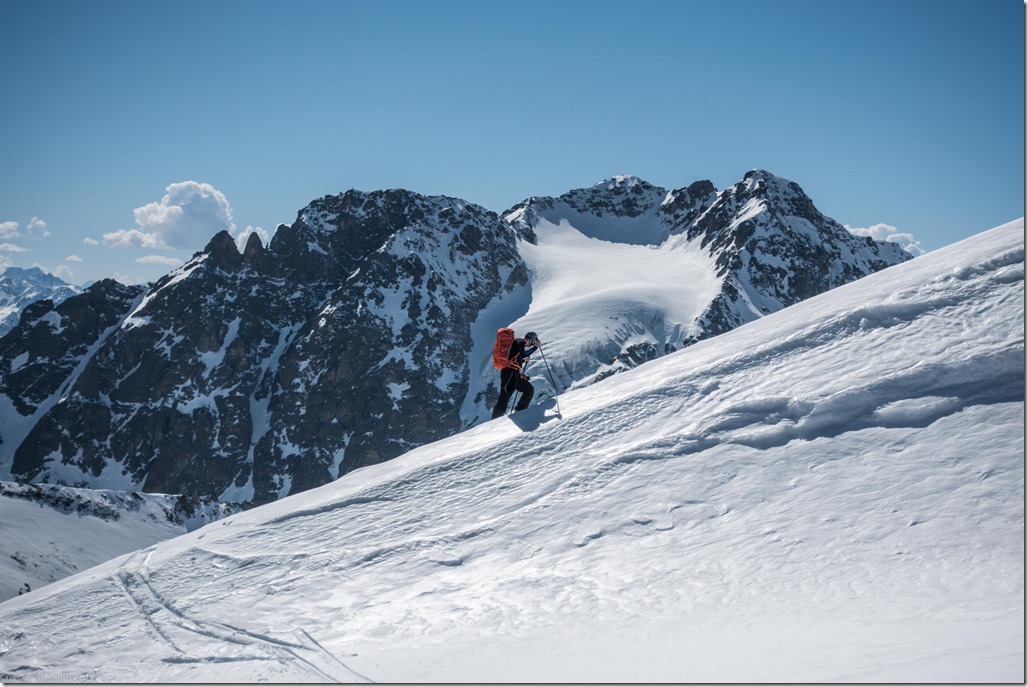 Above: Craig heading off to look for something challenging. 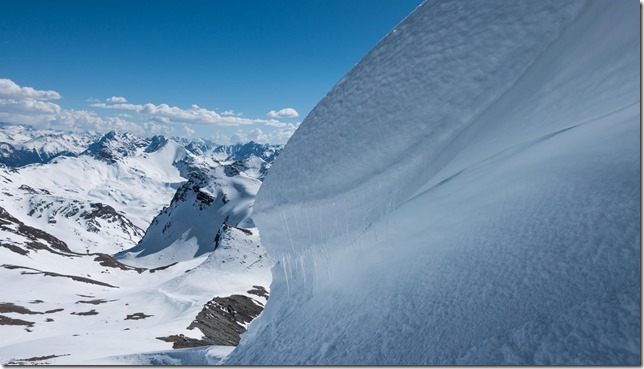 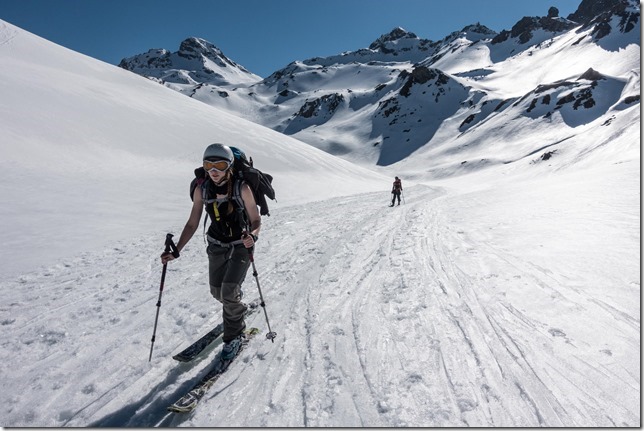 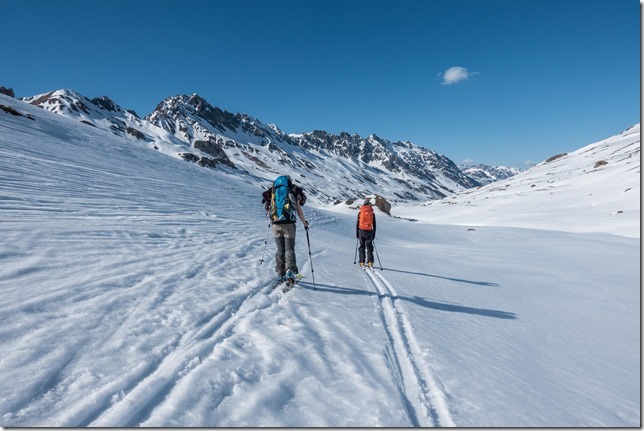 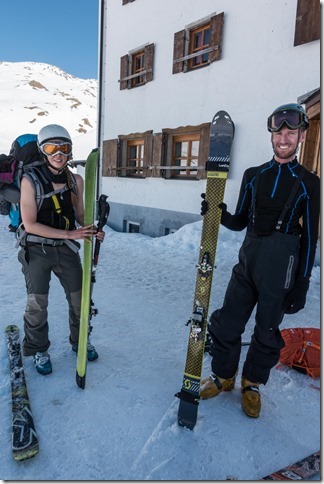 1) Craig was eager to find a more gnarly peak to climb. We headed up a ridge a wee way before I decided I was bailing.

2) In the afternoon we skiied down the steeper parts and into the basin of the valley. We then skied down to the Heidelberger Hütte.

4) We arrived at the Heidelberger Hütte. I remember the hut being fairly pleasant with friendly staff. This was our second attempt to come here. We had tried a couple(?) of years earlier but had to cancel due to avalanche conditions. 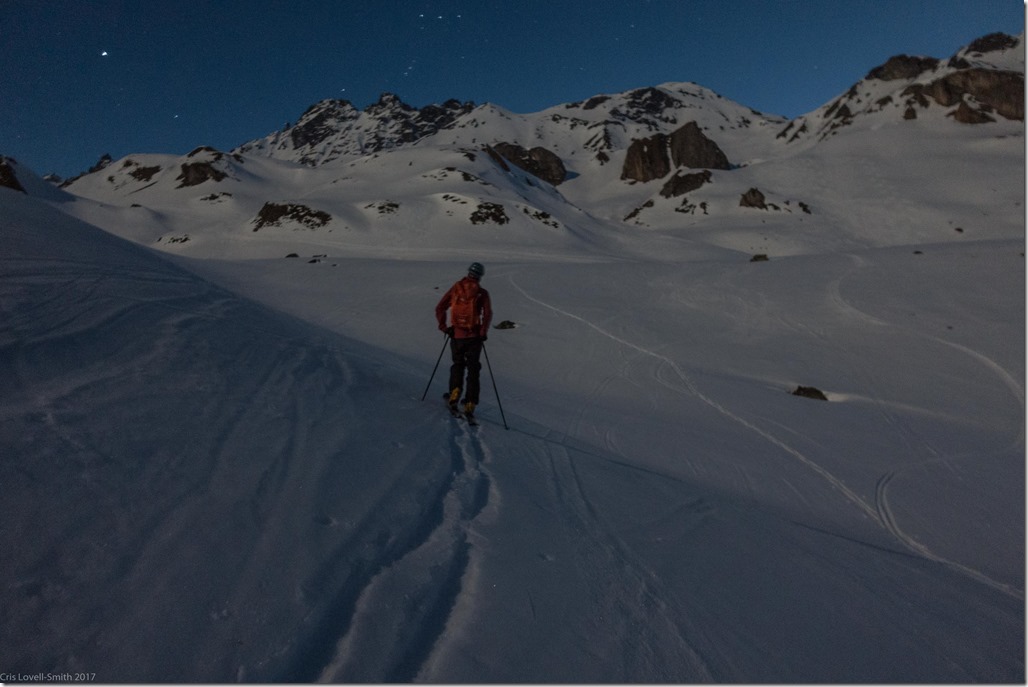 Above: In the evening Craig and I decided to head out again for a small evening tour. The night was clear and the moon bright. We headed up a small climb. I remember it getting steeper and steeper and feeling worried that we were going to slide down the mountain in the darkness. I think we had torches but I guess they weren’t that bright. It was three years ago so it’s a little difficult to remember! 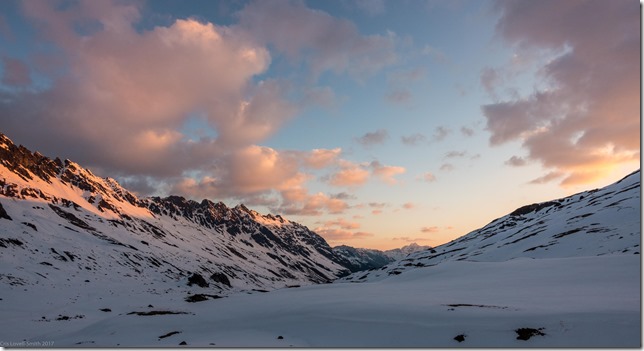 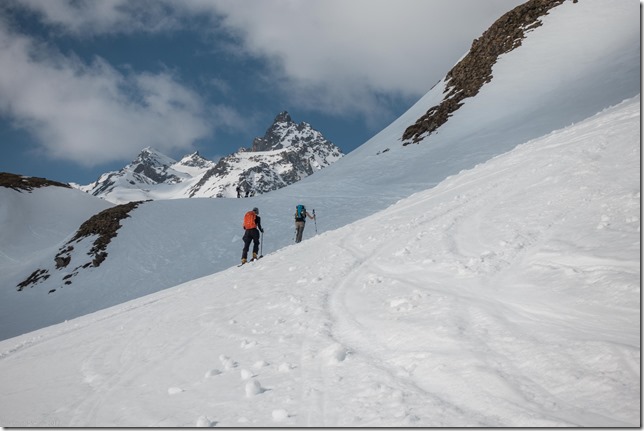 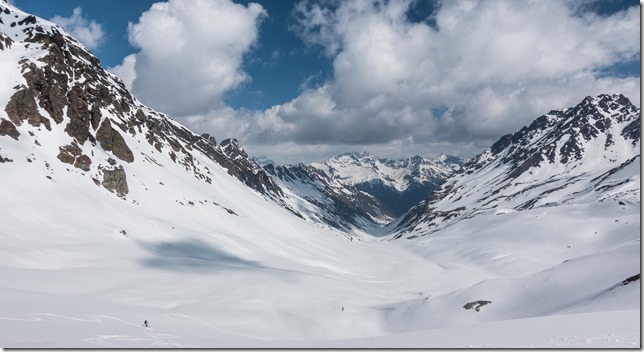 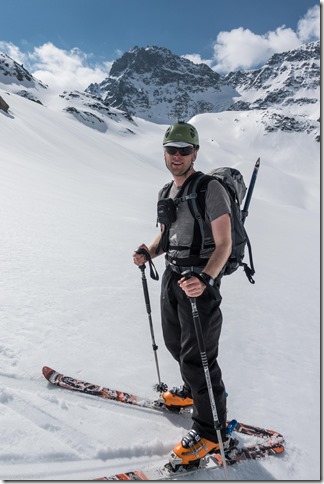 1) Sunrise at the Heidelberger Hütte.

2) We set off for a day trip from the hut. We sidled around the hills and up steep slopes arriving at the Lareinfernerjoch. Craig helped Leonie on the last part of the steep ascent. The snow was soft and it was easy to slip out of the tracks.

3) The descent from Lareinfernerjoch was very nice. It wasn’t particularly steep but still really nice. 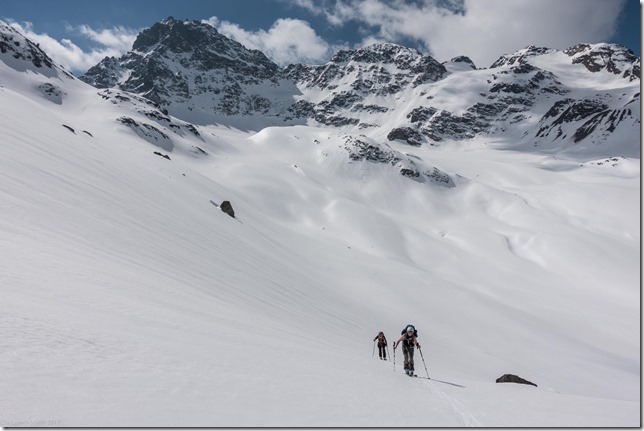 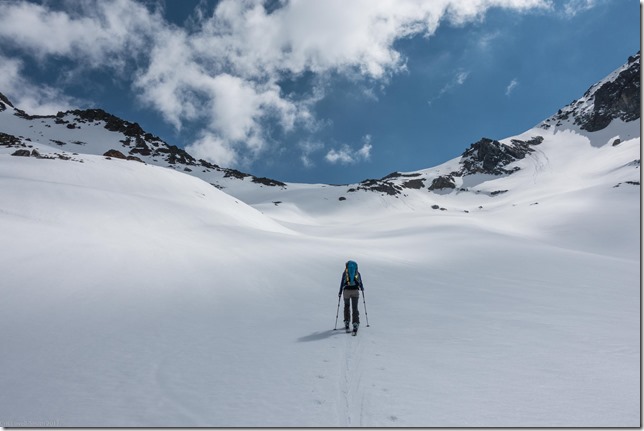 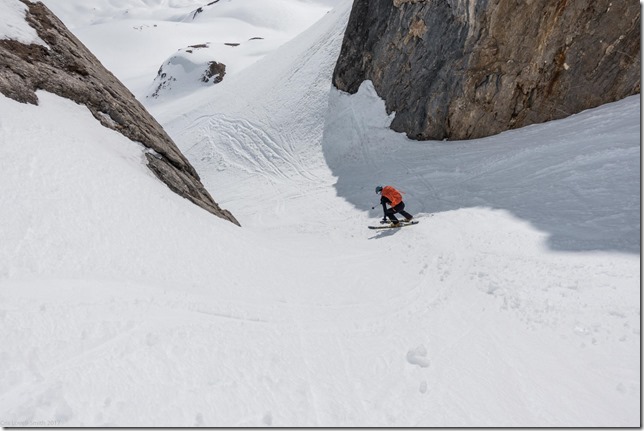 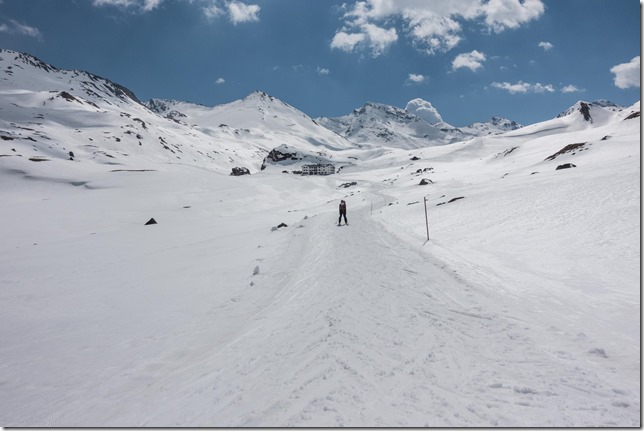 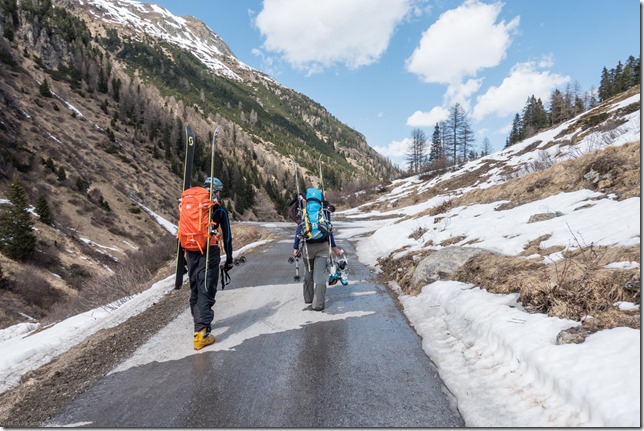 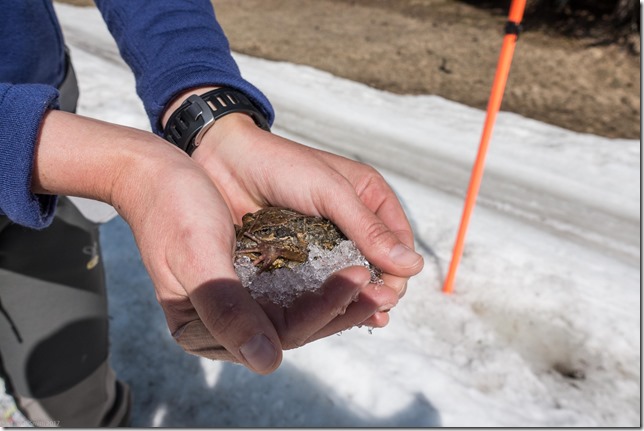 1) We ascended up to the Heidelberger Scharte.

2) Leonie skinning up to the Heidelberger Scharte.

3) The descent back down to the hut was also very nice.

4) We left the hut in the early afternoon after our morning loop. We skied down the track stopping to have lunch on the way.

5) The ski track ended in spring time and we carried our gear a few hundred metres before re-joining the ski field below. We skied down suddenly amongst crowds of people. The descent was long.

6) Part of the ski piste was covered with frogs trying to leave their pond and seek greener pastures.