Today was a 100x better than yesterday. We headed off neutralised towards Feldkirchen. Not long after a left turn away from Feldkirchen the start gun went and we approached the first climb for the day. My legs felt pretty good and I passed many people before the climb and then at least 50 during the climb. It was a little difficult to get past some people as I was barricaded in at points but after the 15 minutes or so of climbing I was chasing a good bunch with two others. We descended for a good while at a reasonable pace until at some point we had a left turn that lead into a steep climb. I managed to move back to the front of the bunch and kept up with the first riders while others dropped back. The climb continued for quite some time though and I couldn’t keep up with the front of the bunch near the top and dropped back a little.

We had a fast descent. I took one corner a little bit fast but recovered with just a little bit of brake locking. I rode with two other guys at the bottom of the descent and we caught up to the guys in front. We climbed for the next 15 km or so. I grabbed a banana that was held out to me as we rode past the drinks station and then we had a short sharp ascent. I remember dying horribly on this ascent last year but this time I only died partially. I almost slipped off the back but managed to cling on and got to the top at the back with a few others. Another fast descent and then I worked with three other guys to begin with, rotating constantly and racing along the flat. I didn’t die horribly in the small ascent in the “enge Gurk” as apposed to last year(?) and kept up during the speedy descent that followed. One guy attacked on the descent and I followed with another but after some terrifying corners I dropped back a bit. It was ok as the group reformed.

We entered Feldkirchen shortly afterwards. I tried to keep on a wheel and do as little work as possible for the last sprint. They had closed the roads for the last couple of km which was very nice. I didn’t quite hit the sprint right and was too far back and had to follow in across the finish line. The sprint is up hill to the finish line over cobble stones which is exciting.

A nice stage in nice weather with a good group. It was really much better than yesterday and felt like a race. Definitely good fun. It’s a pity though that your position at the start seems to have such a large influence on your position at the end. I think I wouldn’t have placed nearly so well in the Tannheimer Tal middle course in 2014 if I hadn’t lifted my bike over the barrier at the start into the second row. And today if I had been with people who rode the first ascent at the same speed as I did then I’d have ended in a better bunch and if my legs hadn’t died then I’d have had a much better result. If you start at the back you have no chance to catch up because all the people who climb at the speed are doing exactly that, climbing at the same speed. Anyway, still a nice stage. 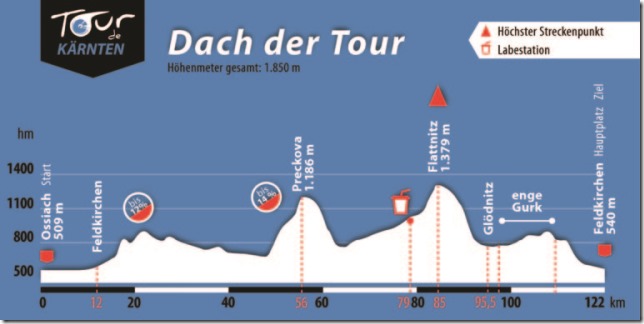 Above: The profile for the third stage.

Above: One of the less terrifying descents. I didn’t think to switch my Go Pro on for the terrifying bits as I wasn’t expecting them…

Above: The finish “sprint”. Not really a sprint as I timed it a bit poorly…