I caught the train to Vandans in the morning arriving about 11 am. From there I jogged/walked into the hills towards the Lindauer Hütte. The plan was to do get some exercise but at the same time do a klettersteig. The via ferrata in question was the  Gauerblickhöhle klettersteig. The topo looked very funky showing the route going through a mountain so I was keen to try it out. Instead of going all the way to the Lindauer Hütte I left the path earlier and headed directly towards the klettersteig. It began to climb, in parts steeply, until I reached a junction and could see the start of the route ahead. I put my harness, helmet, and headlamp on where the fixed cable began. There was still some snow built up on the side of the mountain and I had a great view down towards the hut and out to the Drei Türme and the Drusenfluh. I began climbing. Nothing too difficult. I reached the large entrance to the tunnel after not long. It was cold inside, 8 degrees according to a thermometer hanging on the rocky wall. It was also pitch black so with head lamp on I started through the cavern. The route went up for maybe 20 m and then descended perhaps 50 m before emerging back into the sunshine. From there the fixed rope continued steeply up for another 15 minutes, perhaps, and then it over.

I stopped for lunch and looked over towards the mountain “Sulzfluh”. It was an easy walk up to the summit but I decided not to ascend it and instead headed another way. I ran over a large rocky plateau of lime stone with big sink holes towards the Tilisunahütte. There I had a drink before heading back via Schwarzhornsattel arriving back at the Latschau Stausee some hours later. I checked the train timetable and realised I’d have to run fast. I managed to get back down to Vandans just in time and caught the train back to Lindau.

The whole trip took around 8 hours and was about 30km long. 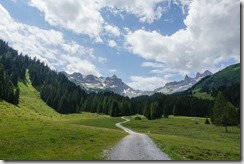 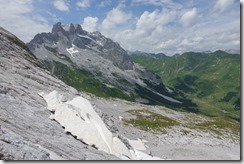 Above left: I caught the train to Vadans and set off into the hills at a jog/walk. Above right: There was still some snow at the start of the route. 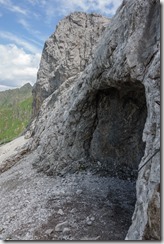 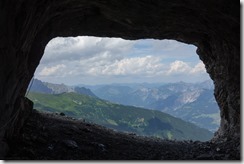 Above left: The route has an interesting tunnel that is perhaps a couple of hundred metres long. Above right: There is no climbing within the tunnel but there is still a rope to follow. 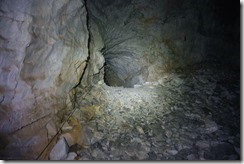 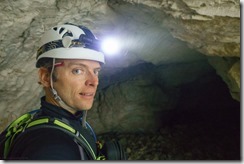 Above left: Rope in the tunnel. Above right: I had my trusty head lamp to see the way. 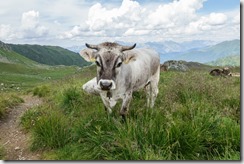 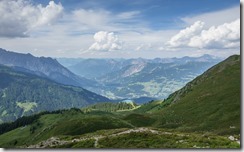 Above left: An Austrian cow. My my. Above right: I ran to the Tilisunahütte and then back down into the valley to Vandans where I caught the train back to Lindau.