The best day on tour so far. More amazing weather. We headed up the valley again from the hut. Once again the weather was perfect. We took a right instead of following yesterday’s route to the Wechnerscharte. This lead us up a steep slope to the Hintere Karlesspitze. The snow was beginning to get a bit slushy as the slope was facing directly into the sun. We executed standing turns, zig-zagging up the slope. Sliding out of the ski track would have been not a good idea and would have resulted in a long slide back down the slope, probably not too dangerous but not that pleasant all the same. We reached the ridge leading up towards the summit. It was really quite steep here and a slide down the East facing slope would not have been good so I took my skis off and carried them to the flat part below the summit. We walked the few metres up to the summit and then after everyone had assembled we all headed down the ridge and then dropped into the Wörgetal valley. Johannes D wanted to ski a more demanding line and the rest of us had a delicious powder run down fairly gentle slopes into a large basin.

We put our skins back on and tracked up to the ridge below the Wörgegratspitze. Johannes D and I went for a walk along the ridge a bit in the snow while we waited for the others to arrive. After a bite to eat we descended down amazing powdery slopes down to the main valley far below. We finished with a great traverse through forest ending by the road. From there it was a short skin back up to the hut for a well earned rest. 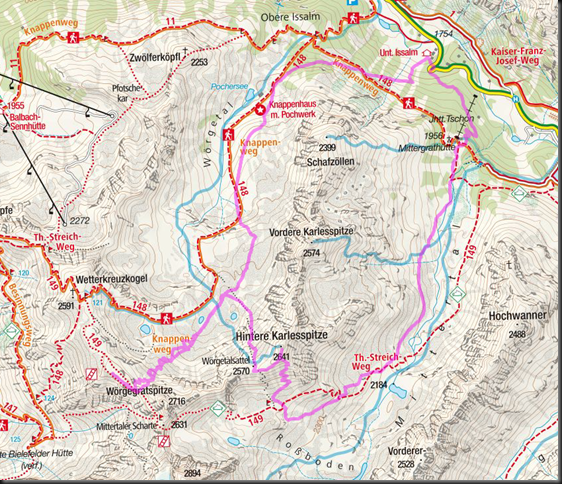 Above: Our track for day 3.

We headed up the valley from the hut. The weather was amazing again. Craig was feeling ill so turned around and the rest of us continued up to the Wechnerscharte. The last 20 vertical metres or so were a bit tricky as a lot of the powder had been graded off the mountain making it a bit tricky to ascend with skis. Instead we strapped them to our packs and walked up to the saddle. We ate lunch there in the sun before romping back down the mountain in glorious powder. 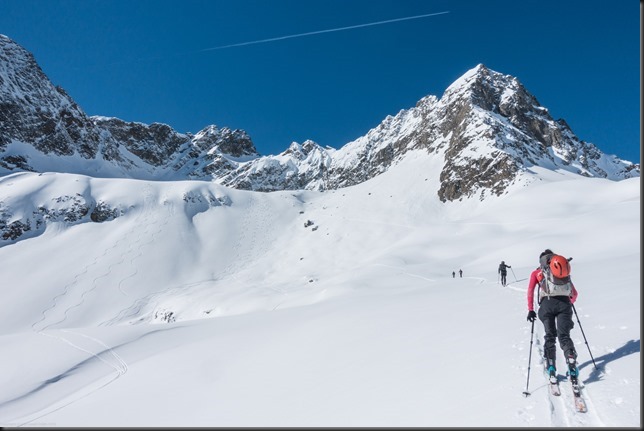 Above: The tour up to the Wechnerscharte was mostly over gentle slopes until the last ascent (not visible in this photo). 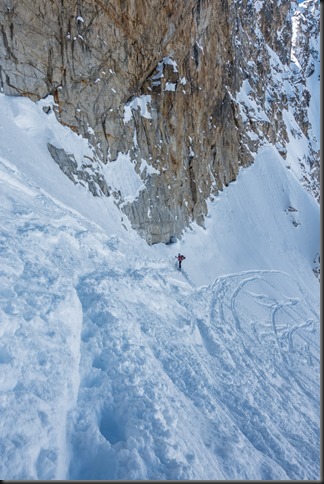 Above: The last 20 vertical metres or so to the saddle were a little tricky. We took off our skis and carried them. 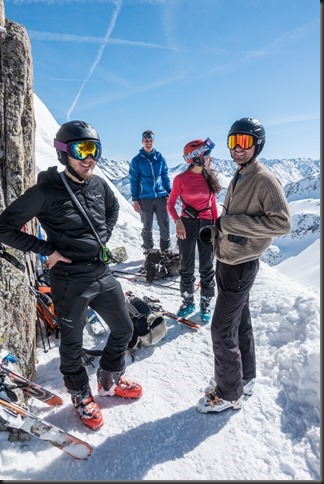 Above: We ate lunch at the saddle and enjoyed the warm sun. 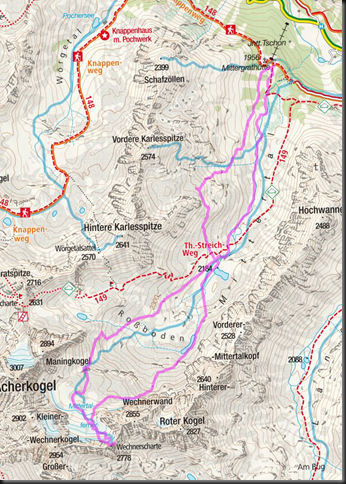 Above: Our tour up to the Wechnerscharte.

We spent a few hours at the hut and then went out again in the afternoon for another short tour across the valley. 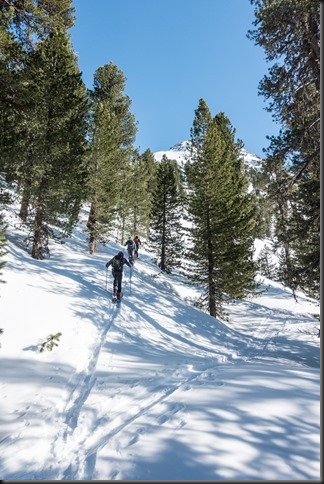 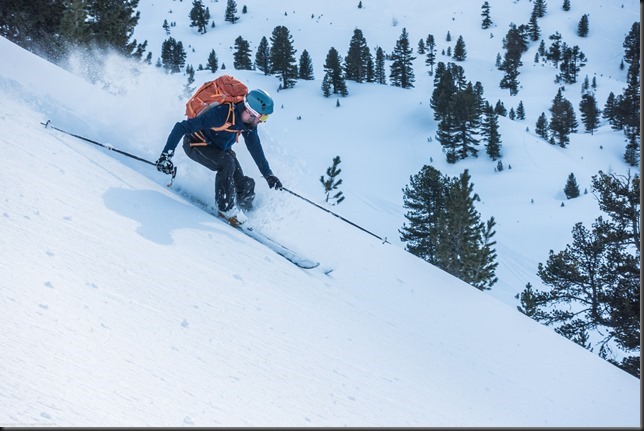 Above: We had another nice powder descent until we hit the slopes that had been facing directly into the sun during the day.

Craig, Johannes R, Johannes D and I drove to Öztal in the morning and collected Brendan. We then headed up to Kühtai. Rachel had train issues but Johannes D went back down to collect her while the rest of us sent all our copious amounts of gear and food up to the Mittergrathütte using the lift. We had booked a few days in the smallest of the three Mittergrat huts. The huts are usually completely booked out but it seems a group cancelled and I stumbled across the web site at the right time. We toured up from the car park the 100 vertical metres or so to the huts. Our little one was very funky. It was well kept, with a fire, kitchen, shower(!), mattresses upstairs. The huts aren’t staffed like some alpine huts. We would cook ourselves, which I quite like. The whole idea seemed much nicer than being packed in at the Jamtalhütte with its grumpy staff.

I headed back down through the forest to the car park and met Rachel and Johannes D there. Then it was back up to the hut and not long afterwards we were ready for our first tour. We set off early afternoon for a quick tour up Schafzöllen not far from the hut. The snow was a bit mixed but improved as we climbed. From the top we had a great powder run down to about half way. At this point Johannes D and I left the others to return to the hut and we toured up to the Vordere Karlesspitze. We had another great descent. The first section down from the summit had spring conditions and then we had more delicious powder. We traversed back around the side of the mountain so as not to have to ascend again to the hut.

The huts are nicely located in a sparse forest with a view into Kühtai and a view up the valley. We made use of the remaining sun on our return. 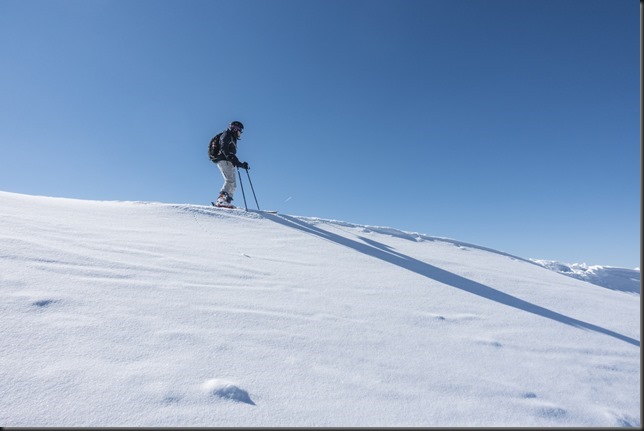 Above: We had a nice powdery descent from Schafzöllen. 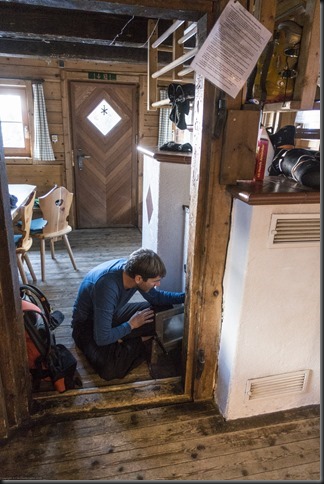 Above: The hut was very nice. It was small but had everything you might need including shower and dishwasher! 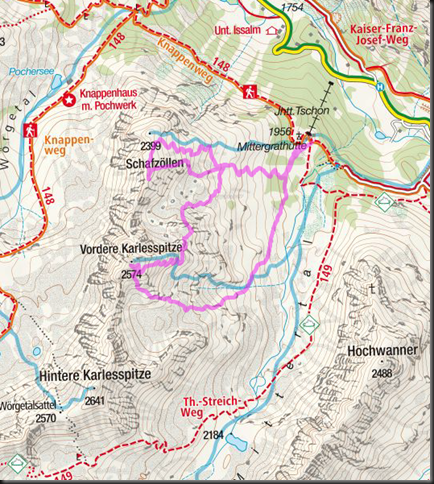 Above: A map of our two tours for the afternoon.