Markus and I drove off to Switzerland and parked in Netstal near the start of the Indianer Klettersteig. It was a sunny day and the plan was to do some cycling. We headed off up the valley and ascended to Klausenpass. Then we had a long descent, punctuated by some expensive Swiss food at a restaurant, to the Vierwaldstaettersee.

The lake was very blue and full of wind surfers. We rode along the side of it on a very funky little bike path that had tunnels and views back down the lake to mountain still sporting snow. The funky bike path degenerated into a far less funky busy road that we left just before Schwyz. After a bit of unnecessary up and down we joined the main road again and headed onwards to a little town before our second pass.

It was meltingly hot and so we stopped for ice cream at a cafe before beginning the ascent. The pass road was very steep and we sweated our way slowly up. We were still on the pass late in the evening and reached the car at dusk.

I nice but quite long day out. 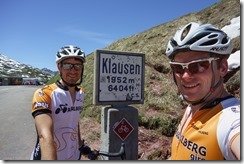 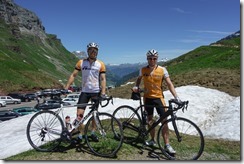 Above left: We headed out for a longish bike ride in preparation for the Tour Transalp. We had planned to ride a couple of days of the tour and wanted to do some training beforehand. The plan was to do 3000 m of climbing. Klausen pass was our first climb. Above right: Us at the top of Klausenpass. 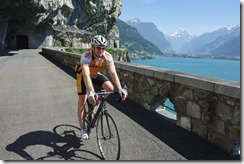 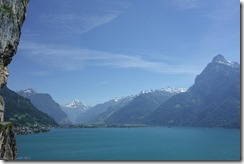 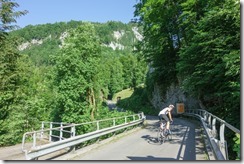 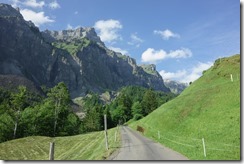 Above left: We climbed up to Pragelpass in the evening. Above right: The ascent was up a narrow road to the pass. It was nice as it was scenic and there was no traffic. 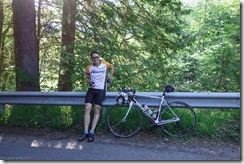 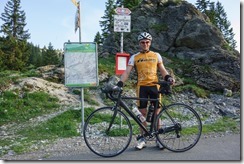 Above left: We took another break as our legs were getting tired. Above right: We arrived at the pass quite late in the evening.

Above: The ride with Markus.