Leonie, Jörg, and I did the Karhorn Klettersteig near Warth. Leonie found it much easier than she had in 2013 and completed not only the main route to the summit but also the harder west-ridge. The weather was good and aside from a bit of a traffic jam on the route it was good fun. 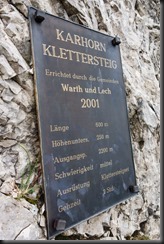 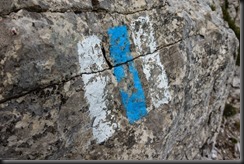 Above left: Leonie, Joerg, and I headed to Warth to do the Karhorn klettersteig. Above right: I took random photos. 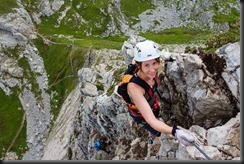 Above: Leonie found it much easier than in 2013 where we turned around soon after the start. 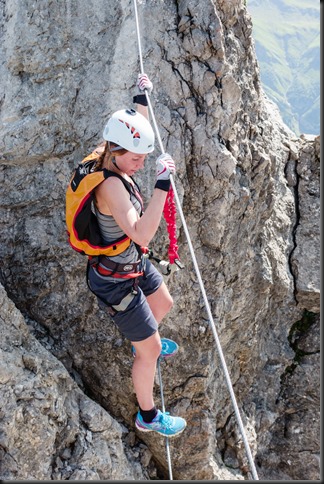 Above: A funky rope bridge. 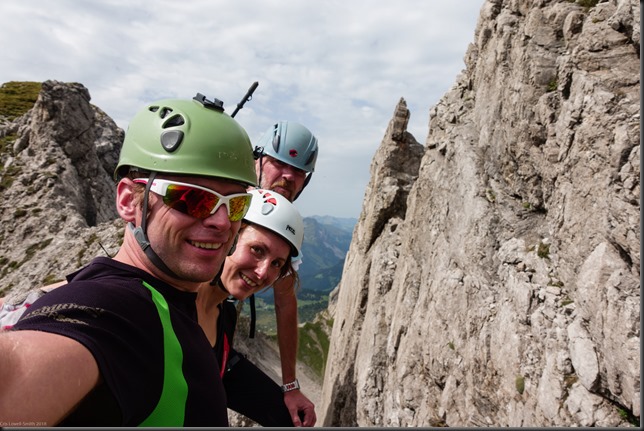 Above: We completed the main route and the harder west ridge.

Katerina, Daniele, and I headed off to Brandnertal early in the morning. We took the lift up to the Douglashütte. From there we walked around the side of the hill and down to the beginning of the Saulakopf Klettersteig. It’s a nice route that leads up to the summit of Saulakopf. Brendan and I tried it out a few years ago. There’s a D section near the start but it doesn’t get harder than this. We ascended to the summit in the sunshine before heading back down to the Douglashütte for some refreshments. 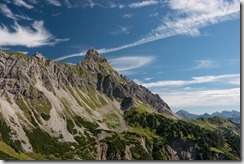 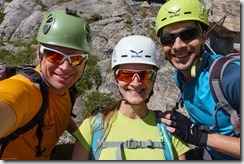 Above left: We had a good view over to Zimba. Above right: Nothing beats posy pictures. Daniele, Katerina and I did the Saulakopf via ferrata. 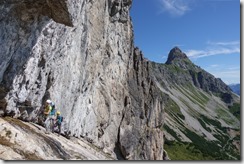 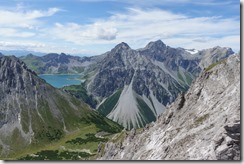 Above left: There was a short traverse to begin with before we reached the D section. Above right: The views were pretty nice. 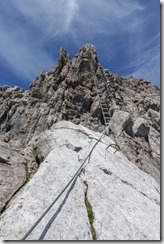 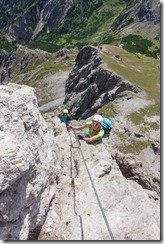 Above left: There is a long swinging ladder section that adds some fun. Above right: The route was happy enough that we all did some grinning.

My alarm went off at the happy hour of 4 am. Leonie got ready for a mountain marathon in Allgäu and Markus picked me up 40 minutes later and we drove to Hohenems. We had entered the Highlander Radmarathon, or perhaps the Rund um Vorarlberg Radmarathon. Both start the same but one is not so far and you can choose which you do on the way.

We had decided we’d ride together and at 6am we set off with 1000-ish other people towards Bödele. We had started well back and had to do some overtaking on the flat towards Dornbirn. We rode the first climb at a good pace but not too fast. We had a good bunch after the descent and on the way towards the Hochtannberg Pass ascent. Markus wasn’t feeling so fit so we stopped at the food station and ascended Hochtannberg at a not too crazy pace.

At the next drinks stations we decided we’d ride together to Flexenpass and then I’d continue at my pace. I pulled the bunch until Lech and then some speedy girls set the pace up to Flexenpass. I left Markus at the feed station there and rolled down the neutralised section from the pass. Then I worked with a good group to Bludenz. I probably pulled a bit too much as I was feeling a little tired once we arrived at the food station. Markus rolled in a few minutes later and I talked to him for a bit. He decided to do the shorter Rund um Vorarlberg not because of his legs but because now his freehub seemed to be playing up.

I started into the second 2000 vertical metres of the Highlander. Just like in 2014 I began to be passed by many people. The ascent to Furschinajoch was horrible but I didn’t feel quite so bad as in 2014. Still I was very slow and was passed by a bunch of people. I’m too heavy for so much climbing.

And now it’s magically 2021 so who knows what happened… I remember the last part of the race not feeling as hard as in 2014. I think I had a speedy descent from Furkajoch but got stuck behind a caravan in the tunnels. 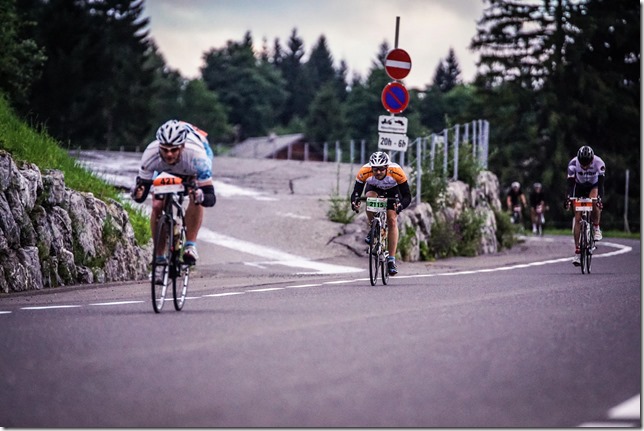 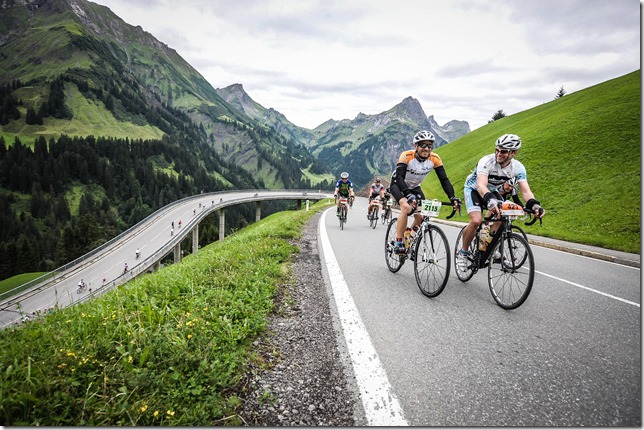 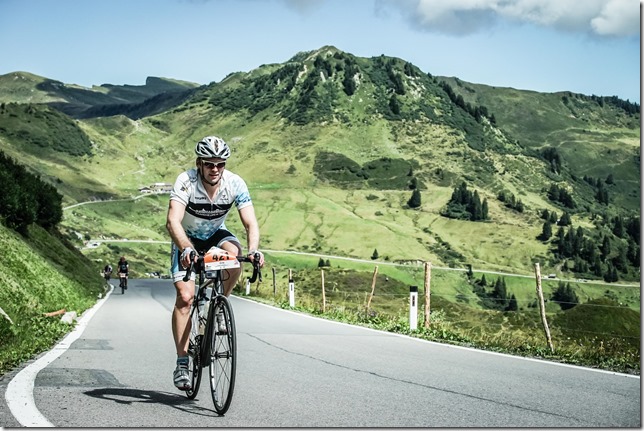 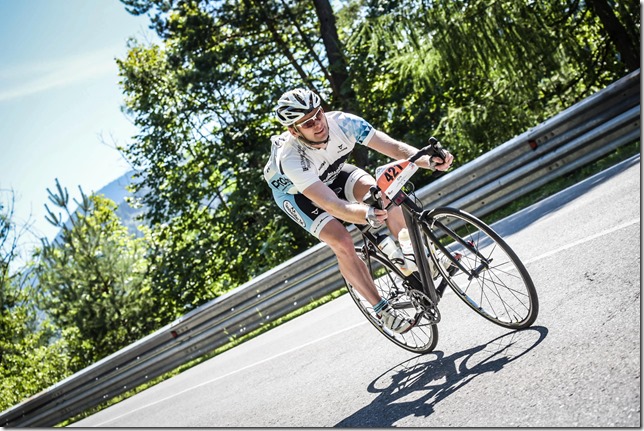 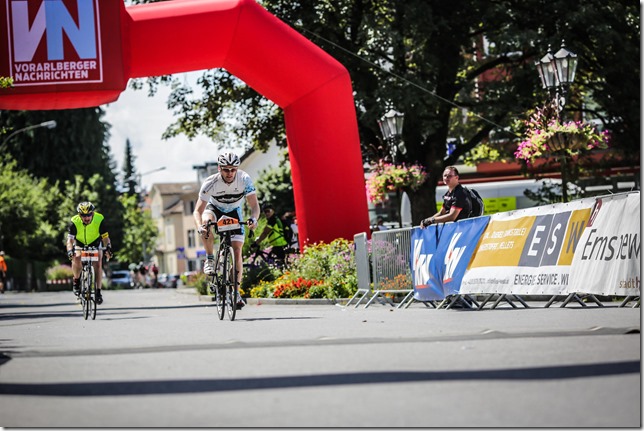 1) Markus and I descended from Bödele together.

2) Markus and I rode together for much of the race.

3) I was starting to hurt a bit by the time I got to Furkajoch.

4) Going down was still easy.

5) It was good to cross the finish line.