Leonie and I went to check out the Löwenzähne, a climbing area in the hills above Hohenems in Austria. It’s a bit of a walk from the car park at Schuttanen to the rocks. We took a round-about way through some tricky terrain so it probably took us about 40 minutes to get there. The area consists of a bunch of towers three of which are the Löwenzähne (“lions teeth”). We set our sights on the middle “tooth” and set up for a multi-pitch route (named Normalanstieg in the guide book, 4, 3, 4+) which would take us up to the top of the tallest tower. 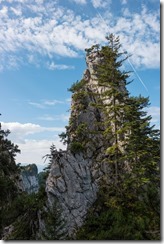 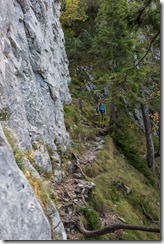 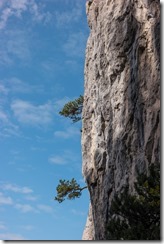 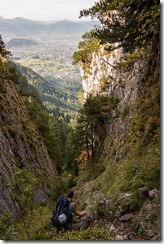 1) Leonie and I decided to try some climbing at the Löwenzähne above Hohenems in Austria.

2) We took the route through the forest to the rocks. It’s also possible to take a forestry road to the base of the rocks.

3) I don’t have a good photo to show what the rocks look like from a distance but they are impressive. There are three lions teeth that extend perhaps 150m out of the ground(?).

4) We climbed down to the start of the climb.

The routes have an alpine feeling by which I mean the bolts are spaced far enough apart that you wonder what use they actually have. If I had had some trad gear and had known how to place it I would have been happier. Instead I managed to thread a sling at one point and managed not to fall at the other points. The first pitch was only a 4 anyway. At the top of the first pitch there was a large flat area to sit. I secured myself to a large metal ring connected to a piton that had been banged into a crack in the rock. From there I was able to belay Leonie on top rope.

We sat around in the sun at the top for some time pondering what to do. The next pitch was an easy traverse (grade 3)  but I could only see two large abseil rings. After much sunbathing I started on the second pitch. It was very short, just 4 or 5 metres. I was then standing between two rock towers on a large flat area. The only issue was a lack of anchors. There was no place to set up an anchor and no fixed bolts. It would not have been a problem to belay Leonie over if she didn’t fall but if she had fallen after unclipping my second draw it could have pulled us both out from between the towers and down the front side to the ground, which looked like it was something like 60 m below. 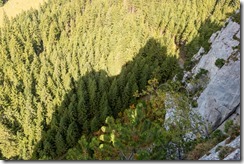 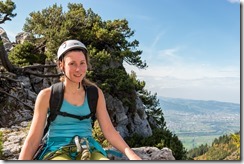 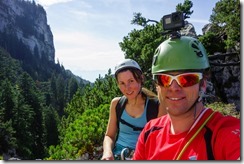 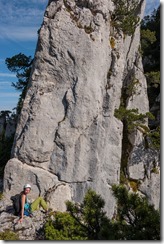 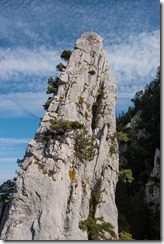 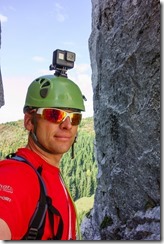 1) The drop down over the back of the crag is huge.

2) We sat at the top of the pitch and contemplated what to do.

3) We climbed an easy route up to the middle tooth. The route had an alpine feeling, i.e. a big distance between bolts. There were cracks for placement of trad gear but I didn’t have any. Instead I made do in one place by threading a sling. We climbed up the first pitch and sat on a large flat area and pondered what to do.

4) Leonie sitting at the top of our pitch.

5) The view past the middle tooth up to the biggest “tooth”.

6) I climbed the next very short grade 3 pitch to a large flat area between the teeth. There were no bolts so I couldn’t anchor myself so turned around and climbed back to the end of the first pitch. We decided to abandon the route and abseiled down and found a different route instead. I think the correct way is to climb up instead of traverse but it looked not well protected like sport climbing is.

Also, the next pitch was only a 4+ but the first bolt was pretty high and it didn’t look like there was much in the way of placement possibilities for the trad gear I didn’t have and only vaguely know how to use. So with that information I climbed back along the traverse and we abseiled back down to our packs at the bottom of the climb.

Instead we headed down to the edge of the towers and started a multi-pitch route there (Westkante according to the guide 4+, 5- 3). I lead the first pitch and then belayed Leonie on top rope again. The distance between the bolts was still a lot compared to the normal sport climbs I’m used to but the anchor at the top seemed a little more modern with two bolts and a chain and clipper.

I lead the following 5- with some more large gaps in bolts and then Leonie lowered me back down as she didn’t think she’d manage the pitch. From there I pulled the rope down until it managed to get stuck somewhere. Grrrr. Luckily we had been carrying a second 60 m rope so I climbed back up with the second rope. Freed the first one and placed it around a rock and abseiled/down climbed back to Leonie. We then abseiled down to the ground and headed back in the twilight which rapidly turned to darkness to the car.

A nice day out. 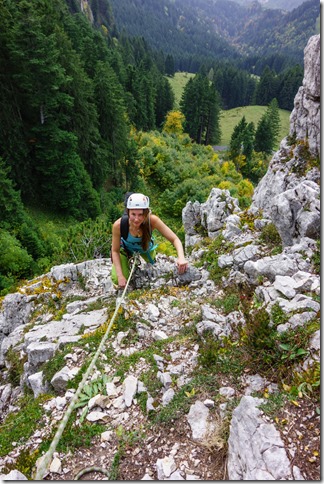 Above: I did two pitches on the next route we found but we turned around again as I didn’t think Leonie would manage the 5- on the second pitch.