Leonie and I took Friday off and drove towards Lausanne for our almost annual running race, the Humani Trail. We got to Les Diabrelets in the afternoon and went and checked out a klettersteig that was not so far away, just up the valley below Col du Pilon. We picked up our race packs and set up camp.

Saturday dawned with low cloud but it had dried off after the rain during the night. We started quite late at 10:15 am and by this time it was a bit warmer and not looking too bad. I decided that the trails would be very wet and that the best tactic would be to go hard to begin with to get a good place on the narrow muddy single trails. Leonie was amongst the crowd at the start line and I didn’t see her until the race started. I set off at a 4 minute/km pace and weaved my way through the throngs. I spotted Leonie also running fast and passed her. The hoards were thinning out towards the front and for a while I could see the front runners ahead. I kept running fast (too fast for me) until the first climb where I figured most people would walk and I’d be able to hold my position. The tactic worked well and I ended up ahead on the first trails. I managed to pass a few people and generally keep my position.

The course ascends steeply for some time then drops briefly and then heads up again. It carries on like this until you reach a ridge. Suddenly, as we were climbing, we left the mist and were treated to sunshine and blue sky. Fantastic. I was still well placed as I reached the ridge but soon realised that I was a bit slow on the flat and much too slow on the downhill. I was overtaken by a few guys as we descended. More ups and downs and then a down to a lake. Usually there’s a drink station at the lake but not this year. We started to climb again at a walk. A group had caught me up but I lost them again  on the ascent and passed a few more people. I seem to be relatively strong on the steep climbs probably from road cycling.

Next came a fun ridge run with huge drops down to the valley floor on the right hand side. This is probably the most spectacular part of the race. We could also see bigger snowy mountains off in the distance.

The photo drone buzzed overhead and I part hobbled, part crawled using my arms to pull me up the last steep climb to the highest point of the race. Following this we had a knee jarring descent to a drinks station. Unlike previous years we didn’t run around the small lake there. This might have saved us a kilometre perhaps. I was a little slow at the drinks station and the woman and couple of guys that had been following me left first. Surprisingly my legs were still ok after the stop which hasn’t been the case in previous years.

After the climbing in the first half of the course it’s quite flat in comparison for the second half. I jogged along at a reasonable pace. The 15 km course joined with our course and a few speedy people flew by. We began to descend. I was still a bit surprised that I wasn’t being overtaken by hordes of people. A few overtook me though but maybe they were doing the shorter course. I seem to be a bit slow descending which I don’t remember being the case in the past. I should work on this.

My legs still felt pretty good although I started getting little twinges of cramp on the slight uphill before the final descent. My legs came right again and I caught up to a group of three guys in the riverbed at the bottom. As we took a right and headed up another arm of the river they got away but once we started heading slightly down again I caught them up. The course had been changed again slightly and we stayed in the forest until just before the finish line. I passed the group just before the finish and ran hard to cross the line.

This was by far my best Humani Trail yet. No idea why my legs worked so well. Can’t have been due to training… I think the slightly cooler conditions helped me. I finished in 3:28:04, well ahead of my time from two years ago. Leonie came in at 3:52:36 and placed 9th woman overall. I placed 27th man overall which is very good for me and 15th in my category.

We cooked curry and lazed at the campsite after the race.

Sunday was Leonie’s Birthday and we did the easier part of the klettersteig we had tried on Friday. It was a nice warm autumn day like it has been every year after the Humani Trail. The area around Les Diabrelets is very nice and worth checking out. There’s quite a lot of ferrata routes and climbing there. 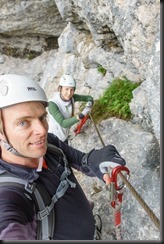 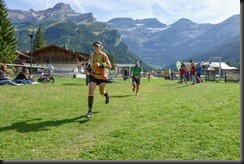 Above left: We started doing a klettersteig the day before the race but rain put an end to that idea. Above right: The race for some reason was the easiest of all the years so far. I’m not sure why. I think the cool start helped my legs a bit. Don’t think it was due to training! 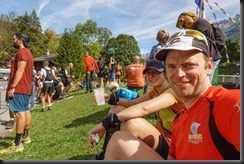 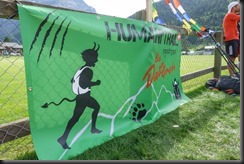 Above left: We’ve been lucky with the Humani Trail. Each year the race has ended in sunshine, at least as far as I can remember. The one year we missed it, it snowed! Above right: The start is in Les Diablerets which translates to devil in French speak. 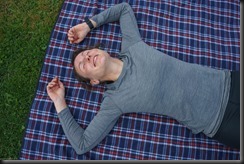 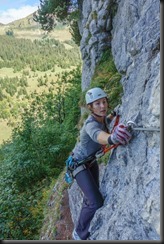 Above left: Leonie was happy to lie down after the race and then munch on delicious snacks and eat curry. Above right: We did the easier section of the klettersteig below Col du Pilon on Sunday. It was Leonie’s birthday. 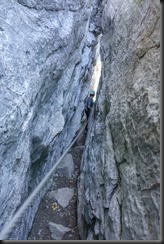 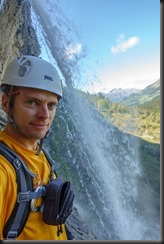 Above left: There wasn’t much room for fatness on the last section of the klettersteig. Above right: There’s a funky waterfall at the end of the klettersteig. If you brought your rope pulley with you then you can take the zip line to the other side of the hill. Looks fun. 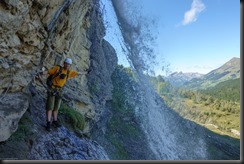 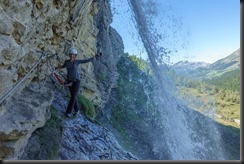 Above left: It’s always good to pose when you have the opportunity. Above right: Leonie agrees. Posing is good.

Above: The run on Strava.