Leonie drove to Lindau on Wednesday night. The original plan had been to go to the Brenta dolomites and re-enact the nice little trip we had there in 2016 but the weather was not playing nice so instead we made a new plan. The new plan was to go to trusty Ticino where the sun always shines. However, when we checked the weather forecast on Thursday morning the sun was not shining. Oh no, trusty Ticino had failed us. As the sun was shining in the Rheintal we drove to Götzis and did the via Örfla klettersteig leaving out the D section at the end. Then, as that wasn’t enough, we drove to Gargellen and did the Ronggwasserfall klettersteig there. Leonie powered through and didn’t need to be belayed like the first time we did it. This was good as I didn’t bring my rope. We stayed at her flat in Innsbruck/Hatting for the night. 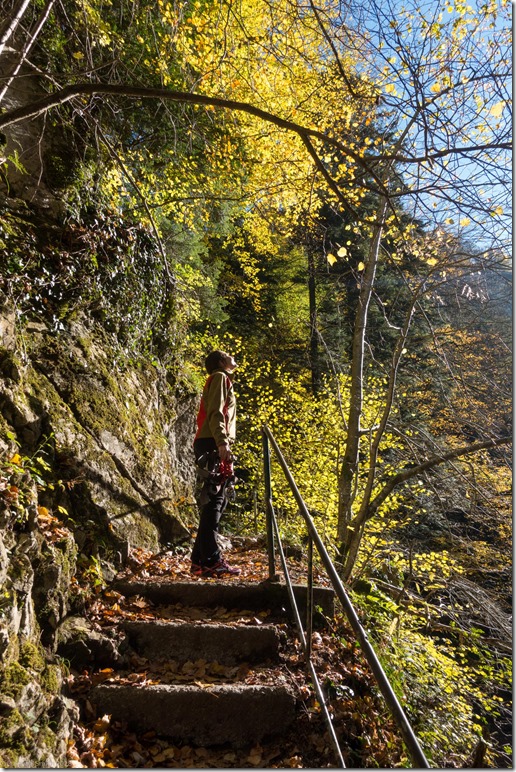 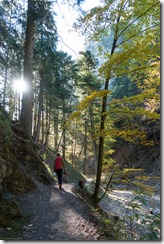 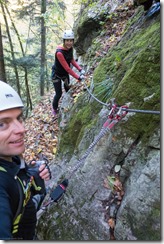 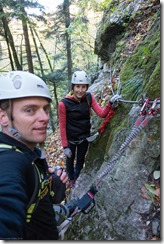 1) We headed off to do the via Örfla klettersteig. The sun was out and peeping into the ravine on the walk in. Leonie took a moment to bask in it.

2) The route goes up a narrow valley before taking a left and following a river.

3) The klettersteig is easy except for the last section which is graded D. You can avoid it though by escaping out of the ravine to the left.

4) We did some posing as usual. 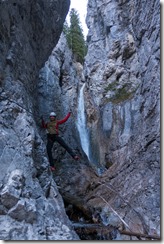 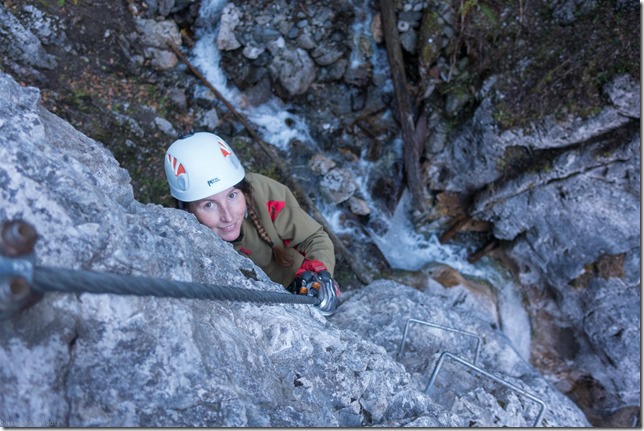 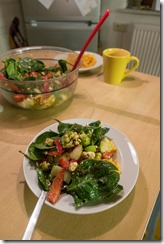 1) There were plenty of autumn looking colours about.

2) We drove to Gargellen in the afternoon and did the Rongg-Wasserfall Klettersteig.

3) Leonie didn’t have an issue with the height like she did a few years ago when we first did this one.

4) We had dinner at Leonie’s flat in Hatting.

On Friday we struggled to make up our minds what to do but ended up driving to Mittenwald and taking the gondola up into the mountains (Germany’s second highest cable car no less). We did the Mittenwalder klettersteig. It started in snow but that soon vanished and we spent a few hours wandering along the ridge. It was a mix of Grade A and B but quite nice. It was quite windy up so high. We got out of the forest in drizzle and walked back to the car in the dark before driving back to Hatting for the night. 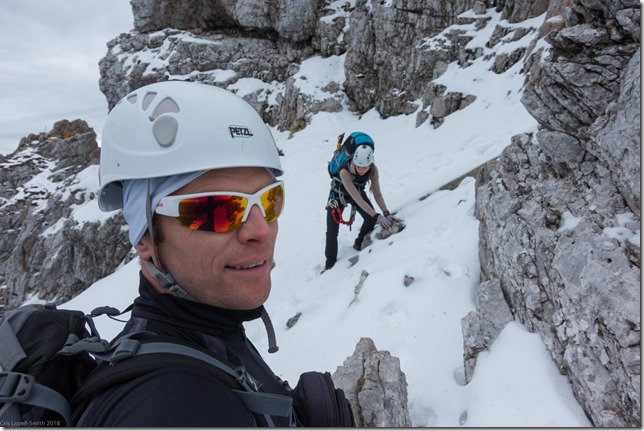 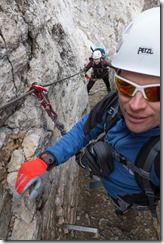 1) We did the Mittenwalder Klettersteig. The first part was under a dusting of snow.

On Saturday we woke up to much grey but the webcams in the hills were saying blue sky so we headed to Hofer for some delicious goodies including the very tasty Hofer Nutbread. Then we drove to Hochzirl. Despite only planning an overnight trip my tramping pack was full. We headed off in the mist but after an hour or so of walking we left the mist into sunshine. Sunshine… We reached the Sollstein Haus after a bit under 3 hours of walking. The hut was closed for the season but the winter room was open. It’s a little building near the hut with a sign saying “winterraum” so you don’t get confused. It sleeps six but would be even more comfortable with four. There was plenty of food left in the hut. Probably we could have walked up without bringing any ourselves. There’s a small table, a bench, and a wood-fired stove. There are a few pots and plates. You could happily light the fire and cook on the stove-top. I had brought my MSR cooker though as we weren’t sure there would be wood and after all who trusts that old fangled technology anyway.

We ate lunch and later went to check out the little klettersteig near the hut. There’s an interesting wee climbing area also and the klettersteig loops around this so that you can set up top ropes. Leonie decided it wasn’t for her and I decided my crocs would be just perfect for the D section, which they were. It didn’t feel like a D section…

We shared the hut with a couple of mountain bikers in the evening and they got the fire going while we cooked a curry outside and watched the sunset. 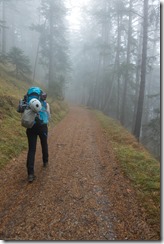 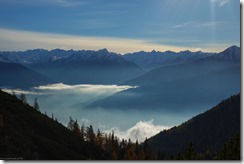 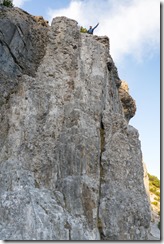 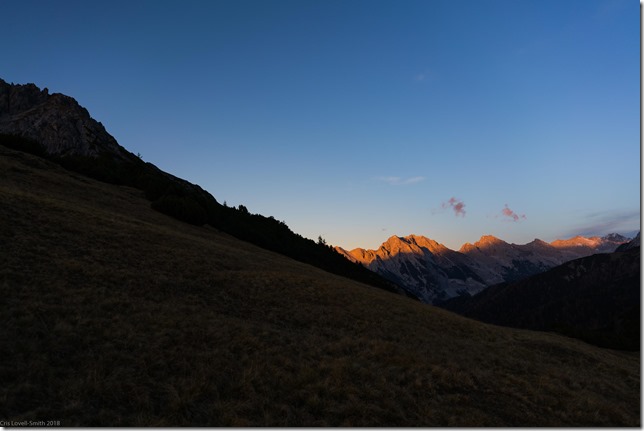 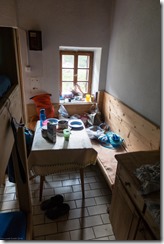 1) On Sunday we risked it and walked up through the fog to the Solsteinhaus.

2) We ascended above the fog as we climbed and had a great view down into the valley.

3) I did a short sport klettersteig near the hut.

4) Autumn colours near the hut.

5) A nice sunset looking down into the valley.

7) We stayed in the small cozy winter room that was unlocked.

On Sunday we headed up to the Erlspitze via the Zirler Klettersteig. This involved walking up to the Eppzirler Scharte. The route up was steep and eroded. From the saddle we could see down into the valley behind and also to the start of the klettersteig. The route was easy, a mix of A and B sections but it was still quite interesting. The erosion has lead to lots of rock towers forming. Well, something caused them to form. I’m not a geologist. About 3/4 of the way through there is a D section that I did and Leonie skipped, walking around it. Then a few more easy bits and we were at the summit. We walked back down the normal route to the hut, made lunch was consumed and then we walked down to the car.

I caught the early train back to Lindau on Monday morning ending a nice few days of exploring. 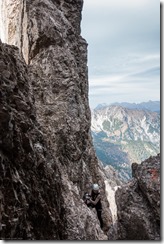 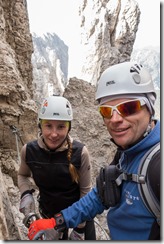 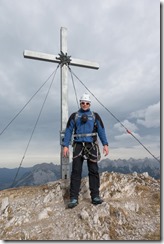 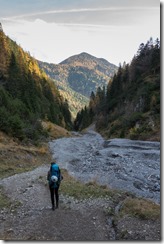 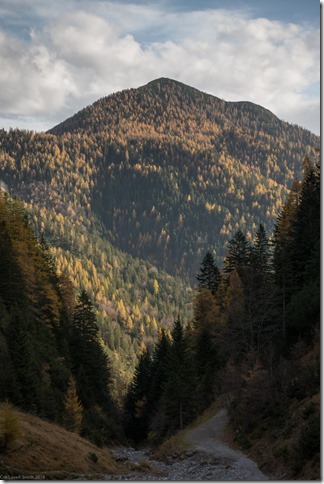 1) The following day we did the Zirler Klettersteig up above the hut.

3) And some more posing at the summit.

4) Leonie looks down the valley.

5) Autumn colours on the descent.