Hmmm, what to say? Last year was much better.

Leonie and I drove to Lienz on Friday evening. On Saturday we did a couple of klettersteige, and on Sunday we did the Dolomittenrundfahrt. I was pretty happy and a bit surprised how the race went last year. I got 23rd place in my category. This year it was a little different. Let’s start with some nice pictures of the klettersteige. 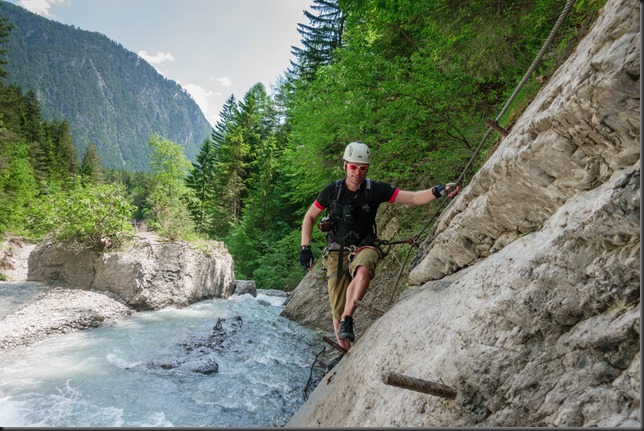 Above: Leonie and I went and did a couple of klettersteige before the race. Here I am at the start of the Pirknerklamm. 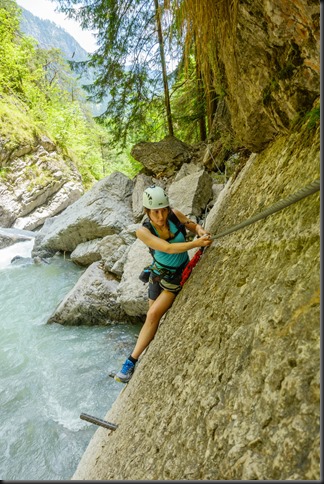 Above: The route was nice, just above the river. 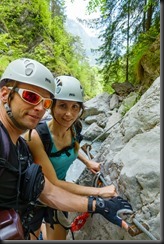 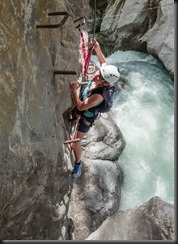 Above left: The route was officially closed due to damage after flooding or something but we decided to check it out anyway thinking we would turn around if it was dubious. Above right: Leonie finds bits like this a bit spooky but she did well. 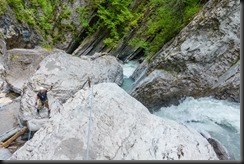 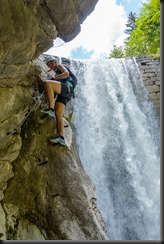 Above left: Definitely a nice route up the river. Above right: We had to climb out of the klamm at the end of the first section past a big waterfall. 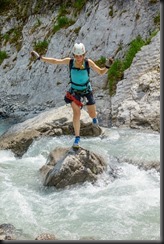 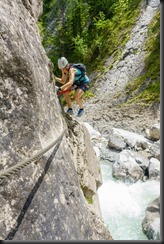 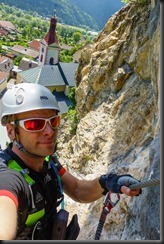 Above left: The second was more open. Leonie tries to keep her feet dry on the river crossing. Above middle: The second section was scenic like the first. Above right: We tried another klettersteig after the first near a small town.

We both started in the elite block again. Last year the race went from zero to full speed at the gun. This year they neutralised the start a little and the pace wasn’t so extreme. We still had a police escort at the front but no police helicopter this time.

There was a crash in the bunch in front of me not long after the start but I managed to avoid getting tangled up amongst the cyclists and continued. I wanted to get a good bunch so rode up near to the front at the beginning of the first climb and cycled as hard as I could. This worked quite well for about half of the ascent and I passed many people. It didn’t work so well for the second half and a few people passed me and many people got away up the road.

At the top of the climb I hooked onto the back of a bunch and stuck with them for quite a while but I wasn’t feeling particularly springy and fresh and I realised I wasn’t going to be able to hang about with them for the entire race.

I kept up for a bit along the rolling course but then slipped back to another bunch. This continued for much of the race until I had slipped a long way back down the field. I was feeling even less springy by now. The climbing is essentially over around 80km and around the time we reached the valley back to Lienz a bigger bunch caught up again and I hung on to that. We made a good pace down the valley. I didn’t bother sprinting at the finish.

Unlike last year I didn’t go back to get my camera as I was pretty sure Leonie wouldn’t be far away. In fact, during the race I was expecting her to come flying by in one of the bunches. I was right, she rolled across the finish line about 10 minutes later. Far too close behind me for comfort! Probably she’ll be faster than me next year.

We took some posy photos at the finish line and complained a bit how we both had bad races. We headed back to the camp site and got ready to laze until Leonie found out that she had got 3rd place in her category. Hmmm… 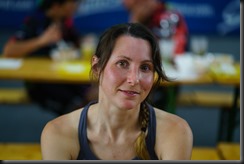 Above: Leonie at the prize giving. 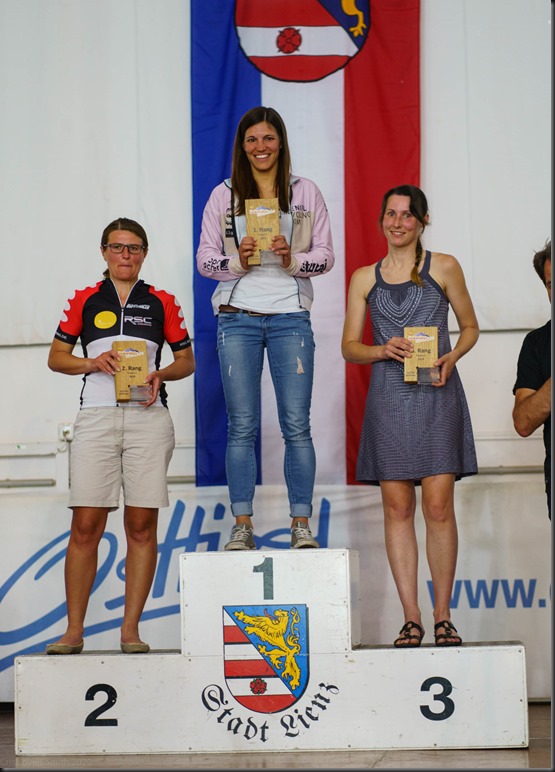 Above: Leonie did extremely well getting 3rd place in her category. 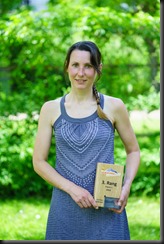 Above: Leonie posing with her trophy.

After the prize giving we did some premium lazing.

Today was the last stage of the Tour de Kärnten for 2019. It was reasonably successful.

The format this year was different compared with the last few years. In the past we have started either in small groups or alone and the course was a pure hill climb. This year it was essentially a short road race with a hill climb to the finish line. Not that this was a bad thing.

As usual, we started neutralised from Ossiach. We headed to Feldkirchen and then took a left taking the same ascent from the Dach der Tour. The first 35km were the same until we reached the hill climb. A sharp left turn and we started climbing.

My strategy for the stage had been not to go too hard to start with as I thought my legs would probably blow up on the climb. So I rode at a moderate pace on the first climb and stuck with a bunch through to the last climb. I bridged a gap at one point but otherwise didn’t do any work.

This proved to be a good tactic as my legs weren’t in bad shape for the last 700 m of ascent. I was feeling like a tasty pie or perhaps a banana could help me but since none were available I made do with my caffeine filled jubes. I rode to the front of the bunch as the climb began. I was worried my legs would die halfway up and the bunch would flow past me again but I got into a good rhythm and started to pass many people. I caught up to a group that must have been the remains of the next bunch and slowly passed them too. Good times.

The road became much steeper, 16 percent according to my cycle computer. I kept puffing my way up. I could see snow further up and it was starting to get a little cooler. The 1000 m sign appeared and then after more panting the 500 m sign. I tried to sprint across the finish line but it was pretty pitiful. Still, I was quite pleased with my effort.

There was snow near the finish line and on the hills. The sun was out though and it was surprisingly warm. I rolled back down after a short break. There was a large group waiting at the bottom of the climb and I jumped on the cycle train heading back to Ossiach getting there in half the time it had taken to ride the stage.

And with that the Tour de Kärnten was over for 2019. It seemed to go quite quickly this time around. I didn’t seem to feel as tired this year. Maybe it was the cooler weather… or did I just ride more slowly.

Today was good. Today was fun.

The race started neutralised and had the same problems as usual on the first hill but unlike last year on this ascent I wasn’t feeling super frisky and didn’t overtake multiples bunches. My legs felt a bit sluggish but as the climb went on they felt a bit better, so that I thought I’d ride to the front of the bunch, and then I thought I’d ride a bit off the bunch, and then I thought I’d ride away. I caught up with a few stragglers at the end of the climb and we rode together. This was a bit silly as with a bigger bunch I could have conserved energy. It was silly but also quite fun, and it’s supposed to be fun.

After a bit I turned around and Veit from Casa Ciclista had bridged across. The bunch worked well with us all taking turns until I pushed a bit hard and we dropped half of the group. Ooops. We kept working just three of us until we caught another guy and the four of us worked well until the next big climb. We kept the bunch behind us away and the climb also went pretty well. I guess I could have ridden faster at the start of it but by the top I was going all out, which was nice. Still, Strava tells me I was 3 minutes faster on this climb in 2013 but I suppose the conditions were different and I think I had a motivational bunch that year.

It was another grey day and cold . The road was damp on the climb to Hochhindrl. I reached the summit with some stragglers from the bunch ahead and could see the big bunch that I had escaped from not far behind. I decided against stopping to put on my jacket and descended into mist. Visibility was extremely low, maybe 50m. I descended cautiously behind a few other guys slowing before the wet corners. We passed a guy who probably didn’t slow enough standing by the side of the road. The descent this year was on a smaller side road than the usual one we take with thick woods on each side. After a while we got out below the mist and a bit later the gradient flattened off.

I regrouped with a few and we had a slight downhill still so that we could power along. This was really really fun and reminded me why I like cycle racing. I took a couple of turns at the front but then looked behind and saw I’d dropped the rest of the group through the winding bends.

We headed back towards Feldkirchen, however, on the way the large bunch that we had got away from at the beginning of the race caught up.

The race was originally planned to finish in Ossiach but somehow the local authorities decided not to allow it and instead at the roundabout in Feldkirchen we headed off along another main road before taking smaller roads.

As we were cycling along a small road in the forest again I saw the 1000m-until-the-finish sign up ahead. A number of guys moved forward in the bunch including me as we began to climb a small hill.

I sat at the front of the bunch with a few people. Not ideal for sprinting as I was towing the bunch. Shortly before the finish three of us started sprinting. I couldn’t keep up with the others and another guy passed me too but I kept in front of the main bunch to cross the line.

A nice stage. I cruised back to the Ossiachersee for some lazing.