I rode the Dreilaender Giro on Sunday. As we entered late, only the B Strecke was available but it’s still a good challenge and is 120km/3000m. I was put in the second start block but Leonie was unfortunately put into the 4th.

Eruope was in the middle of a heat wave and the 6 am start was actually quite good. The race starts in Nauders and we headed over the Reschenpass and down to Prad am Stilfserjoch. Our average speed shortly before the township was 42.8 km/h due to the long flowing descent from the Reschenpass. After Prad the long long ascent to Stelvio began. It’s something like 1800 m. I was happy with how my legs went. I climbed at an ok pace not being passed by too many people. My heart rate remained reasonably low during the climb at around 160-ish which was probably good, although it means I could have ridden faster with the risk of blowing out later on. There was still snow beside the roads in patches but it was warm while riding up.

I rode over the summit and the start of the ride down as much cooler, almost a bit cold. There was much more snow on this side. I passed a few guys on the ride down and then I worked with a small group as we descended more gradually back into the valley. The final part of the race was the ride back up to the Reschenpass but on an old side road. The course turned onto a cycle way and by that stage I just had one guy who had better legs in front of me who towed me towards the top of the pass. We had a few people on the last downhill to the finish line and we worked together smashing along around 50 km/h. The finish was suddenly there and I crossed it without any need to sprint.

I waited for Leonie to finish but missed her crossing the finish line. She drove back to our bakingly hot camp site in Pfunds and I cycled back the 10 km downhill. She had placed again so we went to the prize giving in the afternoon. She had got 3rd place in her category and had won the cup trophy. Her boyfriend Christian had placed first overall on the short course.

Johannes and I headed off for a long weekend of climbing. First stop was Konstein where we met Sam and Sebas and some other climbers. We had picked up Brendan on the way too. We did a few routes there in the forest and in the evening we drove to Regensburg and went out to sample some beer at a festival in the town.

On Friday we went climbing near Regensburg and then hung out at a lake with Domi who met us there. The evening had another trip to the beer festival for us.

On Saturday Johannes and I packed our bags and farewelled our hosts and set sail for the Salzkammergut. We arrived at the Mondsee around midday and headed up to the Drachenwand klettersteig. I did this with Brendan a few years ago but completely failed to blog about it despite having it on a todo list for years. Such is the power of my organisational skills.

The weather was very good for steiging so we steiged merrily, ascending quickly. Most people had already finished as we were late starting. We took some posy photos on the swing bridge and continued to the top. The klettersteig is pretty nice and not too hard and the views down to the Mondsee are great.

We headed off to a campsite at the Wolfgangsee afterwards.

On Sunday we headed back to the Plombergstein. We were there in 2017 with Ari, Sebas, Sam, and Brendan. Johannes was keen to get revenge on the nasty multi-pitch climb that he and Ari had trouble with on our last trip.

The climb went smoothly, well mostly. The way the rock sloped made it hard to hear each other which was difficult at the end of each pitch.

We drove back to Lindau in the afternoon.

The rest day seemed to have helped… or at least I don’t understand my body. My legs worked well today. We headed off at 9 as usual and rode down the valley taking a right hand turn and heading up to Passo Valles. I was feeling good and rode off with Thomas to the pass. I’m not entirely sure how but I rode away from him and got to the top with my heart rate up near maximum. 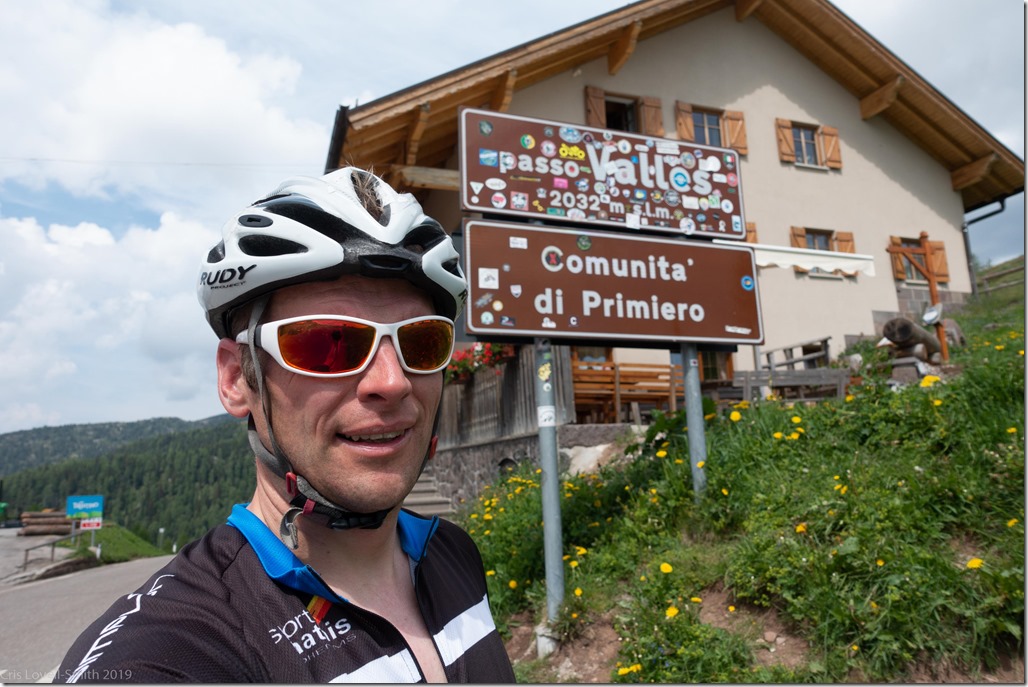 Above: Thomas and I rode hard up to the first pass.

We had a short descent and then a left hand turn. I followed Thomas up towards Passo Rolle. We duelled up to the pass. Thomas put in some hard attacks but I managed to close the gap until it came down to a sprint to the pass. I reached it with my heart rate up near maximum again. 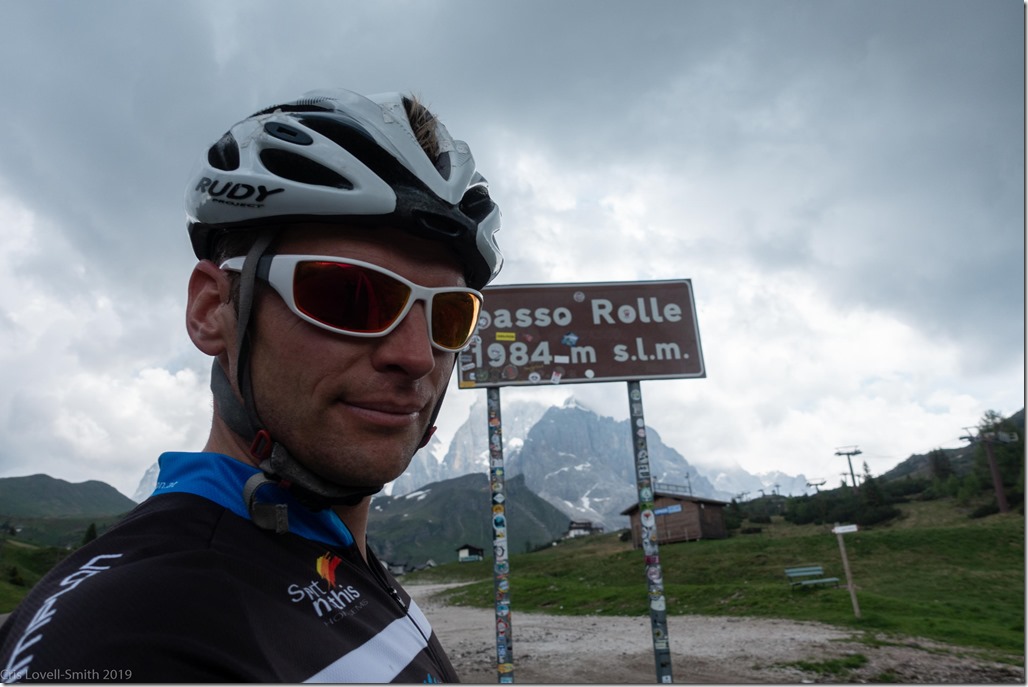 Above: Thomas and I rode hard again to the second pass. 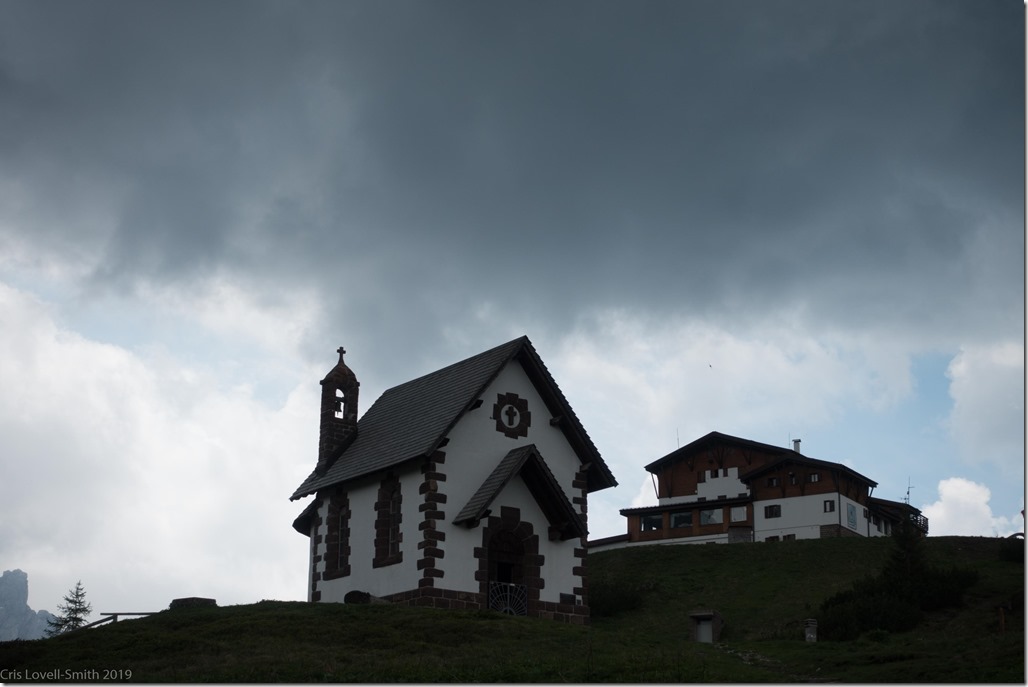 The descent from Passo Rolle was very nice. It was very very long without too many switch backs to slow things down, at least once we were lower. The views towards the mountains were nice. We descended into the valley and found a place for a short stop. We grabbed a bite to eat and then it was up to the next pass.

I expected my legs to be well and truly cooked after the first pass and then definitely after the second pass but they seemed to be ok still. Kind of. Marco and Thomas rode ahead and I rode with them. Marco dropped back and it was just Thomas and I again. It was steep and very hot. I considered telling him it was his pass and dropping back. His heart rate was 155 and mine was 187, which I thought was not going to give me much room to continue. But at one of the steep parts I gained a lead and then managed to ride away. The pass flattened off at the top and with a heart rate of 194 I puffed past the pass sign. 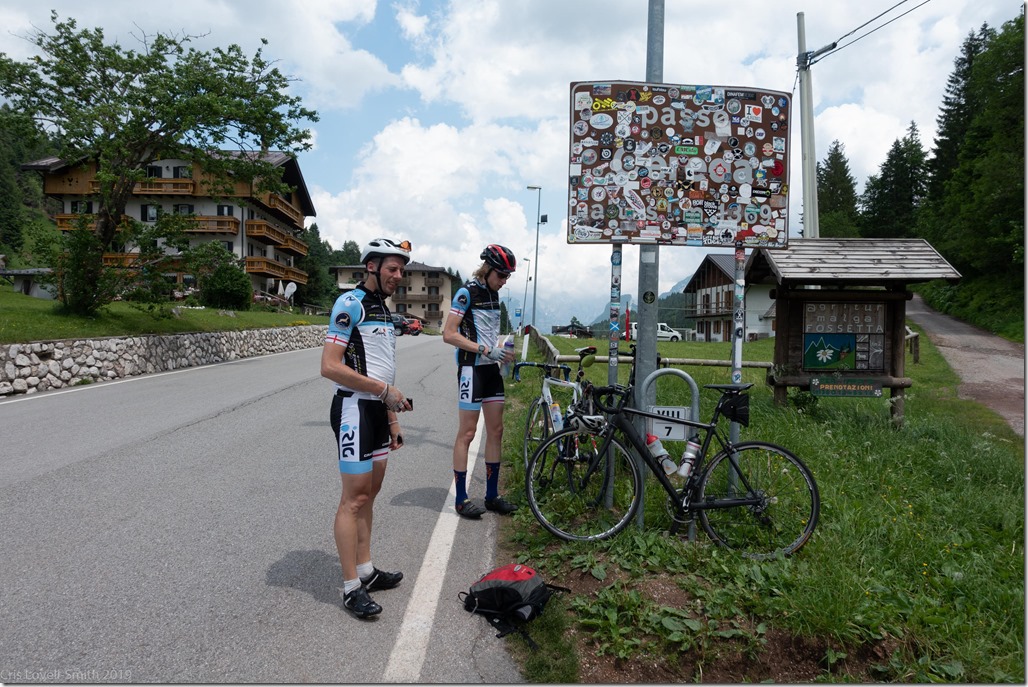 Above: And another pass at high speed.

We didn’t stay long at the pass as there were a few spots of rain already and dark clouds in one direction. We descended then had another short climb, then a very long descent, which was nice. Once in the valley we had a 20 km ride back up to our flat in Caprille.

A good day out.