I flew to rainy Wellington on a Thursday evening and met Craig at the airport. We jammed my gear into his already heavily laden Sentra and drove North stopping to pillage a Pak n Save on the way. We arrived at the Mangatepopo Hut carpark at the Tongariro National Park around 2 a.m. and unloaded much of the contents of the car into the shelter. We decided we’d be optimistic and packed our skis. After a short walk we were at the Mangatepopo Hut and were surprised to see the hut relatively full. We took the opportunity to make ourselves unwelcome by rustling around getting ready for bed.

The weather was a bit mehh on Friday morning and the snow conditions even more so, i.e. there was very little snow. We left our skis at the hut and went for a day walk into the park. There was a little snow by the time we reached the South Crater but it was mostly slush on the ground. We started up towards Red Crater ignoring the stern looking DoC warden on the sign board telling us about all the possible dire consequences of continuing. The snow hardened and after peering into the Red Crater we headed up along the ridge towards Mt Tongariro with crampons and ice axes.

It was quite nice picking our way along the ridge line and we could see blue sky behind us at points. As we ascended to the summit of Tongariro the mist that had been hanging around the summit cleared and we had somewhat of a view in some directions… As we decided which way to descend the mist rolled back in until we were in a whiteout. There was enough visibility to feel our way back along the ridge a little before we dropped down into the South Crater picking our way around a few bluffs as we went down.

Above: The visibility improved and we found our way down through the bluffs.

The visibility improved and it wasn’t long before we could see blue sky again. We stopped for lunch in the basin before walking back out to the track. To give us the full four seasons experience it started snowing on us briefly which turned to rain as we descended back down to the hut. 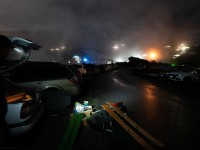 Above: After our walk up Mt Tongariro we drove to Whakapapa and got ready to ski tour.

We packed our gear and walked out to the car and then drove to the Whakapapa ski field on Mt Ruapehu. We loaded far too much stuff into our tramping packs, put our skis on our feet and toured up to the Tararua Tramping Club Hut not far up the ski field. We met Kieran and Cecile at the hut and Craig created a fiery chilli con carne (without carne) before getting into the scrumpy. 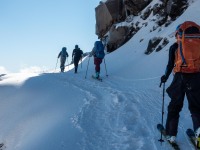 Above: We started skinning up the mountain. Rachel came with us with boots and crampons which proved more efficient than skis.

The weather on Saturday morning was not at all mehh, it was more along the lines of mmmmm. We packed a slimmed down version of our gear into smaller 40L backpacks and headed out. We toured slowly up the ski field, picking our way through the rocks. Kieran and Cecile were on their skis too and Craig’s friend Rachel walked up wearing crampons and demonstrating how inefficient it is to lug skis up a hill. 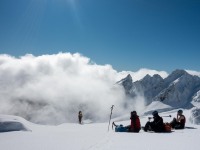 Above: The top of the skifield was closed so there was nobody further down and again nobody above the top lift. We had great views.

The sun beamed down from above and the sky put on its best blue. Craig farted, not for the first time. We ate a snack and looked back down at the slopes below us.

We continued up to an icy last section before a saddle. I crunched on some stalactite ice blocks hanging off the big chunks of snow and ice at the top while everyone carefully ascended the icy slope. We swapped our skis for crampons and walked along the ridge before dropping down and taking an easy line onto the Summit Plateau. We had a late lunch and then toured over to the Cathedral Rocks. There was a breeze on the plateau and it was more sheltered by the rocks.

Rachel said goodbye and set off to walk back down and we began to dig out two large flat pads for tents into the side of the snowy hill. We pitched the tent and began sorting out dinner. It got very cold. I burnt Craig and I some dreadful dinner hampered by the cold and the cooker that was struggling to make things boil. The sun had set and there was an awesome orange glow across the plateau. Looking in the opposite direction, the big cliffs along Tukino Peak were a rich dark Mauve. 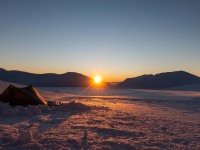 Above: The sun sets.

We said good night and scurried into our tents, Craig entering first and getting ready before I did the same due to the lack of space. It was very cold by now and I put on thermals, fleece pants and my down jacket before burying myself in my sleeping bag. As it was only 6:30pm I found it hard to sleep, which was the pattern for much of the night. I dozed. I got up in the night to pee and looked across the plateau that was illuminated by the full moon. It would have been an amazing night for a tour.

The sun was out again in the morning and we packed up camp. There was some wind but it wasn’t too bad. We skied around and traversed on a slight angle to a spot above the Whangaehu glacier. We removed our packs and dug out a whole for them. Then without the weight of kumara, potatoes, and other alpine-inappropriate foodstuffs from yesterday’s poorly planned dinner we skied down the glacier. It was so good to be back on skis and after a few turns I felt like I remembered how to ski after my two year break. The snow was firmly packed and a bit icy but I didn’t care, it was a great feeling. We stopped at a few places during the descent and then turned around and started to skin back up, which was also quite pleasant. 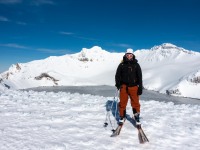 Above: The crater lake is behind me and the water is steaming.

We retrieved our packs and skinned around the side until we had a view into the crater lake. Acidic grey water bubbled and steam rose from the lake. We skinned up between Dome and Paretetaitonga and got our skis ready for the downhill. We skied down the Whakapapa glacier, stopping for lunch along the way. The snow was icy at the top but we all stayed upright. We traversed back over towards the ski field and the snow improved. We had a great view down to the plains below and cloud in the distance. We picked our way back down through rocks on the ski field and then fare-welled Kieran and Cecile. Craig and I packed our tramping bags at the Tararua Tramping Club Hut and headed down to the car before driving the long drive back to Wellington to sit out the bad weather predicted for Monday.

We had a delicious pizza night at Kieran and Cecile’s house on Monday evening and caught up with Rachel again and some old faces I hadn’t seen for a few years and some new ones.

Above: Our ski tour up Mt Ruapehu.

Above: The same thing on NZ topomap.