I spent a few days canyoning and climbing in Italy with Craig, Alec, Verena, Rachel, Jeremie and Patrick.

Verena drove down to Lindau and met me there. So as to make use of the day we did the short Känzele klettersteig near Bregenz. We then drove down to Italy to meet the others, arriving in the evening. Our accommodation was a funky Air BnB in a small village to the West of Lago Maggorie.  According to Craig, it had the world’s most comfortable bed. I was inclined to agree with this as I was on the other side of it. Craig, Alec, and Patrick had already done a canyon during the day as we were driving down and Rachel and Jeremie weren’t yet there. 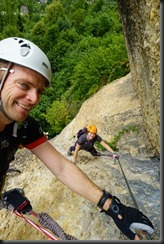 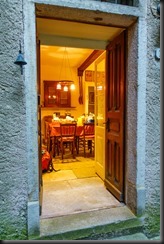 Above left: Verena and I did the Känzele klettersteig in Bregenz before driving down to Italy. Above right: Our Air BnB was large and full of ornamental bits and pieces. There was also a lot of wood and stone. It was quite nice in an old kind of way.

Above: The canyon on the first day was a bit splashy. Unfortunately my GoPro editing software decided to put the video together in reverse.

We went canyoning. The canyon turned out to be more technical than we were expecting. At one stage Alec and I were stuck in a pool trying to get out to the next anchor. We were reluctant to get too close to the flow leaving the pool as we couldn’t see how strong it was and instead were attempting some rock climbing moves to get up to the anchor. It took quite some time as the rock had few features and kept slipping back into the pool. We finally made it and the others came down to us.

Craig wasn’t feeling quite so good near the end of the canyon. I think my curry the night before didn’t agree with him. We decided to exit the canyon at an escape point and clambered out up the side. Craig set up a make shift handline that we extended down into the canyon. We laughed at how little time it took to get back to the top. 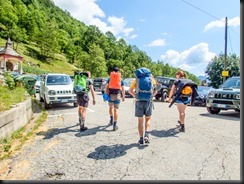 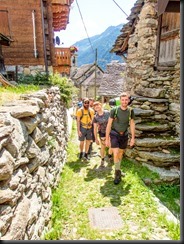 Above left: Here we are leaving the carpark to walk up the river to our first canyon. Above right: The path up the canyon went through a little stone village of picturesque houses. 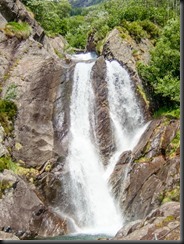 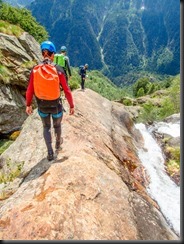 Above left: We started below this waterfall and headed further down river. Above right: We headed down the rock to the first abseil. 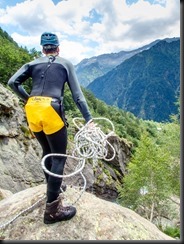 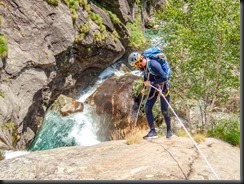 Above left: Craig sets up for the first abseil. Above right: Patrick was sent down as a guinea pig. 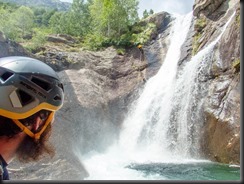 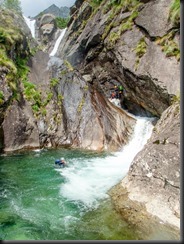 Above left: The first waterfall was a little tricky. The abseil started to the left of the flow but you had to move into the flow. The best way to handle the last few metres was to drop as fast as possible to avoid too much water. It wasn’t anything too over the top though. Above right: Alec gets ready for the technical slide down into the pull where Patrick is. There was an awkward jump across onto the slippery rock but we all did it without problems. 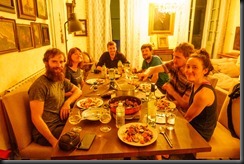 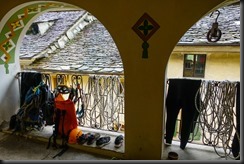 Above left: Rachel and Jeremie arrived in the evening.  Above right: We dried our gear out on the balcony of our funky Air BnB. It was filled with old furniture. It was old too. Big rooms with plenty of stone.

The weather was not so good and neither was Craig. The weather improved a little in the afternoon but unfortunately Craig didn’t. We drove to Ponte Brolla in Ticino and did some very easy multi-pitch climbing. It was so easy it was almost like walking but still it was nice. Jeremie and Rachel did a harder route together. 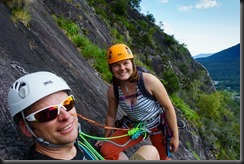 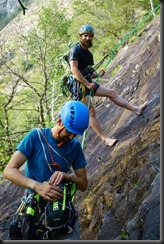 Above left: We did a very very easy multipitch climb. A little too easy but nice to mix it up a bit. Rachel and Jeremie did a harder route with more pitches while Patrick and Alec climbed on the route next to ours. Unfortunately Craig was trying to recover in the car by this stage. Above right: Patrick being a barefooted kiwi.

It was back to canyoning again and another “alpine start” saw us arriving at the canyon in the early afternoon. The canyon was quite short but spectacular. It was narrow and there was a small stone bridge crossing the canyon high up above. Who knows why. We had a long free hanging aquatic abseil in the middle and finished in a hydro dam catchment. We cautiously exited the dam avoiding the area near the race intake.

In the evening we hung out at the castle above the air bnb and attended some sort of guitar concert thing. The highlight was the buffet before the concert which we got stuck into. The music was less good. 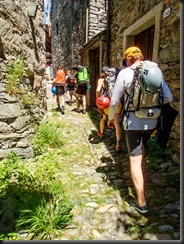 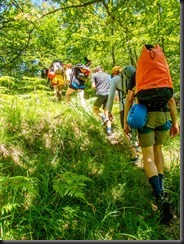 Above left: With the full team back onboard we headed out for another canyon. This involved trekking through another little stone house village. Above right: It must be a strange site seeing a procession of people with all sorts of gear walking through the forest. 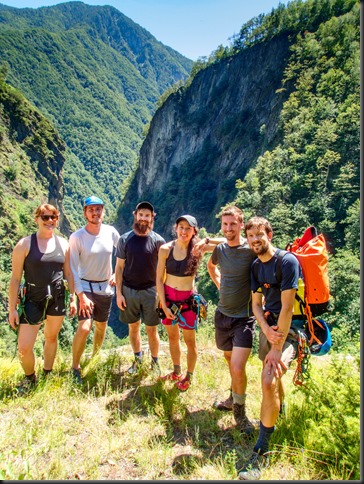 Above: Never pass up the opportunity for a good pose. 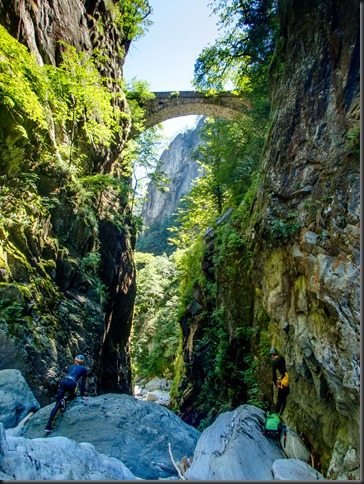 Above: The route down the canyon was beautiful. Steep tall sides and a random bridge crossing above at one point. 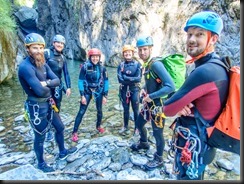 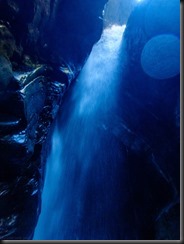 Above left: More posing. Note all the gear. Craig even had an ascender, presumably to attract the woman-folk. Above right: The canyon closed up above and we had a free hanging abseil down and under this waterfall. 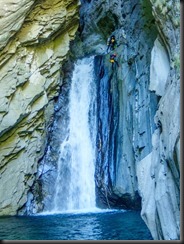 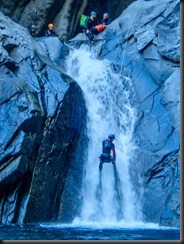 Above left: It was a really enjoyable canyon. Not too hard but really impressive and beautiful. It did however end in a hydro catchment, which was less beautiful. The guide warned about getting too close to the hydro intakes so we made sure we swam around to the left. Above right: Alec abseils through the flow. 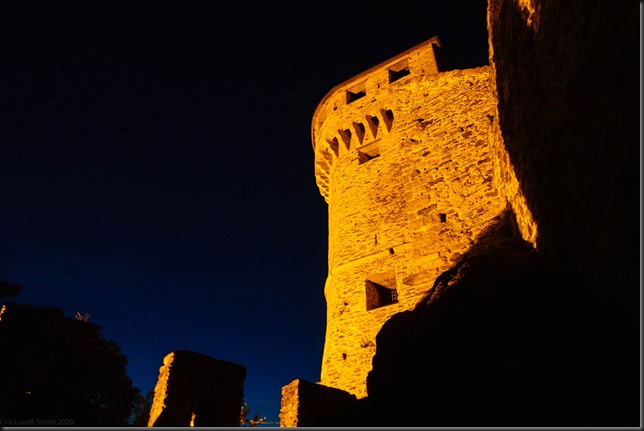 Above: The town was interesting with lots of little nooks to explore. It was nice European “old town”. Near our Air BnB, further up the hill, there was this castle. We went to concert there one night. The concert wasn’t up to much but they did have delicious food which I ate a lot of.

The next day we did another canyon which was again fun. The only issue was the last three long technical abseils. Jeremie went down first and called us on Rachel’s phone to suggest that we walk instead. Craig and Alec went down to Jeremie and Verena, Rachel and I walked.

We drove to Lake Como after finishing the canyon. Rachel and Jeremie headed off towards Chamonix and Patrick had already left a day earlier.

We had a nice little Air Bnb up in the hills some way from Lake Como. We went walking the following day and then Verena and I drove back to Lindau and she continued on North. 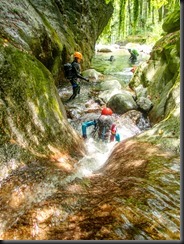 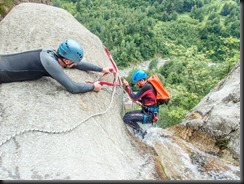 Above left: On our last day after leaving our Air BnB we did an easy canyon with some slides and short abseils. Above right: The canyon had started out easy but ended in a couple of very technical abseils. Jeremie went down first, then Alec, and Craig. Verena, Rachel and I took an escape and walked down. Although we had to go back up to rescue the rope which had got stuck in the top anchor. 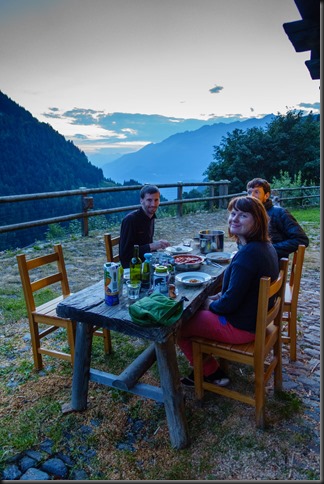 Above: Jeremie and Rachel had to leave for Chamonix. Craig and Alec convinced Verena and I to continue with them to Lago di Como. Alec had booked an Air BnB right up in the hills away from the lake. It was nice. We ate our dinner outside in the evening.