Philipp, Julie, Ari and I headed to Schuttannen on a warm Autumn day. We packed our climbing stuff onto our backs and headed to the Löwenzähne climbing area. I was carrying everything including the kitchen sink as usual.

We arrived before the sun had reached the bottom of the route but we were soon climbing over warm sun drenched rock. I lead the first pitch and was instantly reminded about the alpine bolting feeling of the climb. Philipp and Julie followed the topo and started a little to the right and did a slightly different first pitch. I met them at the first anchor. There was a second anchor there and I set up there and belayed Ari up. Due to her skiing accident at the start of the year she was not going to lead any of the pitches. We swapped around and continued up after Julie and Phil. Julie had lead the second pitch which has the crux (5-). I remember it from last year with Johannes and the year before with Leonie. It’s super polished and scary due to the bolting. I got through the pitch and arrived to find Julie belaying Phil on the 3rd pitch. I set up and Ari came up after. The third pitch has no bolts but is easy. Phil had placed a friend and I placed an extra sling and we were then up to the first tooth of the “Lion’s teeth”. 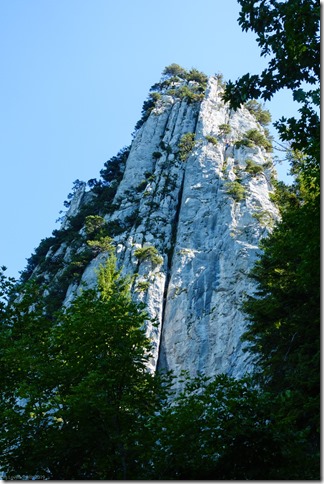 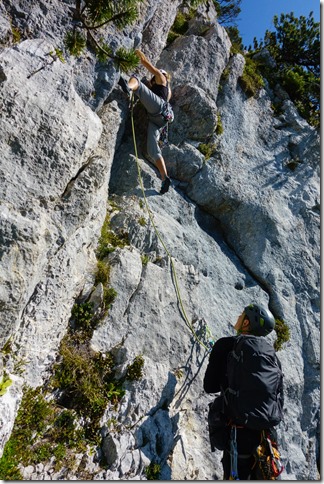 1)We had a 40 minute (or around about that) walk from Schuttannen where we had parked to the Löwenzähne. They are huge towering towers, “the lion’s teeth”.

2) Julie lead the first pitch with Phil to the right and I lead the pitch directly up the “kante”. 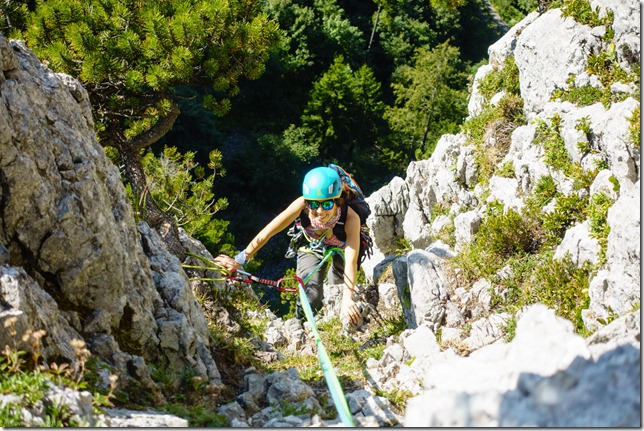 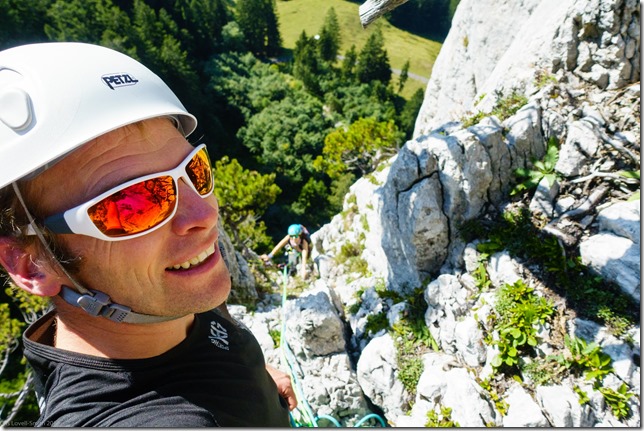 1) Ari came up in nachstieg as she didn’t want to risk any falls on her injured knee.

2) The towers are airy and spectacular.

Phil and Julie were already near the start of the fourth pitch. It’s a small walk along a narrow section to the start of the pitch. Johannes and I bailed last year after watching some people on this pitch. Ari and I sorted out our rope and walked over to watch Phil struggle to remove a nut that Julie had placed as a dummy runner at the beginning of the pitch. After perhaps 15 minutes he was successful. I lead the pitch again. It was a bit scary but ok.

I arrived at the anchor and found the others there trying to work out how to proceed. The anchor was just a single ring and Julie had backed it up with a sling through the rock. I waited while Phil started climbing. The pitch began with a short down climb and then a stretched splits type move to a parallel rock face. It was basically a large crack that you had to climb into then bridge across to the other side. Phil managed it and then lead the rest of the pitch with its sparsely placed bolts. 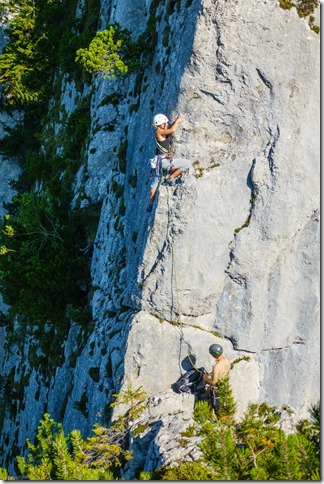 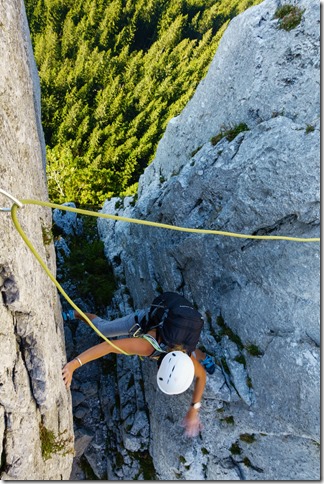 1) Julie got into the pitch from the middle abseil point. Johannes and I had bailed here last year and abseiled down to the right. Leonie and I had also exited here the year before after trying a different route around to the left slightly above where Phil is standing. If you look down to the left from where Julie is you can see the tops of the trees far far below.

2) We spent a long time trying to decide how to cross this crack. The problem in leading it was that you were first down climbing then you bridged across to the other side of the crack and began climbing again. The first bolt was higher meaning if you fell you’d fall into the rope and then smash into the belayer’s side of the crack. I certainly didn’t like this part of the climb and was happy to get to the first bolt on the pitch. It also caused problems for the climber on top rope for similar reasons. A fall meant falling into the crack and smashing against the side wall.

It was a bit difficult to second it as the rope, if it were too tight, would pull you down to the other side of the crack and if you slipped you would swing down and hit the other side. This was a bit suboptimal for Ari. Once Ari reached the anchor I explained the situation. One option was for us both to abseil into the crack. The base was large enough that you could walk around a bit and belay from there. I climbed into it once a few years ago while climbing with Leonie. The problem is there is no anchor so although you are kind of on the ground in a way, you can’t secure yourself there.

We decided against abseiling as if I slipped near the edge before clipping the first bolt it might be possible to fall out of the bottom of the crack and plummet 50 m to the ground below. Instead Ari came up with a cunning idea to create a system of slings. I threaded a bit of prusik cord through a hole in the rock and we attached a “maillon”. Ari attached a million slings. The idea was she would climb into the crack attached to the sling then sit in the rope so she was pulled into the middle of the crack. She’d then fight over to the other side and grab the first bolt and remove the slings. 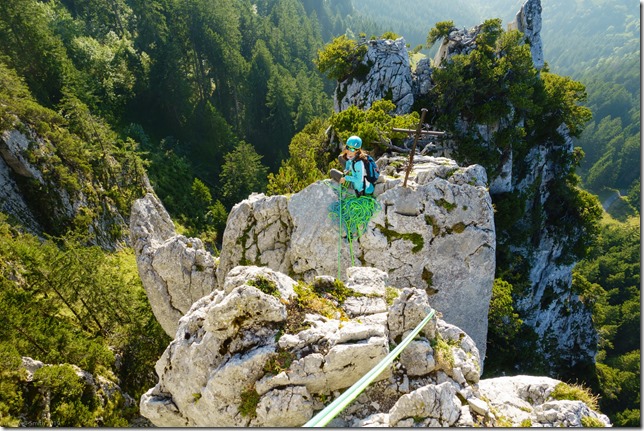 1) Julie and Phil waited for us at the top of the highest tower while Ari and I tried to sort out the problem of crossing the crack.

2) Ari belaying me from the other side of the crack. You can see the drops on each side of the towers giving a very airy feel.

I climbed into the crack. For me it was pretty easy to bridge across. I didn’t like the next part though due to the distance between the bolts. The climbing was easy though and the holds were big, just that you couldn’t afford to fall. I arrived at the top of the last pitch and set up to belay Ari. She managed the spalter (crack) very well and had a bit of trouble with the slings. I was hoping like crazy something wouldn’t go wrong here as how would the rescue look? She climbed up to the top where the three of us were sitting.

It wasn’t so long before sunset and we set about checking out the abseil route. We decided to do it in two pitches although the topo says it is possible with 50m half ropes in one. We didn’t feel like throwing the rope off the side and hoping it was down. Phil went first and started setting up the second rope for the second abseil. I went last just as the sun was setting. The second abseil was short but dodgy as it was from a bolt. The topo says there is a ring there but we couldn’t find it. 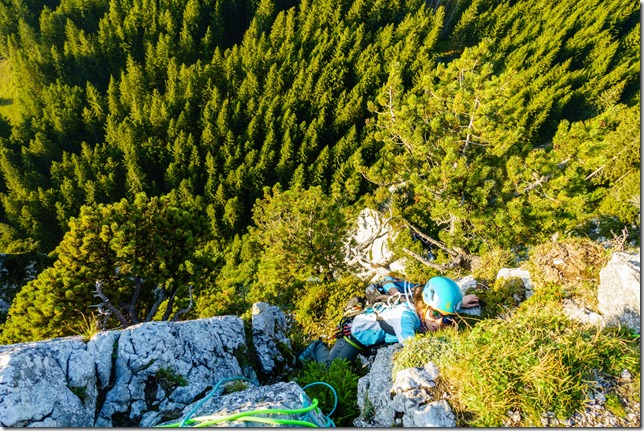 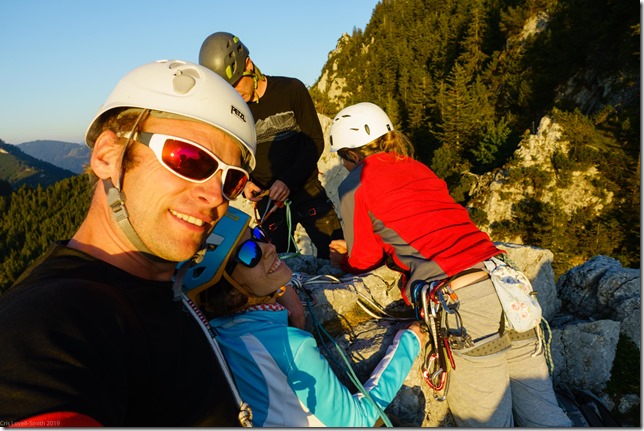 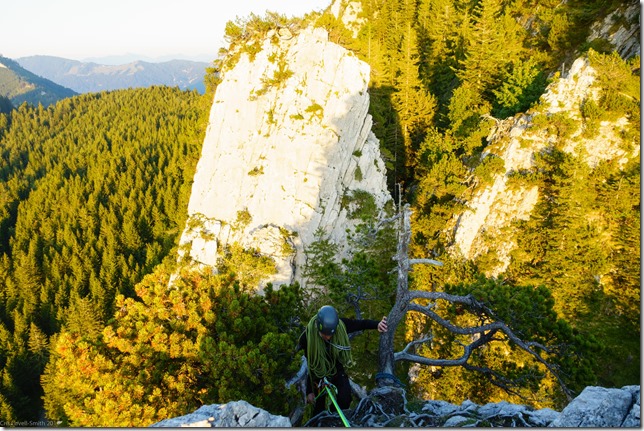 2) Us all at the top getting ready to abseil before the sunsets.

3) The sun was about to set. Phil abseiled first and set up the second rope using a bolt for lack of any other place to anchor.

Phil and Julie took the path through the forest back to the car and Ari and I headed back down to the first pitch to collect the rest of the gear including the piles of food I had hauled to the start which we hadn’t eaten. We had taken wraps with us on the climb thinking we’d eat them at the summit but in the end we didn’t have enough time. The rest of the light vanished and Ari and I walked back to the car under the stars.

A good day out with some scary bits. 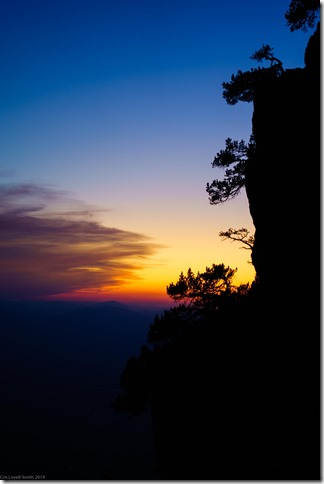 1) Ari and Cris just before sunset.

2) The rock looked amazing silhouetted against the sunset. 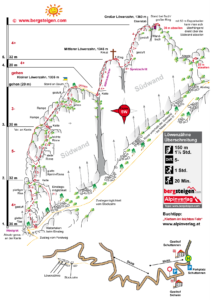 Above: The topo from bergsteigen.com