Leonie and I drove down early yesterday morning to the Ossiacher See in Kärnten Austria. We had entered the Tour de Kärnten. Actually we entered the race in 2014 but I was sick in 2015 so we couldn’t ride. Unfortunately, since 2014 we seem to have got old and slow. Probably fat too. Leonie was already complaining that her legs were sore yesterday before the race had even began. A bad omen.

So, anyway, the weather was nice. We started in Ossiach. The first 10 km or so were neutralised. I was already feeling like I had no energy during the neutralised section. Oh dear. After the Imst disaster a couple of weeks ago I tried a different tactic and decided to not push too hard on the first hill. This didn’t seem to help though and my heart rate was still pretty high hanging around 185 bpm.

I enjoyed the first descent and felt ok on the second ascent. The second descent is really nice. Fast with a few corners to spice things up. Sadly my legs ran out of juice not long after the magical 60 km mark and I lost a few bunches and rode slowly to the finish line. Nice views of snow capped hills in the distance though and everything so green.

I felt pretty grotty at the finished and crumbled into a heap at the finish line with a bowl of pasta to wait for Leonie. She turned up not long after me and we rode back to our camping ground at the lake.

Oh dear… what has happened to me. Despite eating a lot I ran out of energy again… Meh. My new Garmin Edge 520 also confirmed that I suck at the finish line telling me I need 3 days to recover…

Then Strava rubbed it in by comparing my ride to the last time I did the race and showed me a few segments where I was a few minutes slower this year. 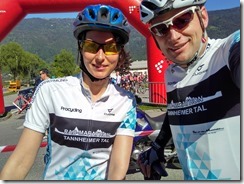 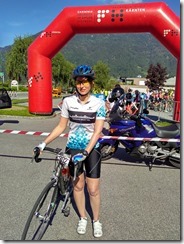 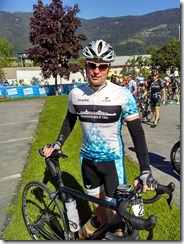 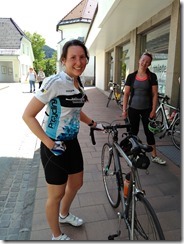 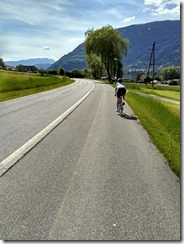 Above left: Me at the start. Above: Leonie after finishing looking much more alive than me. Above right: Riding back to the campsite.