“Dach der Tour”, Stage 3 of the Tour de Kärnten. The stage has two major climbs. The second right at the end which is quite nasty. It’s around 78 km with officially around 2000 m of climbing (although my Edge reckons it’s just 1800 m) and the profile looks a bit like this…

I was demoted to the B start block. I rode the first hill at a moderately ok pace. Our bunch then crawled along on the flat, which suited me fine as I felt rubbish. Then I got dropped entirely climbing up to Hochrindl, the top of the tour. I then crept along towards the finish and got dropped again on the last climb by a bunch that had caught up. 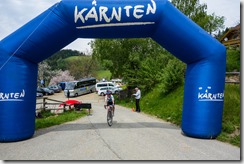 Above: This is what Strava thinks of the whole sorry affair.