Between Stage 3 and 4 there was a rest day. Leonie got some of her studies done and I rode around Bolzano looking for new cycle shorts.

We got up at 5 am as today’s stage started in Bruneck. It was going to be hot, as usual but the temperature was still ok as we cycled to the usual start area. We took a bus from their to Bruneck and at 9 am the race started.

We cycled up a valley that Thomas and I had driven up a few weeks back while we were in the dolomites for our training week. It was the usual snail’s pace. Actually some snails are probably faster.

We had a food stop and then continued towards Passo Valporola. The timed section began just before the last steep climb to the pass. Leonie had already started and I took a short break to drink some water.

I cruised past the hordes and caught up to Leonie near the top. The timing finished below the pass and we had a short ride to the refreshments at the top of the pass. 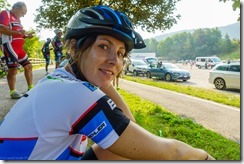 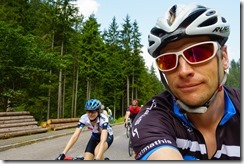 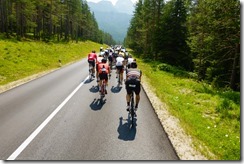 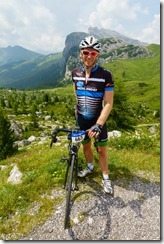 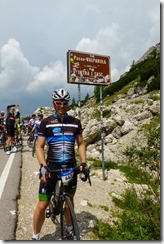 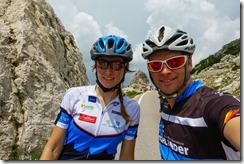 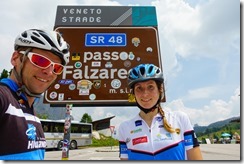 Keen to avoid another slow decent and mindful that the weather seemed to be deteriorating we left before the race car and rode down to Cortina more or less at our own pace. Not long before Cortina it started to rain. I stopped and put on my jacket and continued. Leonie was waiting ahead and we continued together to Cortina. We found a spot beside the road under the eaves of a house and waited. Instead of the rain easing it got heavier and heavier. 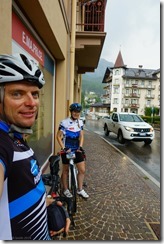 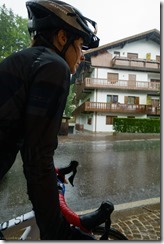 The group wasn’t following, just a handful of cyclists. After perhaps 20 minutes it cleared a little and the lead race car came by with about 15 cyclists behind it. Leonie decided to join but I wanted to wait until the rain stopped entirely. It didn’t though. Instead it got heavier again and windy and at some point it started to hail a bit. I gave my riding jacket to a guy who was shivering uncontrollably and we waited. We started again later but they had decided to reroute the race through the quicker route missing out the Drei Zinnen and the Tre Croci pass. I thought I’d missed out on the pass and that the riders who’d gone through earlier had ridden over the pass but it turns out nobody had gone the intended route.

It was quite nice to ride right at the back as I could ride my own pace. I time trialled along passing stragglers. The route took us through a gorge and we ascended to a low pass. I caught up to the main bunch after a while and rode back on and then sat in the bunch until we got to our lunch stop near Dobbiaco. Leonie was already there having arrived much earlier with just a handful of cyclists.

We opted to ride back at our pace before the race cars and ended up cycling with a group of perhaps 30 or 40 cyclists. We cycled along the main road mixing with the traffic which at times was a bit hairy. It was still grey to begin with but it improved as we progressed. The highlight for me (and something I’ll remember from my time in Europe) was leading the bunch over, perhaps, the last 10 km to Brixen. At one point I looked behind in a long corner to see 40 cyclists strung out behind trying to stay with me. I didn’t feel like I was pushing very hard but it seemed to be enough. I had to keep checking my pace so I wouldn’t ride off the front. It’s the best feeling in the world to feel fit and like your body is working as it should.

Not far before Brixen we had a huge tail wind and then a descent. The guy behind me couldn’t keep my wheel so well. His friend said something to him in Russian and he asked in English “do you need a change”. Nope my legs were fine and we continued our speedy approach to Brixen. After the descent the bunch gathered at a round-about. The Russian guys seemed pumped. One excitedly said to me “that was a great group ride” and another Russian guy, “thanks my friend”. I guess they probably also enjoyed riding a descent pace instead of the wombly speed we normally ride behind the race car.

We waited for the bus for a bit before driving in pouring rain slowly back to Bolzano.

We got out of the bus in Bolzano back into the heat and cycled to our camp site in the fading light. Another massive storm came through in the evening and Leonie and I sat in the tent hungrily devouring a fruit salad with yogurt followed by crackers and cheese. The temperature dropped with the storm and so did large balls of hail.